Debt resolution process should aim at keeping a company alive 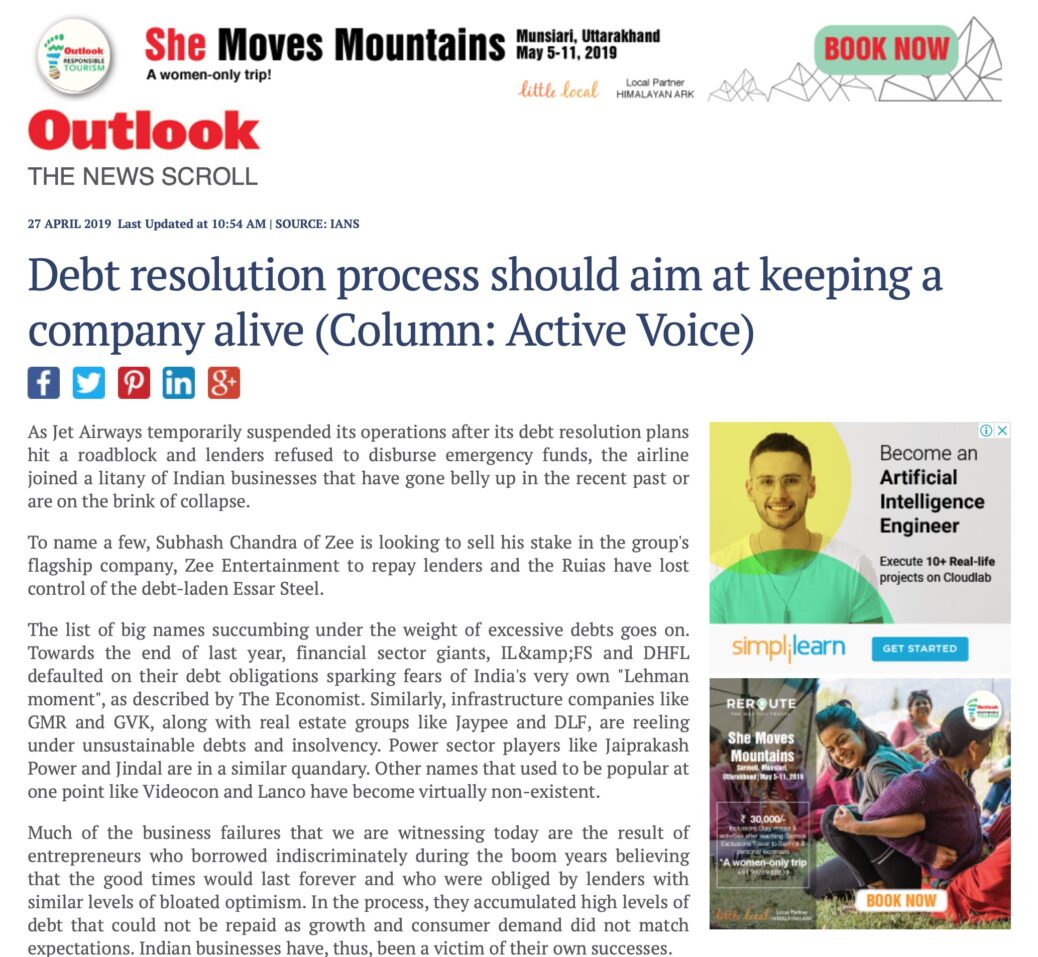 Debt resolution process should aim at keeping a company alive

As Jet Airways temporarily suspended its operations after its debt resolution plans hit a roadblock and lenders refused to disburse emergency funds, the airline joined a litany of Indian businesses that have gone belly up in the recent past or are on the brink of collapse.

To name a few, Subhash Chandra of Zee is looking to sell his stake in the group’s flagship company, Zee Entertainment to repay lenders and the Ruias have lost control of the debt-laden Essar Steel.

The list of big names succumbing under the weight of excessive debts goes on. Towards the end of last year, financial sector giants, IL&amp;FS and DHFL defaulted on their debt obligations sparking fears of India’s very own “Lehman moment”, as described by The Economist. Similarly, infrastructure companies like GMR and GVK, along with real estate groups like Jaypee and DLF, are reeling under unsustainable debts and insolvency. Power sector players like Jaiprakash Power and Jindal are in a similar quandary. Other names that used to be popular at one point like Videocon and Lanco have become virtually non-existent.

Much of the business failures that we are witnessing today are the result of entrepreneurs who borrowed indiscriminately during the boom years believing that the good times would last forever and who were obliged by lenders with similar levels of bloated optimism. In the process, they accumulated high levels of debt that could not be repaid as growth and consumer demand did not match expectations. Indian businesses have, thus, been a victim of their own successes.

On the flip side of the argument, the lenders to these businesses are in an even worse shape than them. The public sector banks are surviving on life support of trillions of rupees from the government but their NPA levels are still rising and have now reached double digits.

While bank lending has consistently slowed due to these reasons in the last few years, non-banking financial companies (NBFCs) proved to be an alternative source of funding to the commercial sector. They have grown at an exceptional rate in the last few years, doubling their assets in the last five years. However, since the IL&amp;FS crisis, they have also become restrained in their approach. Thus, the system-wide credit growth has slowed sharply.

The situation has left the government in a conundrum. Privatisation of banks, which is often put forward as a solution, is not the answer seeing how they are not immune to management issues as well. Most recently, Chanda Kocchar of ICICI Bank had to step down after reports of conflict of interest between the bank’s activities and her husband’s businesses emerged. Also, it must be noted that the 2008 economic crisis in the US was the product of recklessness of private financial players. So, privatisation of banks cannot be the answer. The government can possibly attempt to address the logjam in the NBFCs, but that would create a problem of moral hazard, which is undesirable.

A resolution of India’s never-ending debt situation is needed urgently. A sell-off in global markets or any signs of an economic crisis could easily trigger a new wave of panic. The Indian economy is not as resilient as it was in 2008 to weather through a crisis. Strong domestic demand at the time had kept the economy afloat for a few years after the crisis. However, currently the Indian economy is experiencing the opposite as consumer demand is extremely subdued. Auto sales, which are a good proxy for the same, were at a five-year low at the end of the last financial year.

The country’s fiscal situation is also far from comfortable despite the efforts by the central government to reduce the deficit over time. This is because the state governments have been running excessively high fiscal deficits, which has resulted in India’s overall deficit being among the highest in the world. Thus, it is India’s best interests to get its debt issues, both governmental and private, in order before crisis strikes.

The Insolvency and Bankruptcy Code (IBC) has been a good initiative to improve the credit culture as it has reduced the time of resolution, improve the recovery rate and given creditors more power over defaulters. However, alongside debt resolution the process should also ensure that companies do not undergo avoidable value destruction. A major criticism of the IBC has been that businesses which enter into formal insolvency are pushed into liquidation rather than restructuring. Until September 30, 2018, about 80 per cent of the cases admitted to insolvency resolution ended in liquidation.

While the IBC process needs to be hastened to free banks of piling debts so that they can resume lending activities before it is too late, the resolution process also needs to be shifted away from value destruction and more towards keeping the firm alive as a functioning unit. The necessity of the latter has never been clearer than in the case of Jet Airways, whose sustenance – despite all management errors by Naresh Goyal – is necessary because in excess of 20,000 jobs are at stake.

The article was published with sify.com, Dailyhuntand Outlook Indiaon April 22, 2019.