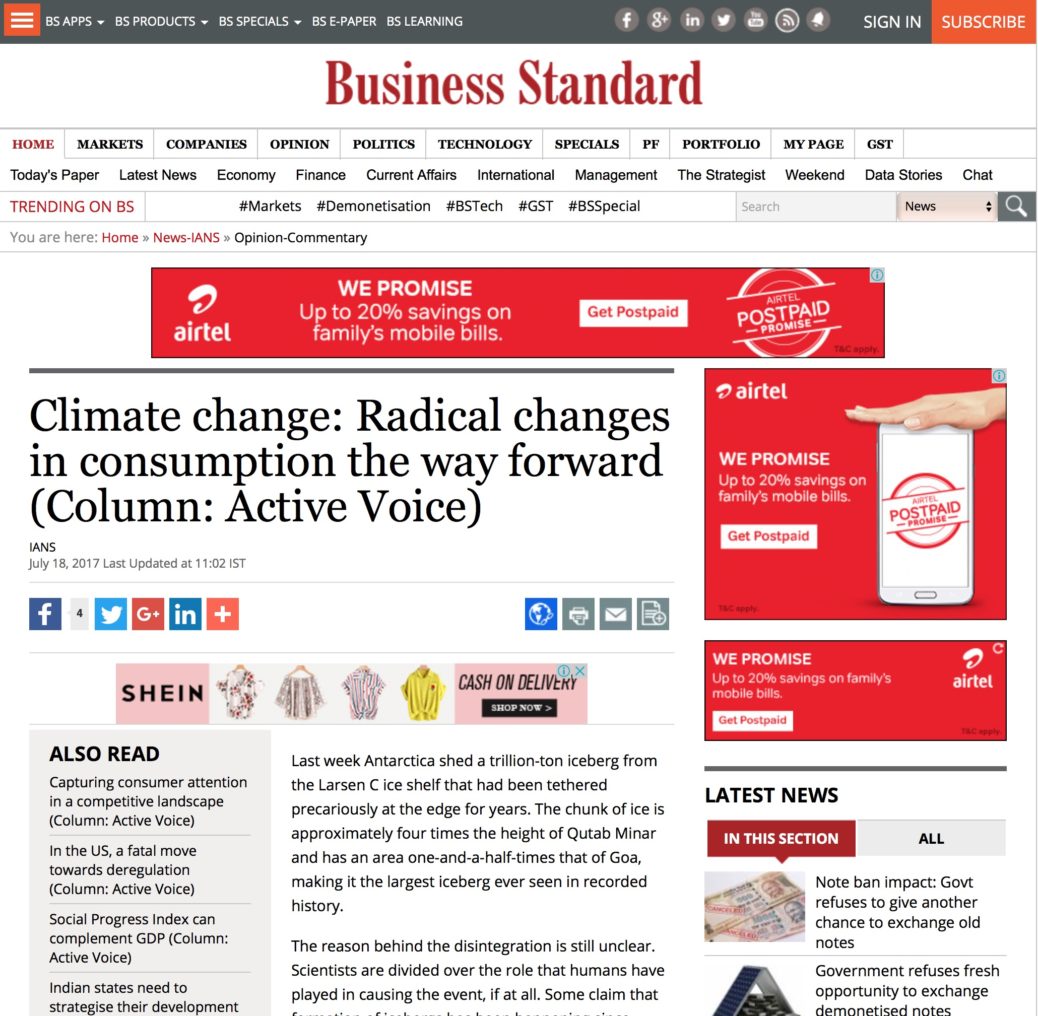 Last week Antarctica shed a trillion-ton iceberg from the Larsen C ice shelf that had been tethered precariously at the edge for years. The chunk of ice is approximately four times the height of Qutab Minar and has an area one and a half times that of Goa, making it the largest iceberg ever seen in recorded history. The reason behind the disintegration is still unclear. Scientists are divided over the role that humans have played in causing the event, if at all. Some claim that formation of icebergs has been happening since centuries and has little to do with global warming. Nevertheless, even if this is considered to be a natural event, the erosion has followed two previous collapses of smaller magnitude in 1995 and 2002, and any move towards global warming will only hasten such events. In such a scenario, the dreaded march of climate change will result in rising sea levels and have potentially disruptive and disastrous consequences around the globe.

As per the IPCC, the average rate of ice loss from Antarctica has increased from 30 billion tonnes a year between 1992 and 2001 to 147 billion tonnes a year between 2002 and 2011. As a result, sea level rise, which was linear in the 20th century, is expected to be exponential in this century. The matter should be of serious concern to India as the country possesses a 7500-km long coastline, which is home to a significant proportion of coastal communities. The land in Sundarbans is already receding, and numerous people have lost their homes multiple times due to rapid erosion. Farmers are being forced to migrate in thousands. The situation will be unmanageable when it extends to the entire coastline.

In light of these concerns, Trump’s withdrawal from the “unfair” Paris agreement seems reckless, narrow and utterly destructive. Historically, the US has added disproportionately to the rising concentration of greenhouse gases and is still the biggest per capita emitter of carbon dioxide – more than twice the rate of China and ten times that of India in 2013.

Moreover, the idea of looking at country-wise emissions underestimates the contributions made by countries like the US to global warming. Most of the discussions on environment fail to mention “consumption,” which is the singular economic driver of climate change. Per capita consumption level of countries reflects a more accurate picture of a country’s contribution to global emissions since merely measuring emissions assumes away trade implications. When a country imports goods from the rest of the world for consumption, the emissions made in production and transportations of those goods should be added to the overall emissions of that country and not the manufacturing one. The opposite needs to be done for exports.

Since the US had a trade deficit of $502 billion in 2016 and China had a trade surplus of $486 billion, the emissions for the former are clearly understated, and those for the latter are overstated. The Global Footprint Network estimated that if the entire earth consumed as much as an average US citizen, four Earths would be needed to sustain them. The same estimation for China came out to be 1.1 earths and almost half an Earth for India.  Therefore, the US owes it to the world to stick to the Paris commitments and take a lead on it by helping the developing world adopt green technology.

Nevertheless, averages are somewhat misleading. When consumption levels at different income groups are disaggregated for Indians, the top five percent amounting to about 60 million consume as much as an average European, and their rate of consumption is documented to be growing at an alarming rate. Moreover, they set the aspirational bar for most Indians, which has a cascading effect of increasing consumption level along all income levels.

Therefore, since consumption is the foundation of all greenhouse gas emissions, focussing on curbing unnecessary consumption becomes a greater goal than attempting to limit emissions. Lower consumption implies lower emissions and not the other way around. For instance, skipping your next flight for a meeting and hosting a video conference instead will reduce emissions at a faster rate than fuel-efficient planes. This is not to argue that the goal of reducing emissions is not noble in itself but only to point out that encouraging efficiency in consumption might be more effective.

Moreover, the mere use of technology cannot make consumption efficient. Jevons Paradox dictates that even though technological progress increases the efficiency with which we use resources, we tend to use more of it. So, for instance, if electric cars reduce emissions, we’ll tend to drive longer distances simply because we save more on fuel consumption. This implies that only a conscious shift in attitudes, behaviour and habits can save us from ourselves.

The steady collapse of the Antarctic ice shelf is a jarring reminder of the urgency required in building a sustainable lifestyle for ourselves and the need to wrestle with our multiple vested interests. The US more than any other country requires to adopt radical lifestyle changes and decouple human well-being from economic growth and consumption. However, the upper-income strata in the developing countries are equally liable. In fact, their activities put the world at higher risk since their consumption engender more consumption at other income levels on a scale that the planet can simply not afford. Dealing with needless consumption is, thus, the crux of the challenge in the fight against climate change.

The article was published with Business Standard on July 18, 2017