Poverty in Numbers: What does the data tell us? 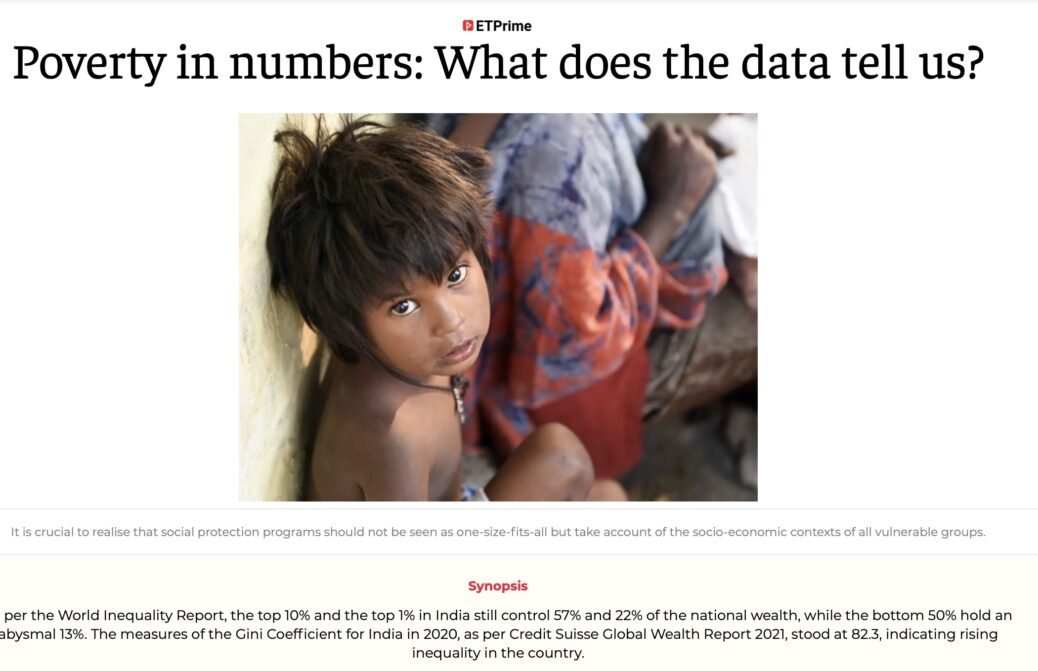 Any conversation on poverty and inequality reveals to us the disproportionate impact the pandemic has had on people’s lives in the last two years. It is easy to discern that the virus exacerbated the existing inequalities and limited the results of social protection systems across the world. When the normalisation of inequality guides our narratives, any mechanism towards social security will fall short of achieving its actual goals. Inequality breeds not only deprivation but also injustice and restricts an individual from exercising their capabilities and their rights. The pandemic-induced effect on reducing people’s living standards across the globe is apparent. Despite active interventions towards poverty reduction through alleviation and assistance programs catering to rural, suburban and urban populations, the vulnerable continue to live with deprivations. India alone witnessed the massive migrant flight back to their villages in the face of employment and food insecurity caused due to the lockdown.

Targeted efforts towards poverty reduction did not necessarily lead to a significant change in the distribution of wealth in the country. As per the World Inequality Report, the top 10% and the top 1% in India still control 57% and 22% of the national wealth, while the bottom 50% hold an abysmal 13%. The measures of the Gini Coefficient for India in 2020, as per the Credit Suisse Global Wealth Report 2021, stood at 82.3, indicating rising inequality in the country.

Additionally, the Poverty and Equity Brief released by the World Bank in October 2021 showcases that India has recorded an unemployment rate of 11.8% in the first half of 2021. As the World Bank calls it, a partial recovery at 8.2% did not translate into a reduction in absolute poverty. National Multidimensional Poverty Index released by NITI Aayog has established that India is multidimensionally poor, with Bihar as one of the poorest states in the country. The Index seeks to measure poverty based on non-monetary pillars like education, health and standard of living. Further on, the report includes segments like nutrition, child mortality, antenatal care, access to clean drinking water, cooking fuel, sanitation etc. The Index has successfully accounted for measures beyond income distribution; however, it still falls short of being genuinely comprehensive.

Based on the 4th round of NFHS data (2015-2016), the Oxford Poverty and Human Development (OPHD) have released a Global Multidimensional Index with India briefings that have revealed damning results for the country with 27.9% of the population living in poverty. Even before the Pandemic, the report released by the OPHD Institute in 2018 showcased that the lower castes and tribals continue to remain at the bottom. In 2021, the Scheduled Tribes accounted for 9.4% of the poorest of the poor, with 65 million people living in multidimensional poverty. As per the 2018 report, 70% of districts in Bihar were living in extreme poverty, while 60% of all districts in the country reflected acute poverty. By 2021, 22.4% of the population in Bihar is living in severe poverty, with 52.5% of the people living in absolute poverty as per headcount ratio, the highest in the country. Jharkhand closely follows at 15.5% and 46.5%. A continued decline in the performances of these states coupled with increasing vulnerabilities of the people living here is symbolic of the rapidly rotting core of policy planning and implementation as far as poverty alleviation programs are concerned. Moreover, it highlights our inconsistencies in achieving a model that gives precedence to systemic resistors to growth, development and equality right from an individual level. With the top 10% accumulating at least 20 times what the lower 50% has, the issue is not only income distribution but a system where oppression of the majority is beneficial to the success of a minority. These disparities coalesce together to keep in place the cycle of violence and deprivation for the poor.

What do these numbers tell us? In a year already marked by suffering and loss, these figures depict the depth of inequality in our country. Caste-based discrimination has further pushed the marginalised groups towards poverty. At the level of states, it is clear that some states have not performed and continue to deal with severe poverty, emphasising the need to take targeted decisions that specifically engage with the contexts of poor growth in those states. It is crucial to realise that social protection programs should not be seen as one-size-fits-all but take account of the socio-economic contexts of all vulnerable groups. The idea behind challenging the existing narrative is to understand growth holistically and not just focus on industrial development. The needs of a society are better served when there is ease and meaning to their everyday life. Inequality is not a choice, and so all our decisions towards eradicating inequality and poverty should cater to a comprehensive model that looks at increasing accessibility to resources and their utilisation capacity. By putting the interests of the vulnerable first, we are looking at a growth metric that ensures maximum benefits for all and not a few. If the pandemic has taught us anything, it is that there is nothing natural about inequality. Instead, it is a vicious cycle that produces inter-generational deprivations that need to be broken now.

The article was published with Economic Times on February 12, 2022