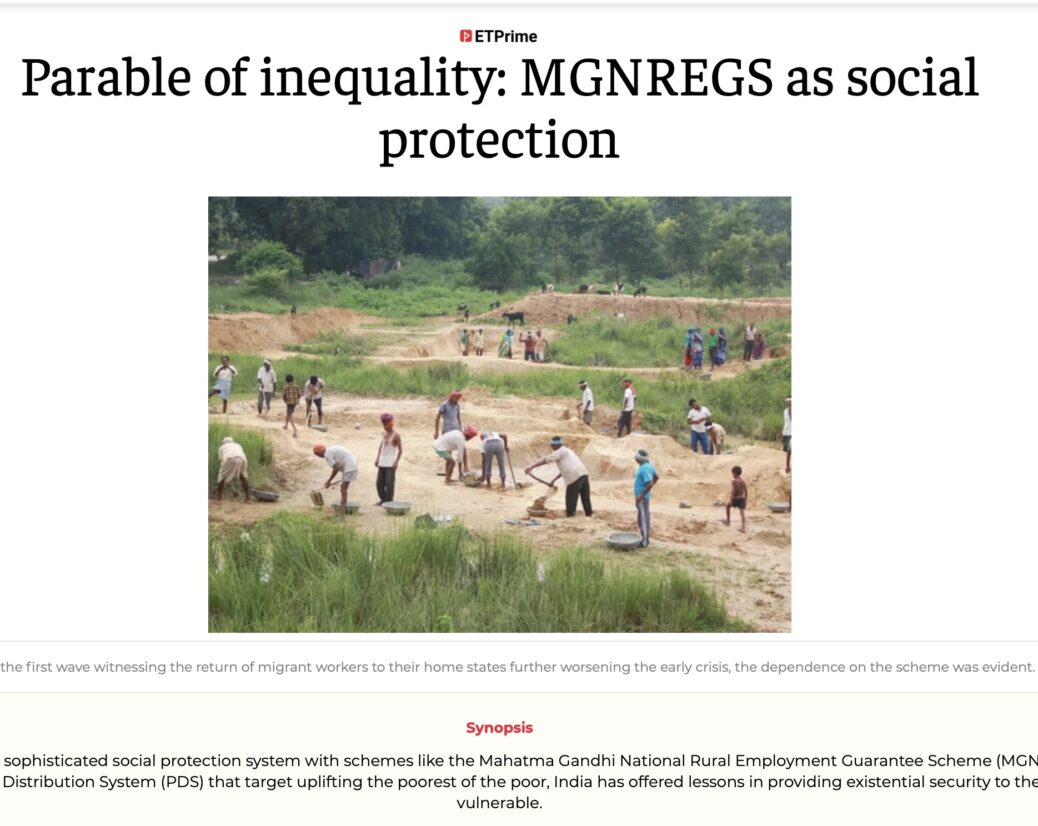 The pandemic has set global social progress behind several years and exposed new groups of urban-dwelling people with higher education to the risks of descending into poverty, thereby changing the poverty profile. It has also halted the sustained yet uneven progress towards reducing gross inequalities and poverty eradication as per the Sustainable Development Goals. Regions prone to armed conflict and disasters due to climate change have already recorded an increase in the number of people living in poverty, even before the pandemic. According to the World Bank, South Asia and Sub-Saharan Africa contributed 85% of the world’s poor in 2015. Notably, South Asia and Sub-Saharan Africa also happen to be the regions with a concentration of economic inclusion programs as part of the social protection systems, according to the State of Economic Inclusion Report 2021. Of the total 90 million people covered in social protection schemes globally, Sub-Saharan Africa accounts for 30% of people served, while South Asia hosts 66% with massive reach in India and Bangladesh. Some projects, as per the report, like JEEViKA, an initiative by the Government of Bihar for poverty alleviation, cover 51% of the population. In this background, the pandemic has only been a loud reminder, if not a clarion call, to assess the comprehensiveness, coverage and adequacy of social protection systems worldwide. Social protection systems should be emphasised in a world where most of humankind is not resistant to socio-economic shocks, lives on the brim of poverty, and any volatile situation could push them into abject conditions. Approaching social security as a human right enables us to construct social protection systems that empower social and economic inclusion. Social protection systems might not be the one-stop solution to eradicating poverty, but it offers a cushioning effect against radical socio-economic changes to make people more resilient to sudden shocks. The indispensability of these programs is also evident from the massive rollouts of aid and assistance as the pandemic set in.

Through its sophisticated social protection system with schemes like the Mahatma Gandhi National Rural Employment Guarantee Scheme (MGNRES) and Public Distribution System (PDS) that target uplifting the poorest of the poor, India has offered lessons in providing existential security to the most vulnerable. MGNRES, launched in 2005, has been one of the most ambitious social protection schemes to be implemented globally. The social security scheme aims at providing 100 days of wage employment to every household in a financial year whose adult member is willing to do unskilled manual work. 8.8% of global working hours were lost in 2020 due to job losses in the face of economic uncertainty with the onset of national lockdowns. As per ILO’s World Social Protection Report 2020-22, the lost working hours are equivalent to 255 million full-time jobs, adversely affecting the unskilled or low-skilled labour on whom the loss of employment fell hardest. This not only aggravated socio-economic inequalities but will have enormous ramifications for labour market inequalities in the years to come. In this context, employment generation and financial inclusion schemes like MGNRES offers livelihood security to rural households.

With the first wave witnessing the return of migrant workers to their home states further worsening the early crisis, the dependence on the scheme was evident. Hailed as an exemplary public scheme in one of the most populated countries, where a significant portion of the population benefits from the scheme, the stakes on MGNRES are huge, tested during the early waves of the pandemic. In 2019-20, a cummulative140,719,967 cr job cards were issued to registered households, while in 2020-21, 154,287,504 cr job cards were issued. The fact that 2020-21 saw a nearly 10% jump in cumulative numbers of households with issued job cards from that in 2019-20 (as per the data provided by the Ministry of Rural Development) is proof enough to show the dependence on the scheme as a fallback option during highly volatile times like the pandemic. Moreover, in 2020, an additional 86,81,928 job cards were issued as compared to 64,95,823 in 2019. In terms of demand patterns in 2020-21, as per the MIS reports of MGNRES, demand patterns fluctuated throughout 2020 in response to economic shifts and imposition of lockdowns and gradual easing of curbs. In April 2020, 13,412,161 cr households demanded employment under the scheme. The number increased to 37,34,50,23, which marked a 178.44% increase. The persondays generated under the scheme also exceeded the projected persondays throughout the financial year with 711,182,450 cr persondays generated up to May 2020, while the initial projection was 676,381,773 cr. Up to March 2021, 3,891,176,983 cr persondays were created. However, the numbers quoted at the national level do not reflect state-level performance, which may reveal gaps in implementation.

These numbers indicate something more profound than the centrality of the scheme in generating rural employment. In extremely fraught times, greater demand of  the scheme exposes the fragility of lives that people living in poverty lead. At the same time, it becomes more important to formulate an urban employment generation scheme that could correct the imbalance between rural and urban employment generation. Moreover, one could hypothesise that had there been an urban employment generation scheme, reverse migration during the first wave could have been halted as people would have a fallback option. Additionally, badly hit sectors like construction, hospitality, and transportation have reduced employment, triggering a labour crisis in urban spaces. An urban employment scheme will only bridge the gap. MGNREGS is not perfect in its entirety but has vast potential in keeping the poorest of the poor households afloat, stopping them from further descending into abject poverty, and perhaps halting the cycle of poverty. With its rights-based program, civil society organisations have also been able to leverage its design for pro-poor targeting. While the program is de-linked with any poverty criteria (i.e. it does not subscribe to the poverty line for eligibility purposes), its social security architecture has focused on “self-targeting” of vulnerable populations and enhancing community-based accountability tools with a more proactive role for the Panchayat.

As ILO envisages, social protection systems need to be developed holistically with an end goal of reducing the vulnerability of people to sudden socio-economic shocks. There can be no perfect social protection scheme, but every nation should take inspiration from  global experiences and understand their national contexts to capture the systemic resistors to social and economic progress.

The article was published with Economic Times on February 18, 2022.