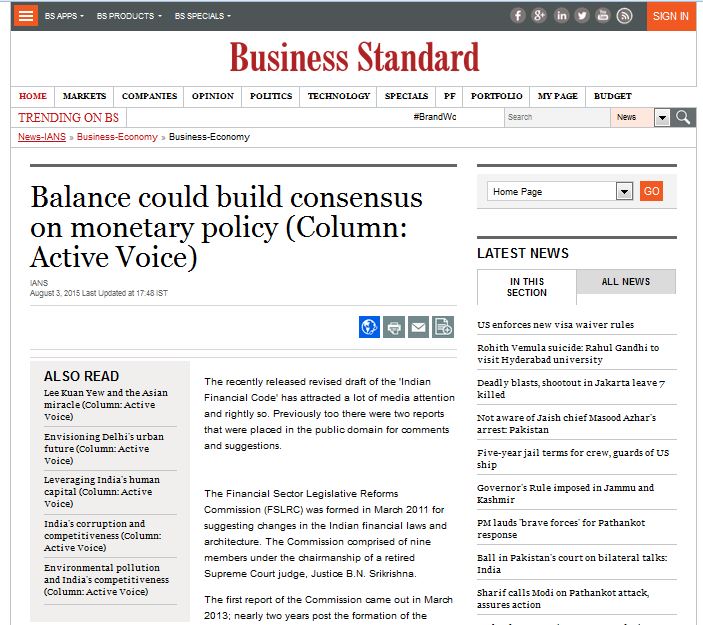 The recently released revised draft of the ‘Indian Financial Code’ has attracted a lot of media attention and rightly so. Previously too there were two reports that were placed in the public domain for comments and suggestions.

The Financial Sector Legislative Reforms Commission (FSLRC) was formed in March 2011 for suggesting changes in the Indian financial laws and architecture. The Commission comprised of nine members under the chairmanship of a retired Supreme Court judge, Justice B.N. Srikrishna.

The first report of the Commission came out in March 2013; nearly two years post the formation of the Commission. It was in two parts: ‘Analysis and Recommendations’ and the proposed ‘Indian Financial Code’. Public comments were then invited on these documents. The present document is revised in light of the comments received by the government on the second part.

The report maintains its basic structure as compared to the previous draft report. However, some modifications have been proposed. The most crucial of these point to the monetary policy committee (MPC) its composition, India’s monetary policy framework and its broad functioning.

At present, monetary policy is solely decided by and is at the discretion of the Governor of Reserve Bank of India (RBI). It implies that the governor has all the necessary powers to decide what stance RBI wants to take on the policy rates. The governor is assisted by his team at RBI and a seven-member Technical Advisory Committee (TAC). The TAC is composed of non-RBI members and their recommendations, at present, are not binding on the governor.

This is like most other Latin American countries where the discretion on the monetary policy is the sole responsibility of the central bank governors. It is also true in the case of New Zealand. These could be defined as countries where the central bank has an upper hand in monetary policy decisions. The other extreme of the spectrum gives more power to external members. Countries like South Korea and Norway, where the composition of external members is greater, follow this more consensual approach to decision making. These countries have a greater say by external experts and government. The middle ground between these two extremes is where the balance often shifts between the government’s and the central bank’s dominance.

The Urijit Patel Committee, in January 2014, subsequently proposed a more favourable balance towards the central bank with there being five members in the MPC. There would be three members from the RBI in addition to two external experts with the RBI Governor being the chairman.

The FLSRC report of July 23 clearly responded with three members for RBI and four external members to be nominated by the central government with no veto power for the governor. It is something that may not go down well with RBI as this is against the institutional independence of the RBI in setting the monetary policy.

The best structure would be one, which takes the professional advice of members, and grants them power at the same time letting the RBI maintain essential elements of independence. The best balance could be a team of six members in the MPC with three being from RBI and three being nominated from outside by the government that may be approved by RBI prior to their appointment. They may also be equal to the members from within RBI in matters of deciding the monetary policy. It will help develop ‘consensus’ critical for monetary policy decisions. Only if there is an ‘extreme circumstance’ can the governor (also a member) decide against the decision of the majority. It is to be limited by the provision that the Governor cannot go against the majority in case all the other members are favoring a particular decision. It means the RBI Governor does not have an absolute veto but a partial one.

It seems like a balance that could help bring greater consensus in monetary policy decisions at the same time not doing away with RBI’s independent role in deciding monetary policy. The months ahead will decide which way the monetary policy institutional framework goes. As for now all the markets can hope for is Governor Rajan calling the right shots tomorrow.

Published with Business Standard on August 3, 2015.