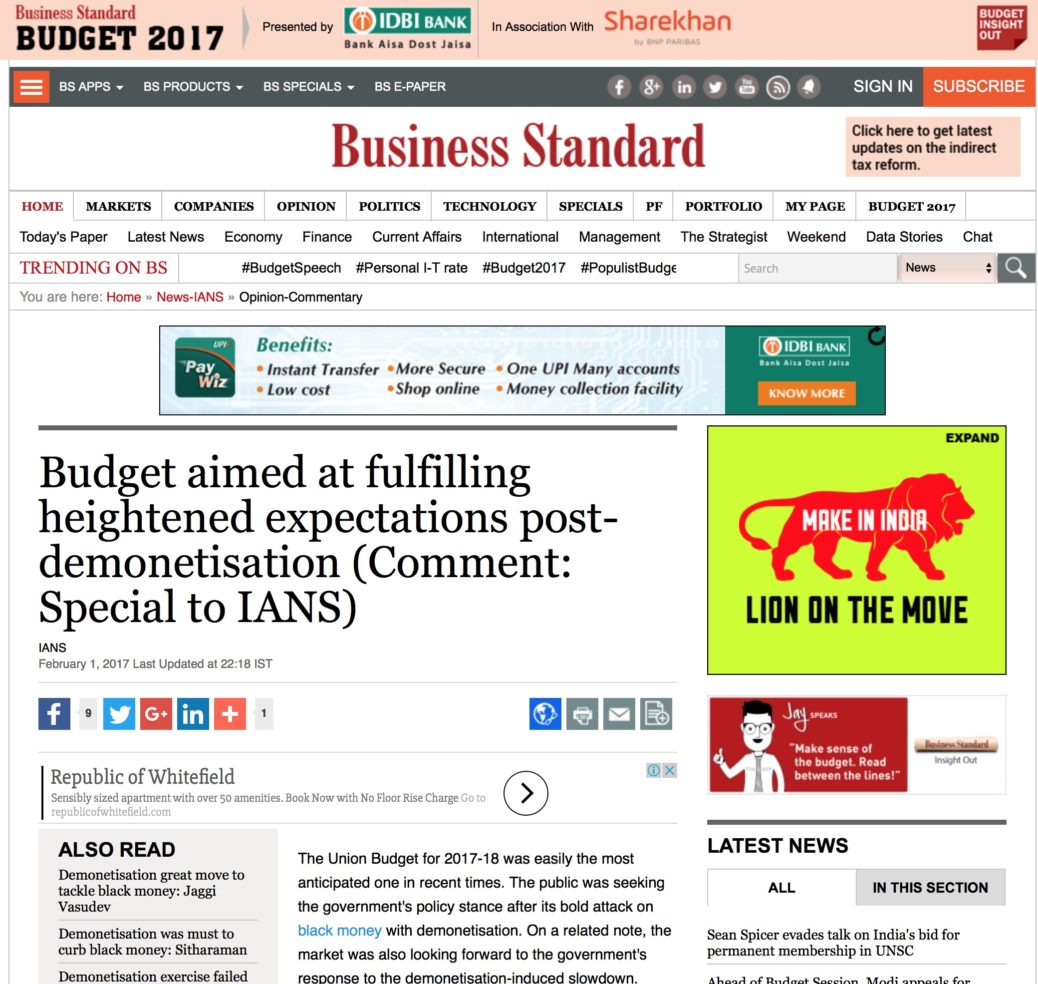 The Union Budget for 2017-18 was easily the most anticipated one in recent times. The public was seeking the government’s policy stance after its bold attack on black money with demonetisation. On a related note, the market was also looking forward to the government’s response to the demonetisation-induced slowdown.

The Economic Survey had also raised expectations of a radical move like Universal Basic Income (UBI). With a wide range of expectations tied to the Budget on a year when growth expectations were low, it was bound to have a few hits and misses.

Coming to the positive aspects, the Budget was high on decibels with its take on black money. It took the fight against black money and corruption to its very root by targeting the funding of political parties. The maximum amount of funding that parties can receive in cash has been reduced to Rs 2000. Besides political funding, the Budget targets big-time offenders that flee the country by proposing a new law to confiscate their assets till they submit to the jurisdiction of the appropriate legal forum. Finally, cash transactions, in general, have been limited to Rs 3 lakhs. The continuity in the government’s anti-corruption stance after the widely debated demonetisation was necessary to take the attack on the stock of black money to its flow in the economy.

Secondly, a similar continuity in the governmenta¿s stand was seen in the area of fiscal consolidation. The government has displayed an unwavering commitment to maintaining a stable fiscal regime since its first Budget for 2014-15, despite temptations to splurge in order to revive a slowing economy. The Budget promises to maintain a fiscal deficit of 3.2 percent of GDP in FY2018 and achieve the FRBM-recommended target of 3 percent in the following year.

This should send a positive signal to the credit rating agencies and attract funds from abroad, which is urgently required in an investment-starved Indian economy.

Third, as per market expectations, the government gave a push to capital expenditure that was needed to stimulate the slowing economy. According to our estimates, the government’s capital expenditure saw an increase of 2.3 percent since the last Budget. Infrastructure witnessed a much-needed push with higher allocations to roads and highways than last year amounting to Rs 97,000 crore. Further capital expenditure was seen in the area of renewable energy with an allocation of Rs 3,000 for nuclear power alone. This fiscal stimulus should partly compensate for the lack of private investments in the economy.

Other positives in the Budget were seen in the gradual nudge towards digitalisation with duty exemptions on cashless transaction in PoS terminals and online rail booking.

Positive steps were also taken towards ensuring affordable housing. A housing coverage of 1 crore was promised under the Housing for All scheme. Further, 100 per cent rural electrification by 2018 was also promised. In another welcome move to encourage entrepreneurship, MSMEs were given tax reductions of 5 per cent.

The latter move should give a slight fillip to muted private investment sentiments in the country. However, that is one area where the Budget could have contributed more effectively. Private investment, which has been at its weakest in recent times and makes up two-thirds of the country’s total investment, needs urgent revival. This was especially needed in the Budget, considering that economic growth is not expected to be high. Moreover, the government is limited by its promise to remain within the FRBM recommendation to replace private investment with public spending.

Higher private investment could have been achieved with a targeted strike on the rising stressed assets of banks. The acetwin balance sheet problem” highlighted by the Economic Survey is impeding the lending practices of over-leveraged banks and thus hurting new investment across the country. In fact, the Budget has allocated Rs10,000 crore for recapitalisation of banks in 2017-18, but the strategy has failed to improve the situation in the past. The government needs to take the Economic Survey’s recommendation of the establishment of a Public Sector Asset Rehabilitation Agency or a similar institute that tackles the problem of stalled infrastructure projects. There is an urgent need to tackle the problem of NPAs head-on before the situation festers and stalls the overall economy in the process.

A second miss in the Budget was in the education and health sector. Since India has one of the lowest spending on health and education, more budgetary allocations are always welcome. However, as it often happens when the fiscal situation is tight, the two sectors were merely paid lip service. A few initiatives within the sector were taken up, but substantiated policy actions to improve the quality of institutions within the sector were lacking. It is high time the Indian government perceives such budgetary allocations as an investment rather than a cost to the exchequer.AAA

All in all, the Budget aimed at fulfilling the heightened expectations that it had generated, especially with the government’s take on black money. However, it is hoped that future government actions address the issues it has left wanting.

On an immediate basis, reviving private investment and dealing with the problem of NPAs need innovative policy redressal to renew the long-elusive Indian growth story.

The article was published in Business Standard on February 1, 2017.

The article was published in The Quint on February 2, 2017.