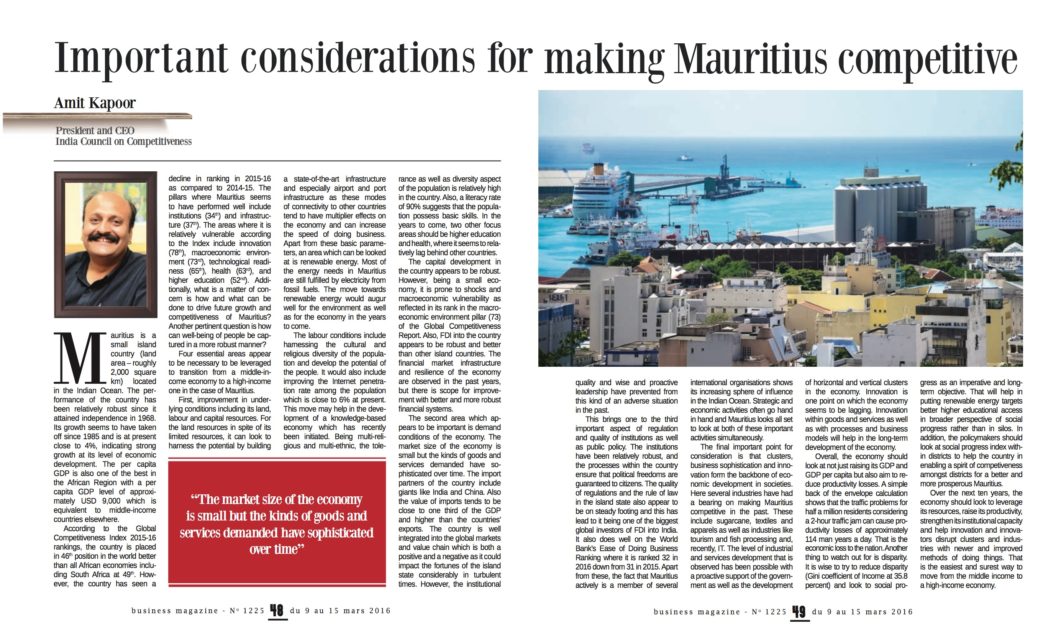 Mauritius is a small island country (land area – roughly 2,000 square km) located in the Indian Ocean. The performance of the country has been relatively robust since it attained independence in 1968. Its growth seems to have taken off since 1985 and is at present close to 4%, indicating strong growth at its level of economic development. The per capita GDP is also one of the best in the African Region with a per capita GDP level of approximately USD 9,000 which is equivalent to middle-income countries elsewhere.

According to the Global Competitiveness Index 2015-16 rankings, the country is placed in 46th position in the world better than all African economies including South Africa at 49th. How- ever, the country has seen a decline in ranking in 2015-16 as compared to 2014-15. The pillars where Mauritius seems to have performed well include institutions (34th) and infrastructure (37th). The areas where it is relatively vulnerable according to the Index include innovation (78th), macroeconomic environment (73rd.), technological readiness (65th), health (63rd), and higher education (52nd). Additionally, what is a matter of concern is how and what can be done to drive future growth and competitiveness of Mauritius?

Another pertinent question is how can well-being of people be captured in a more robust manner?

Four essential areas appear to be necessary to be leveraged to transition from a middle-in- come economy to a high-income one in the case of Mauritius.

First, improvement in under- lying conditions including its land, labour and capital resources. For the land resources in spite of its limited resources, it can look to harness the potential by building a state-of-the-art infrastructure and especially airport and port infrastructure as these modes of connectivity to other countries tend to have multiplier effects on the economy and can increase the speed of doing business. Apart from these basic parameters, an area which can be looked at is renewable energy. Most of the energy needs in Mauritius are still fuelled by electricity from fossil fuels. The move towards renewable energy would augur well for the environment as well as for the economy in the years to come.

The labour conditions include harnessing the cultural and religious diversity of the population and develop the potential of the people. It would also include improving the Internet penetration rate among the population which is close to 6% at present. This move may help in the development of a knowledge-based economy which has recently been initiated. Being multi-religious and multi-ethnic, the tolerance as well as diversity aspect of the population is relatively high in the country. Also, a literacy rate of 90% suggests that the population possess basic skills. In the years to come, two other focus areas should be higher education and health, where it seems to relatively lag behind other countries.

The capital development in the country appears to be robust. However, being a small economy, it is prone to shocks and macroeconomic vulnerability as reflected in its rank in the macro- economic environment pillar (73) of the Global Competitiveness Report. Also, FDI into the country appears to be robust and better than other island countries. The financial market infrastructure and resilience of the economy are observed in the past years, but there is scope for improvement with better and more robust financial systems.

The second area which appears to be important is demand conditions of the economy. The market size of the economy is small but the kinds of goods and services demanded have sophisticated over time. The import partners of the country include giants like India and China. Also the value of imports tends to be close to one third of the GDP and higher than the countries’ exports. The country is well integrated into the global markets and value chain which is both a positive and a negative as it could impact the fortunes of the island state considerably in turbulent times. However, the institutional quality and wise and proactive leadership have prevented from this kind of an adverse situation in the past.

This brings one to the third important aspect of regulation and quality of institutions as well as public policy. The institutions have been relatively robust, and the processes within the country ensure that political freedoms are guaranteed to citizens. The quality of regulations and the rule of law in the island state also appear to be on steady footing and this has lead to it being one of the biggest global investors of FDI into India. It also does well on the World Bank’s Ease of Doing Business Ranking where it is ranked 32 in 2016 down from 31 in 2015. Apart from these, the fact that Mauritius actively is a member of several international organisations shows its increasing sphere of in uence in the Indian Ocean. Strategic and economic activities often go hand in hand and Mauritius looks all set to look at both of these important activities simultaneously.

The final important point for consideration is that clusters, business sophistication and innovation form the backbone of economic development in societies. Here several industries have had a bearing on making Mauritius competitive in the past. These include sugarcane, textiles and apparels as well as industries like tourism and sh processing and, recently, IT. The level of industrial and services development that is observed has been possible with a proactive support of the government as well as the development of horizontal and vertical clusters in the economy. Innovation is one point on which the economy seems to be lagging. Innovation within goods and services as well as with processes and business models will help in the long-term development of the economy.

Overall, the economy should look at not just raising its GDP and GDP per capita but also aim to reduce productivity losses. A simple back of the envelope calculation shows that the traffic problems for half a million residents considering a 2-hour traffic jam can cause productivity losses of approximately 114 man years a day. That is the economic loss to the nation. Another thing to watch out for is disparity. It is wise to try to reduce disparity (Gini coeffcient of Income at 35.8 percent) and look to social progress as an imperative and long- term objective. That will help in putting renewable energy targets better higher educational access in broader perspective of social progress rather than in silos. In addition, the policymakers should look at social progress index with- in districts to help the country in enabling a spirit of competiveness amongst districts for a better and more prosperous Mauritius.

Over the next ten years, the economy should look to leverage its resources, raise its productivity, strengthen its institutional capacity and help innovation and innovators disrupt clusters and indus- tries with newer and improved methods of doing things. That is the easiest and surest way to move from the middle income to a high-income economy.

The article was published in a business magazine in Mauritius on March 23, 2016.