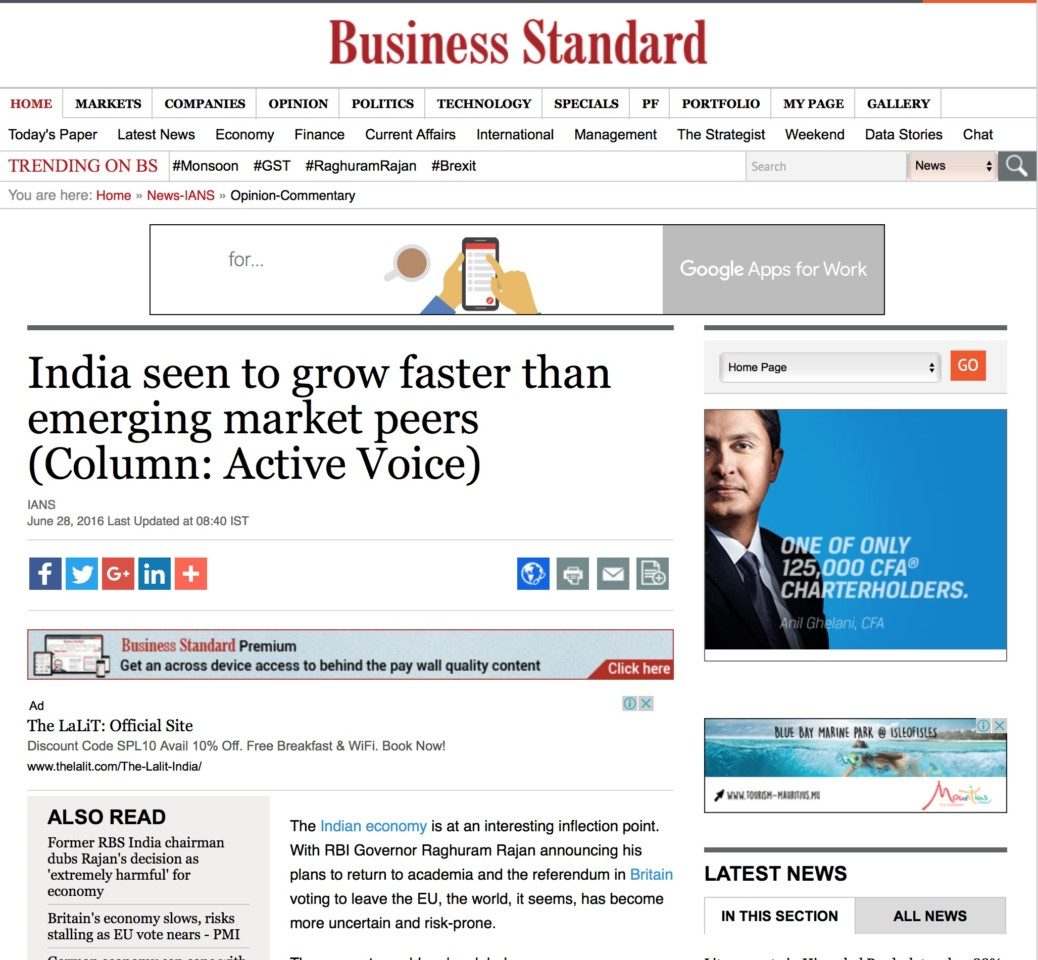 The Indian economy is at an interesting inflection point. With RBI Governor Raghuram Rajan announcing his plans to return to academia and the referendum in Britain voting to leave the EU, the world, it seems, has become more uncertain and risk-prone.

These events could make global recovery even more tepid. At present, a lot is happening in the world economy that has a bearing on the Indian economy. Amid all the uncertainty and developments, the World Bank has recently released the Global Economic Prospects (GEP). The GEP was first published around the time of India’s economic reforms in 1991 and has some interesting insights in its June 2016 report about the world economy in general and about emerging and developing economies in particular.

This brings us to the second important point, which is about commodity exporters and importers. The commodity-exporting emerging and developing economies (EMDEs), especially the energy exporters, are struggling at present and have a marginally better growth rate of 0.4 percent, up from an estimated 0.2 percent in 2015.

In contrast to this, the growth has been steady at around 5.8 percent in the commodity importing countries and is expected to accelerate shortly. This is important as China rebalances away from an investment to a consumption-driven economy in the coming future.

The third important point relates to the second issue and concerns credit in both commodity-exporting and commodity-importing economies. What has been observed is that post the global financial crisis, credit growth has been most rapid in commodity exporting EMDEs, although they have had modest credit to GDP ratios.

In contrast, the commodity importing EMDEs have had considerably higher credit to GDP ratios but are now stagnant or shrinking. Also, most EMDEs are relatively safe in terms of reaching private sector credit thresholds. The places where a threshold of private sector credit has been reached are mostly energy exporting countries. Overall credit to GDP ratios in most EMDEs are well below the threshold of 80 percent of GDP.

Finally, with respect to economic regions and individual country forecasts, the report has interesting perspectives to offer on the South Asian and Indian economy. The former has done well due to a host of factors like lower commodity prices, domestic demand momentum and steady remittance flows. Monetary policies in the individual countries have been accommodative, which has been to the benefit of countries.

The risks and weakness in some of the economies have been due to a weak external demand, a challenging business environment, fiscal pressures and poor weather conditions.

India’s growth has picked up to 7.6 percent, a 0.4 percentage point increase over 2015-16. India’s push to draw more FDI is also seen to be a positive step. Also, business sentiment is up in India with many startups commencing operations in 2015. More public investment in infrastructure is also seen as a positive which could reduce supply-side restraints.

On the flip side, credit growth to corporates remained sluggish despite five rate cuts since 2015. Also, the decline in exports for the past 15 months is seen as a negative amid a harsh global macro-economic environment.

Despite this, the report explicitly mentions South Asia and India to grow substantially in the near future. In particular, India will grow faster than its emerging market peers. If the monsoons tend to be normal India may see rising rural demand which may fuel domestic momentum. Considerable challenges on the trade front and banking with stressed assets are some of the risks facing the Indian economy at present.

The future months will be important from the viewpoint of seeing how strongly can and does the growth rebound.