A comprehensive approach to competitiveness is what we need 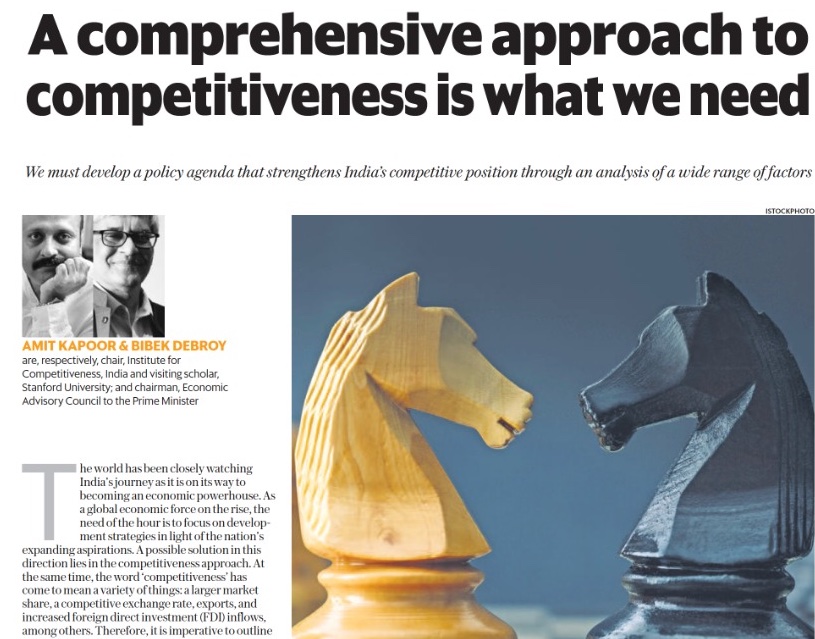 The world has been closely watching India’s journey as it is on its way to becoming an economic powerhouse. As a global economic force on the rise, the need of the hour is to focus on development strategies in light of the nation’s expanding aspirations. A possible solution in this direction lies in the competitiveness approach. At the same time, the word “competitiveness” has come to mean a variety of things: a larger market share, a competitive exchange rate, exports, and increased FDI inflows, among others. Therefore, it becomes imperative to outline what we mean by competitiveness and how this definitional clarity can help us achieve our economic goals.

Export success is one of the metrics that is increasingly linked to the concept of competitiveness. Exports and overall economic growth are correlated variables, however, the issue arises when this correlation is mistaken for causation. In other words, there is enough evidence of the fact that that exports and overall economic growth do not have a direct causal relationship. Yet, exclusive attention to export-led growth strategies prioritises exports while inadequately focussing on other aspects of the economy, like local industries. Despite being a significant driver of the economy, exports alone will not raise the general population’s welfare or standards of living unless they are given the same attention as domestic industry and other economic sectors. Competitiveness strategies emphasise the need to improve performance throughout the entire economy, not only a particular aspect like export-oriented sectors. A larger competitiveness and growth strategy should focus on export success, among other things, instead of a narrow concentration on exports. Therefore, rather than only exports, the emphasis should be holistically paid to micro and macro levels in order to boost competitiveness.

A more prominent and all-encompassing definition of competitiveness is given by Prof. Michael Porter of the Institute for Strategy and Competitiveness, who defines competitiveness in terms of productivity. By productivity, it is meant that a country’s assets and its available labour force are effectively mobilised in order to create value. In simple terms, it is the value generated by each employee. Additionally, it is not all about efficiency but uniquely creating value for the citizens in order to achieve sustained growth and prosperity. In purely economic terms, productivity can be calculated as output per input, emphasising input efficiency. At the same time, it is not simply a matter of producing more using fewer resources. Value creation is primarily about meeting the requirements of the various societal groups, whether they be consumers or producers themselves. For sustaining prosperity, the task is to produce more of what holds the social view rather than taking the derivative approach of more output and lesser input. A location-specific assessment of identifying enablers of productivity helps understand a region’s limitations and unique advantages that can enhance or impede its competitive edge. A more detailed analysis of competition would provide sophisticated policy suggestions for sustaining prosperity. To understand how to make firms more competitive, the examination can be applied to smaller geographies and even down to the firm level. Prosperity is not determined by the industries in which a place competes but instead by how well it competes using its human, financial, and natural resources.

Additionally, firms are crucial in generating wealth, and the productivity of the country is shaped by the decisions taken at the firm level. The total productivity level of the country is influenced by a number of decisions made by the firm, including the industry it chooses to compete in, its business strategy, production process efficiency, and value addition. Therefore, it is critical to empower firms by giving them the tools they need to maximise the value of their offerings, move away from dependency on low-cost labour, and adopt innovative business models.

One of the two fundamental forces influencing prosperity is labour productivity, which is measured by increases in GDP per employee. On the front of labour productivity, India has seen significant progress. The second factor influencing prosperity growth is labour mobilisation, which India continues to face as a significant obstacle. Between 2021 and 2041, the demographic dividend would provide the country with its highest working age ratio, which it needs to harness immediately. The concept of competitiveness is further strengthened as it emphasises achieving sustainable prosperity by concentrating on making the available labour force productive and enhancing the labour force through inclusion in the labour market.

The equal attention to a nation’s macroeconomic and microeconomic components further strengthens the competitiveness approach. Both elements are essential to the competitiveness and have diverse but complementary functions in the economy. While microeconomic foundations focus on elements that immediately impact particular businesses and the labour force, macroeconomic variables take into account the larger social and political institutions and fiscal and monetary measures. A combination of the two perspectives provides a thorough understanding of the economy. Taking a holistic approach does not require simultaneously moving forward on all policy fronts. The real goal is to develop a comprehensive agenda with top priorities for strengthening a nation’s unique and competitive position through a careful analysis of the Indian competitiveness diagnostics. New guiding principles, new priority policies, and a new execution mechanism should be the foundation for elevating India’s status from a lower-middle-income country to a high-income economy in the long run. Given that India has become a viable geopolitical player, its economic trajectory significantly impacts not just Indian society but also the rest of the world.

The article was published with Mint on September 1, 2022.