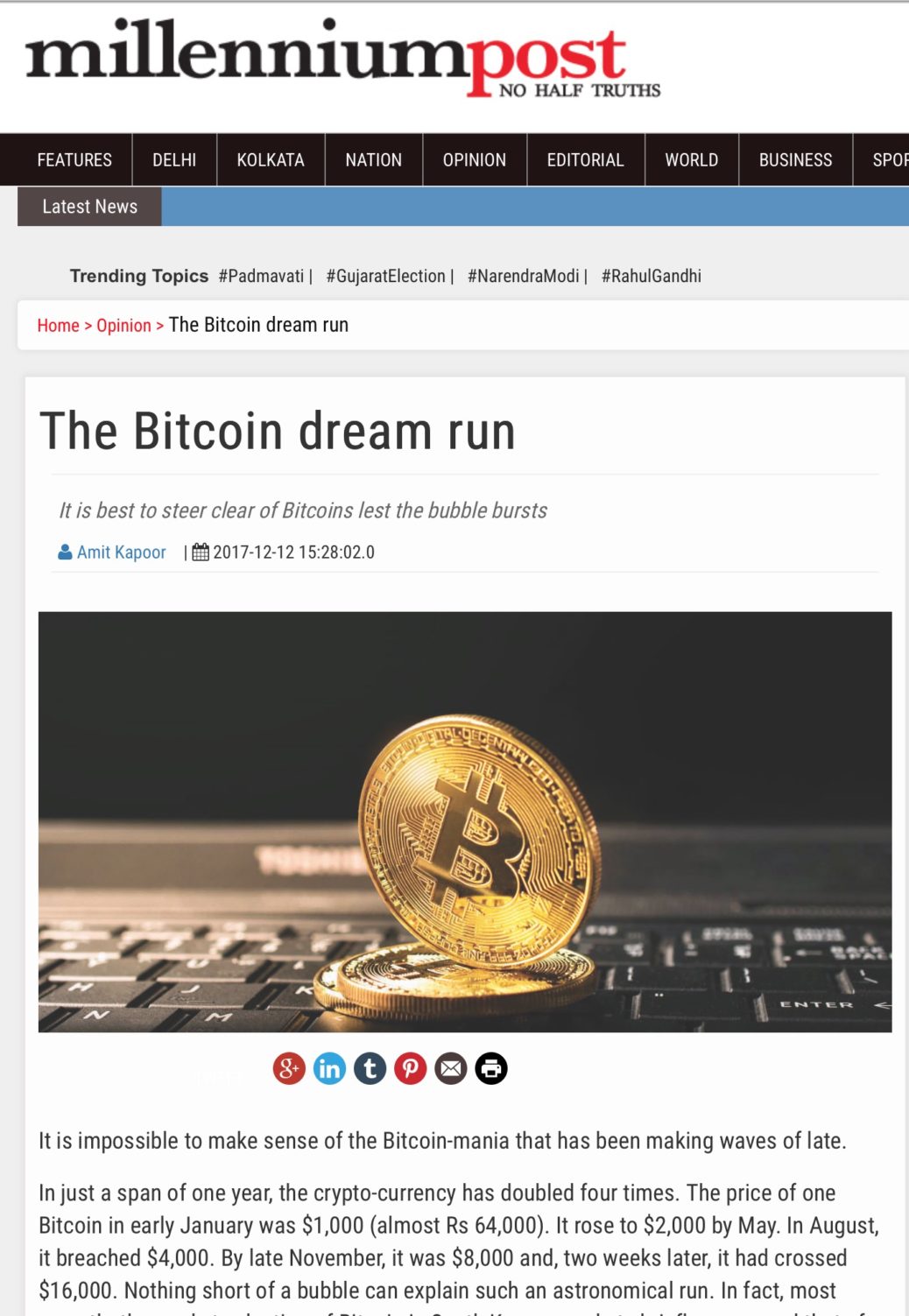 It is impossible to make sense of the Bitcoin-mania that has been making waves of late.

In just a span of one year, the crypto-currency has doubled four times. The price of one Bitcoin in early January was $1,000 (almost Rs 64,000). It rose to $2,000 by May. In August, it breached $4,000. By late November, it was $8,000 and, two weeks later, it had crossed $16,000. Nothing short of a bubble can explain such an astronomical run. In fact, most recently, the market valuation of Bitcoin in South Korean markets briefly surpassed that of JP Morgan, the world’s largest bank.

The Bitcoin bubble is quite reminiscent of the myriad bubbles in global economic history beginning with the infamous Tulipmania of the 1600s. The tulip bulb bubble occurred in Holland during early 1600s when competing for the rarest tulip bulbs became a status symbol and speculation eventually drove its price to the extremes. At its peak, the price of tulip bulbs rose as much as 1,100 percent in a month. All of this came to an abrupt end in 1637 when prices dropped to an extent that bulbs began trading at a fraction of what they once had, miring many in financial ruin. All bubbles end in a similar fashion. Only the extent differs.

Olivier Blanchard and Mark Watson, in their 1982 paper “Bubbles, Rational Expectations and Financial Markets”, explain why assets like gold, just like Bitcoins, are prone to evolve into bubbles. First, gold acts as a hedge against inflation. This, however, is not true in the case of Bitcoins. The second reason that Blanchard and Watson give for a regular gold frenzy is that people base their choices on whether or not to hold an asset based on past returns rather than market fundamentals. Therefore, investors who witness a rise in asset prices believe that they can hold on to it themselves as long as it appreciates and get out of the market before the market crashes.

The latter reason holds true in the case of Bitcoins, which are largely being driven by such speculation. Even though the Blockchain technology behind the currency is revolutionary and could very well be the Next-Big-Thing, it does not explain the astronomical 16-fold rise that it has displayed this year. It would make sense if this trend were occurring in light of a broader loss in confidence in fiat money. But this is clearly not the case in the current global economic scenario, which finally seems to be picking up.

It can also be argued that since central banks have been practicing easy monetary policy since the crisis to revive economic activity, asset prices have displayed an upward trend. Therefore, in a market where stocks, bonds and other such assets are overvalued, Bitcoin is not an exception. Its rise can be merely a hedge against oncoming interest rate hikes. But, that does not explain why the rise in gold prices has not been similar. In fact, the rise in gold prices has been lower than that in stocks.

There is an additional aspect of the Bitcoin that might explain its widespread appeal: the anonymity involved in its transactions. Bitcoin transactions can be made securely without revealing one’s identity, which makes it easy to bypass the government eye altogether. If true, the rise of Bitcoins could point to a disturbing trend of breakdown of global institutions. The Bitcoin craze can be seen in conjunction with a spate of shocking election outcomes that have been witnessed globally which reflect a larger loss in confidence in institutions that have guided growth.

However, in such a case, the longevity of the currency will be dependent on the government’s appetite to allow such transactions. It is hard to imagine governments allowing large-scale anonymous transactions that evade any taxation and enable criminal activity. China has already banned the currency. On the other hand, Japan has made it legal tender in an attempt to become the global centre of fintech. The jury is still out on what course governments across the globe will take. American economist and chess Grandmasster Kenneth Rogoff put it best recently when he said: “The long history of currency tells us that what the private sector innovates, the state eventually regulates and appropriates.”

Either when the speculative run ends or governments decide to regulate, the Bitcoin dream run is bound to come to an end. It is best to steer clear of the dreaded eventuality.

The article was published with Business Standard and Millennium Post on December 12, 2017.