The Curious Case of Investment in Education 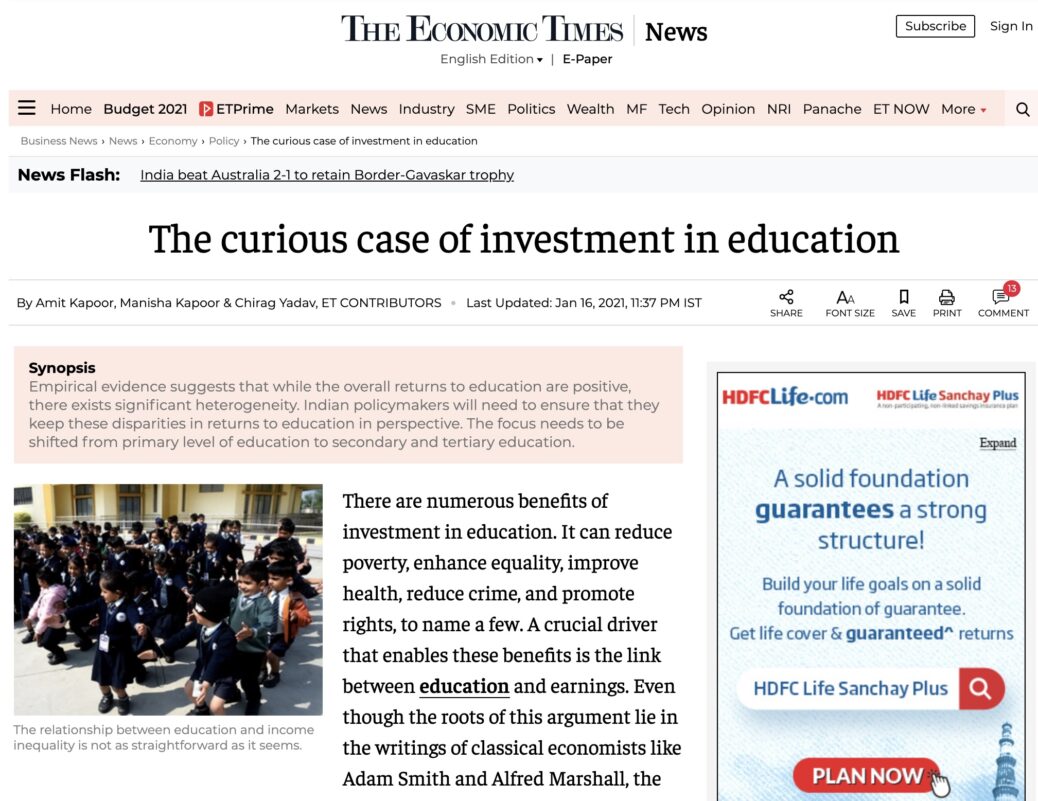 The Curious Case of Investment in Education

There are numerous benefits of investment in education. It can reduce poverty, enhance equality, improve health, reduce crime, and promote rights, to name a few. A crucial driver that enables these benefits is the link between education and earnings. Even though the roots of this argument lie in the writings of classical economists like Adam Smith and Alfred Marshall, the idea was formally conceptualised in the form of the human capital theory relatively recently when Theodore Schultz and Gary Becker popularised it in the 1960s. Since then, numerous estimations of the economic benefits of investment in education have been published.

Now, the fact that more education leads to higher earnings seems trite. But to make a precise case, studies estimate the rate of returns to schooling, which equates the value of lifetime earnings for an average individual with the cost of their education. If the return rate is positive and higher than alternative forms of investment, it makes economic sense to invest in education. When these calculations are made at the individual levels, it is termed as the private rate of return to education. But when social costs such as money spent on schools and teachers are added to it, we obtain the social rate of return.

The latest estimates show that the global average of the private rate of return to an additional year of schooling is about 8.8 percent.[1] These returns are significantly higher than most long-term asset investments, which makes spending on human capital a good investment. It has been documented in several studies that the returns are higher in developing countries compared to developed ones.[2] Further, developing countries exhibit higher returns to primary education while the developed economies experience higher returns to tertiary education.

It is crucial for countries to understand these trends as it informs policymaking. The returns to each level of education provide information to policymakers about public investment priorities. Similarly, the education-wage differentials signal the skills that the market values and provide an idea about the necessary interventions. The necessity to identify appropriate avenues of investment in education have become even more pertinent as students globally deal with the effects of the pandemic on access to schooling.

The Institute for Competitiveness has undertaken a study to estimate the returns to education in India using the Periodic Labour Force Survey (PLFS) data published by the National Sample Survey Office (NSSO). It provides some interesting insights, especially when compared to the literature on developing economies. Most importantly, it shows the segments of population that require more policy focus on education investment to ensure equitable development over the long run.

The Returns to Education in India

However, averages are rarely useful to draw meaningful insights in a world of heterogeneity. The returns to education also depend on several heterogenous factors, which has a notable bearing on policy choices. For instance, if the returns to education are higher for individuals at the top of the income distribution, maintaining a status quo in additional education investments would lead to an increase in inequality. So, it is necessary to dissect the data to unravel the heterogeneity.

The Case for Adolescent Investment

Conventionally, the returns to education were diminishing. The empirical evidence until the 1990s showed that the returns were highest at the primary education level and progressively lower at secondary and tertiary levels. In fact, the argument that basic education can reduce poverty was based on the notion of diminishing returns as gains were highest at the lowest level. But recent evidence, which is our finding for India as well, suggests that this may have changed, which has crucial implications for the poverty-reducing capacity of each level of education.

The shift in returns away from primary education might have been led by both supply and demand side factors. In India’s case, it achieved universal primary enrolment in 2015, and so, the supply of primary graduates has increased substantially. On the demand side, with a change in the skill composition of goods demanded and increased mechanisation, the demand for people with low skills keeps falling. A combination of these factors drives the returns to primary education downwards.

Thus, it is necessary that India expands its policy focus on education to adolescents who are pursuing post-primary education and ensures a reduction in school dropouts at those levels. Moreover, since the returns to secondary schooling are not as high, the key will be to incentivise enrolment until higher secondary.

While disaggregating returns to education by level suggest where education investments need to be focussed, it does not address who requires more investment. Do all individuals face the same rate of return to education? If not, who is likely to benefit more, and why? What are the policy implications of that? To answer these questions, it is necessary to delve into further heterogeneities in education among different groups of individuals.

The Role of Education in Fighting Inequality

The primary reason to understand the impact of education at the microeconomic level is due to its relationship with inequality. There has been a long-standing notion of a “race between education and technology”, which was conceptualised by Jan Tinbergen in 1974. The idea relates to the skill-biased impact of technological progress, on one hand, with the equalising impact of education, on the other.

History has shown that with the introduction of any new technology – whether it be innovations in electricity and transport or advancements in information and technology – the pace of increase in demand for skilled workers increases inequality. In such times, education plays a major equalising role by imparting people with relevant skills. The race between the steady accumulation of human capital in the face of rapid technological advancement determines the growth trajectories of nations.

India has been a classic case where this race has played out in interesting ways. Traditionally, economies transition from an agrarian focus to being led by industries, and are finally, driven by services. India’s structural transformation skipped the manufacturing phase to become a service-led economy. This curious anomaly materialised when India’s initial investments in tertiary education created a strong pool of engineers who fulfilled the demand for such skilled workers from the technologically advanced Western world. Education had preceded the race with technology in this case, which resulted in higher growth for the Indian economy.

But the relationship between education and inequality plays out in different ways based on the policy choices and their intended beneficiaries. For instance, even if education manages to maintain pace with technological progress with a steady supply of skilled workers, if certain sections of the population are unable to gain access to education, it can exacerbate inequality in the society. Keeping this in perspective, we have studied the disparities in returns to education based on individual characteristics.

The relationship between education and income inequality is not as straightforward as it seems. By providing growth opportunities to all the individuals, education impacts their earning capacity. In order to understand the impact of education-earning relationship on inequality, one needs to examine two things. First, whether the existing patterns of returns are concentrated or dispersed. Second, if they are dispersed, which cohorts benefits the most from educational investments. If the returns to education are higher for those at the top of the income distribution, investments in education will widen inequality. In such a case compensatory intervention will be needed to equalise the chances of those at the bottom of the income distribution.

We use a quantile regression method to estimate the returns to education across earning distribution to understand the patterns of returns. Our results show increasing returns by quartiles highlighting that education investments are more profitable for those at the top of the distribution. The returns for the bottom 25 percent are around 5.5 percent, which increase to 6.4 percent for the 50th quantile and rises further up to 8.5 percent for the 75th quantile.

The results demonstrate that patterns in India are similar to what is predominantly observed in higher income countries. And it is only by aiming public policy interventions specifically towards the deprived groups, India can expect education to play a role in reducing income inequality.

There is a vast literature investigating the role of gender in defining labour market outcomes. For India, such insights are more important given the recent trends of female labour force participation. Four out of five women are not working in India. Only Yemen, Iraq, Jordan, Syria, Algeria, Iran, and the West Bank and Gaza have a lower female labour force participation rate than India. It is not the low figures but the falling trend that is more worrisome. It is thus important to investigate why more women are not seeking work.

Our results show that there is significant disparity in the returns to education between males and females. Using the overall earnings, both corrected and uncorrected measures show that the returns are higher for females. The returns are nearly two percentage points higher for females, after controlling for personal characteristics as well as selectivity bias. One year of education adds 8.9 percent to female monthly wages while it only adds 6.6 percent to male’s monthly wages. One possible explanation for this can be that education not only enhances female skill and productivity but also reduces the wage gap between males and females that is attributed to discrimination. These results highlight the need for investments in education females since that will not only yield great private benefits but also results in high social returns for the economy.

In a nutshell, empirical evidence suggests that while the overall returns to education are positive, there exists significant heterogeneity. Indian policymakers will need to ensure that they keep these disparities in returns to education in perspective. The focus needs to be shifted from primary level of education to secondary and tertiary education. There are incentives to invest in adolescent education since the returns are highest for tertiary education. In addition to focusing on higher levels of schooling, focused interventions are required for lower income quantiles and the female population so that education plays an equalising role.

The article was published with Economic Times on January 16, 2021.