The Global Economy in the New Decade 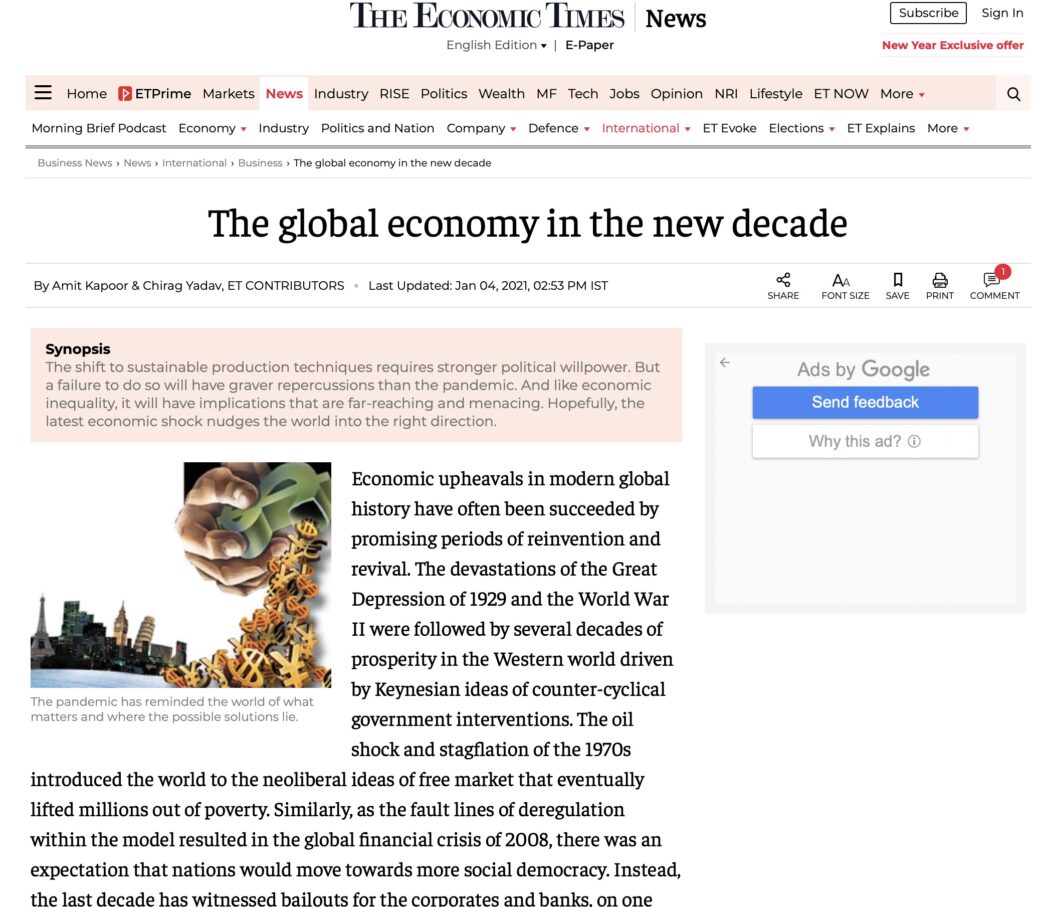 The Global Economy in the New Decade

Economic upheavals in modern global history have often been succeeded by promising periods of reinvention and revival. The devastations of the Great Depression of 1929 and the World War II were followed by several decades of prosperity in the Western world driven by Keynesian ideas of counter-cyclical government interventions. The oil shock and stagflation of the 1970s introduced the world to the neoliberal ideas of free market that eventually lifted millions out of poverty. Similarly, as the fault lines of deregulation within the model resulted in the global financial crisis of 2008, there was an expectation that nations would move towards more social democracy. Instead, the last decade has witnessed bailouts for the corporates and banks, on one hand, and austerity for the people, on the other. As we enter a new decade, the question remains whether the economic shock of the COVID-19 pandemic will herald a renewed economic thinking that has been long overdue.

There can be little disagreement that the global economy, and economics in general, are in dire need of fresh ideas. In the latter half of the previous decade (2016-19), global real wage growth has fluctuated between 1.6 percent and 2.2 percent as per International Labour Organisation (ILO) statistics. When China is excluded from the sample, the range falls between 0.9 and 1.6 percent. During this period, average global GDP growth fluctuated between 2.3 percent and 3.3 percent. This implies that the labour share in global income has been declining. In fact, the real wages have been barely keeping pace with the contribution of the labour to the overall output. The ILO estimates show that if both real wages and labour productivity are assumed at 100 two decades ago in 1999, the latter would be at 122 in 2019 while the former would merely be at 114.

The implications of these trends range from economic to political. When the rise in real wages falls behind output growth and productivity numbers, it implies that capital owners are commanding a larger share of the pie. Consequently, the sections in society that can afford to invest in capital assets can accumulate income and wealth at a faster pace. As the focus on development remains on aggregate gross domestic product (GDP) numbers, these underlying trends of growing inequality remain unnoticed until they surface in different and dangerous ways. The previous decade has been replete with such outcomes on the political front. The general feeling of discontentment with the prevailing economic order led to the emergence of populist leaders like Donald Trump in the Global North to Jair Bolsonaro in the Global South. The growing sentiments of othering and polarisation over the last decade are outcomes of the lack of economic betterment among the masses.

The COVID-19 pandemic has further worsened the situation. The economic shock caused due to the lockdowns is estimated to leave over 100 million people in developing countries on the verge of extreme poverty. The social discontentment from such an outcome will be exponentially worse than anything that the world has experienced in recent times. Thus, the manner in which the global economy handles the aftermath of the pandemic will determine the course of the new decade.

The pandemic has also reminded the world of what matters and where the possible solutions lie. First, it has underscored the importance of the competent governance and responsible public investment in ensuring equitable outcomes. The spectre of the virus has pulled focus on crucial developmental matters such as health and education, which are often brushed under the carpet. If there is one learning that the global economy can draw from the pandemic, it is the importance of maintaining a policy focus on social investment and outcomes. When real wages are not rising at a satisfactory pace, public investments on social goods can partly compensate for the inadequacy.

Second, the abrupt pause in global flows of goods and people due to the pandemic has allowed nations to reconsider their movement towards hyper-globalisation. As nations have begun to focus inwards into their domestic economies, it might prove beneficial for low-skill workers in the advanced economies and create new avenues for employment in the emerging economies. However, since globalisation had a complex relationship with inequality, especially in the developing world, the larger implications of any movement away from it are bound to be equally complex.

Finally, the pandemic has proven that the world can unite behind a global threat and work together for solutions to combat them. A looming threat that could become the defining challenge of the new decade is climate change. While it is relatively easy to galvanise into action against a virus that had visible fatal consequences, the shift to sustainable production techniques requires stronger political willpower. But a failure to do so will have graver repercussions than the pandemic. And like economic inequality, it will have implications that are far-reaching and menacing.

The need for a fresh developmental outlook that is more equitable and sustainable has become more crucial than ever. Hopefully, the latest economic shock nudges the world into the right direction.

The article was published with Economic Times on January 4, 2021.