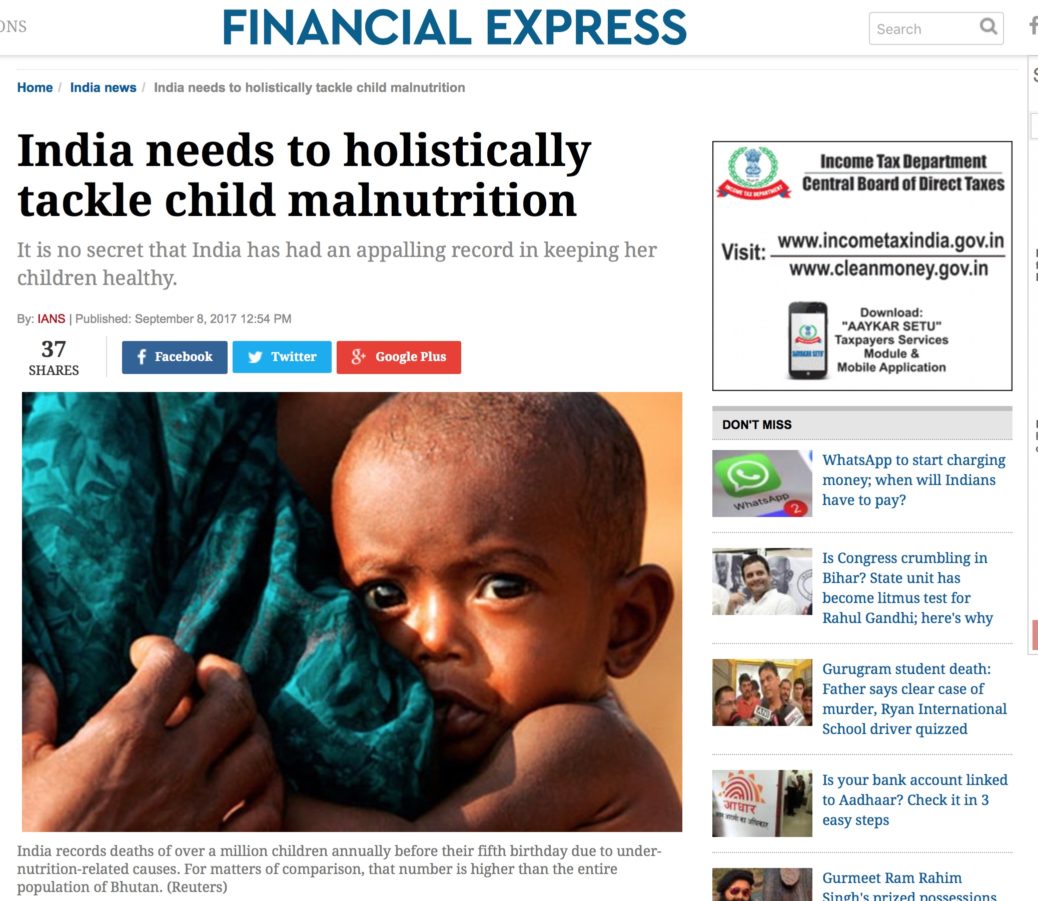 It is no secret that India has had an appalling record in keeping her children healthy.

It is no secret that India has had an appalling record in keeping her children healthy. The country records deaths of over a million children annually before their fifth birthday due to under-nutrition-related causes. For matters of comparison, that number is higher than the entire population of Bhutan. Among the ones lucky enough to survive, more than half end up anaemic and almost 40 per cent are either stunted or underweight. It is shocking that despite losing precious segments of its population each year, discussions around its causes in the mainstream media are virtually non-existent.

Amartya Sen and Jean Dreze tested how frequently issues of health found their way into the editorial pages of India’s leading dailies. It turned out that in more than 300 articles between January and June 2000, there was not even a single health-related one. In a second test during the last six months of 2012, they found health coverage in merely one per cent of the total editorial pages. Considering these trends, it has been a refreshing change to witness a topic like nutrition coming into vogue in Indian policy corridors. Most recently, the NITI Aayog has come up with a 10-point action plan to tackle the menace of undernourishment in line with Prime Minister Narendra Modi’s vision of “Kuposhan Mukt Bharat” — in consonance with his ideas of Swachh Bharat and Swasth Bharat.

The document calls for state-customised action plans to address local nutritional needs and has set a few targets for measurable outcomes that are to be achieved over the next five years. However, there are a few issues in adopting such an approach. The most glaring one is that the government has seen some progress through its schemes and programmes but has failed to make a substantial impact. The Integrated Child Development Services (ICDS) for children aged 0-6 by the Women and Child Development Ministry and the Infant and Young Child feeding practices by the Ministry of Health and Family Welfare are a case in point.

According to the National Family Health Survey estimates, only an estimated 170,000 children receive the treatment they need under these schemes out of a total of 930,000 children who have severe acute malnutrition (SAM) with medical complications. An outreach of 18 percent for a problem so acute is hardly satisfactory. Another problem with asking the states to develop local agendas to combat a problem like malnutrition is the widespread limitations in general understanding of the concept. This has been evident in the recent debate around the use of packaged ready-to-use therapeutic food or energy/nutrient-dense supplements in government programmes and projects. The opponents of the practice colour the use of these therapeutic foods as an international corporate agenda driven by profit motives. They usually argue for the use of freshly-cooked meals made locally and to do away with the idea of providing standardised therapeutic food.

Such arguments lead to a misunderstanding and misrepresentation of the problem of malnutrition. SAM is a medical condition that cannot be treated with mere provision of food. Ready-to-use therapeutic foods are ln effect medicines that provide the holistic and standardised set of nutrients and caloric density that are indispensable in dealing with malnutrition. Moreover, freshly-cooked food at the ground level comes with its own set of problems that have cropped up from time to time in government-initiated programmes. Leaving the responsibility of cooking meals in the hands of individuals who are not experts leaves the possibility of contamination of food, which can only worsen the problem. Therefore, in case the fight against malnutrition is taken up on a segmented basis, such knowledge gaps are bound to creep in and undermine the process. India needs a defined national agenda that can achieve the short-term goals set by the NITI Aayog. A measured mix of the right incentives and market-based solutions can be of substantial help. The case of Peru, which witnessed one of the most successful achievements in the world in reducing malnourishment, offers a viable solution.

Peruvians had suffered from a similar problem of child malnourishment as India currently does. About one in three children under five years of age were suffering from chronic malnourishment in 2000. Over the next few years, the country spent an estimated $200 million annually on nutrition programmes, but hardly saw any improvement. From 2007 onwards, the Peruvian government undertook a nationwide effort in coordination with local governments, health professionals and NGOs to focus on a specific set of goals and targeted policy initiatives to improve child nourishment. The first thousand days of a child’s life were put in focus. A World Bank-backed conditional cash transfer programme was also implemented where the mother was incentivised to conduct regular health and growth check-ups for children in the first three years in return for a monthly cash transfer of $30.

As a result of the programme, chronic malnutrition halved from 47.9 percent in 2009 to 25.2 percent in 2015. Stunting among children also dropped from 29 percent to 14 percent between 2007 and 2014. In the Indian context, such an approach can address both the issues outlined above. Low outreach of government programmes is eliminated with a monetary incentive to participate and the problem of knowledge gap is overcome by regular interaction of the parents with the community frontline workers who can administer the therapeutic food if needed.

Keeping such an approach in mind, a federal guideline for the states with clearly defined safety and standardisation parameters is required on an immediate basis for easy adoption and impactful intervention on ground. The urgency for swift action cannot be overstated in the case of malnutrition as it determines the productivity and cognitive abilities for generations to come. The body and the brain develop fastest in the womb and in the first two years of a child’s life. This time period needs to be the absolute focus of Indian policymakers.