Here’s how to boost India’s competitiveness 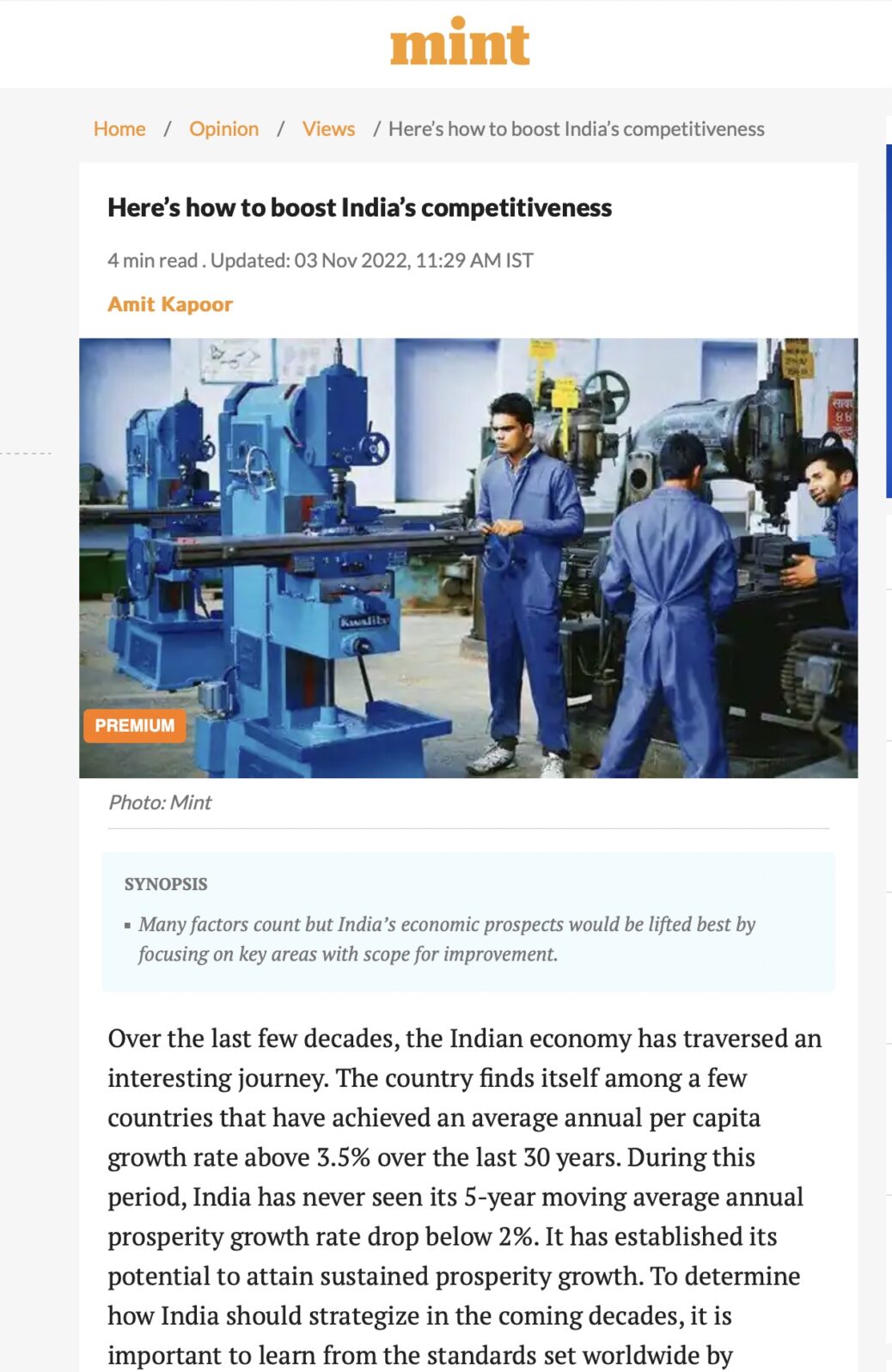 Over the last few decades, the Indian economy has traversed an interesting journey. The country finds itself among a few countries that have achieved an average annual per capita growth rate above 3.5% over the last 30 years. During this period, India has never seen its 5-year moving average annual prosperity growth rate drop below 2%. It has established its potential to attain sustained prosperity growth. To decide how India should strategize in the coming decades, it is important to learn from the standards set worldwide by different peers in various areas and work towards attaining the best using our unique potential. What will it take to rise to the next level and propel forth in terms of elevating the overall competitiveness performance? If we are to encapsulate the comprehensive framework of Michael Porter’s Competitiveness in a line, it is the ability of a region to provide a context that enables firms to operate productively, and individuals to partake in the value generated through their productivity. The context here implies an environment encompassing both the microeconomic foundation – factors affecting labour, and firms, directly – as well as the macroeconomic foundation – the overall fiscal and monetary set-up, and institutional factors. Competitiveness translates into a process of continual upgradation and improvement in the overall national environment, and not just in any one arena. Mapping India’s competitiveness shows that while India has attained considerable gains, there is immense scope to improve further.

Looking at the world’s best competitiveness performers is not to draw comparisons, but to learn, and then persevere on the basis of our specific strengths and opportunities. At present, India is classified as a lower middle-income country with average prosperity levels at $2,000 ($7,150 at purchasing power parity).  India has registered sustained prosperity growth with its prosperity level at 18.5% of the global average, compared to less than 6.5% of the global average in the early 1990s. It is at a stage of economic development where fundamental dimensions of competitiveness like workforce skills, basic infrastructure, an open functioning market, predictable legal and institutional conditions, and macroeconomic stability serve as critical levers of more balanced development. While there is scope for improvement across different areas, it is the key fundamentals where India can work with greater emphasis.

One of the key fundamentals that call for attention is the skill and education area. Leveraging the pool of human resources available has been an extensively discussed theme, but its relevance cannot be overstated. The education system in India has made notable progress over the years. The overall Gross Enrolment Rate (GER) in elementary education saw an eleven per cent increase, from 81.6 in 2001 to 93.03 in 2018. Similarly, secondary enrolment has also jumped from 45% in 2000 to 75% in 2020. Going forward, there needs to be a greater focus on the adequacy of education to meet the needs of employment. Switzerland, Singapore, Denmark, and Sweden are among the countries that have successfully managed to develop their human capital in a way that the transition from education and skilling to employment is relatively smoother, especially on the back of a strong tertiary education system. The Ministry of Education is implementing a scheme for vocationalizing school education under the umbrella of “Samagra Shiksha’, a scheme that aims at integrating vocational education with general academic education in Secondary/Senior Secondary schools to enhance employability among students. India is striving to improve on this front through a slew of similar initiatives. By adequately harnessing the link between education and employment, India can enhance its competitiveness through greater labour productivity.

Between 2008-09 and 2016-17, average labour productivity growth accelerated to 4.5 per cent from 3.9 per cent during 1993-94 to 2007-08. According to ILO estimates, GDP per hour worked (GDP constant 2017 international $ at PPP) for 2021 is the highest for Luxembourg, standing at $128.1. Labour productivity is closely associated with economic growth, competitiveness, and living standards in an economy. In the coming years, India must work towards elevating its labour productivity levels further.

Yet another key area to boost India’s competitiveness is an improvement in the business environment. A strong business ecosystem eases functioning, at all stages of business development, and fosters growth opportunities for enterprises. There has been significant progress in creating an efficient business environment, with over 33,000 compliances simplified, rationalized, digitized or decriminalized by central ministries and states/union territories combined. There is still much ground to cover to improve the overall environment for businesses and individuals. Countries like Singapore have been consistently successful in providing a business-friendly environment for their entrepreneurs. While India should derive motivation to elevate its overall competitiveness level by looking on to its counterparts, the country must shape strategies and policy priorities as per its own strengths and opportunities.

Competitiveness depends on a wide range of mutually reinforcing factors. A more nuanced analysis of India’s competitiveness performance calls for each area to be assessed deeply. For the overall national context to offer an atmosphere conducive to growth for all, India must continue on the path of competitiveness enhancement with a coherent strategy and more vigour.

The article was published with Mint on November 3, 2022.