Role of Equality in Pandemics 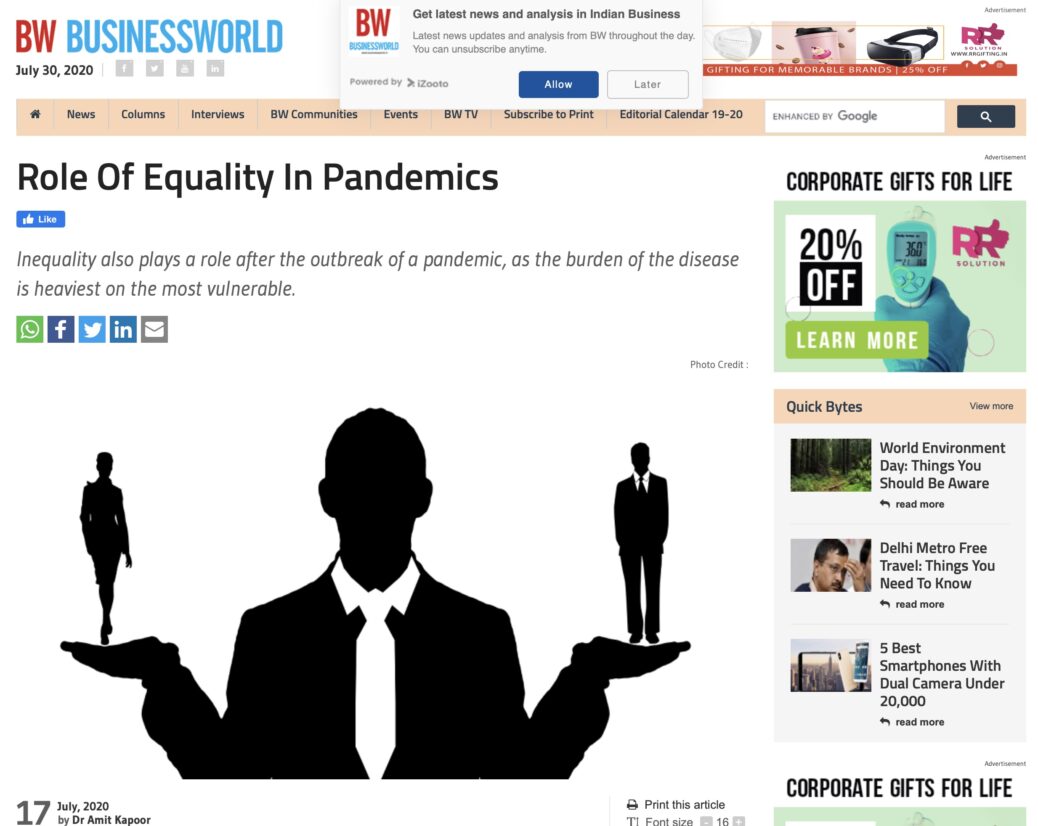 Role of Equality in Pandemics

Like many other natural disasters and global epidemics, the Covid-19 pandemic also does not discriminate. It has even been called as a great equalizer. However, a closer inspection reveals that the effects of such crises are most devastating on the most vulnerable sections of society.

Inequality has always been closely linked with pandemics. Inequality is not only a tool that creates differential impact of a pandemic across society and is further exacerbated by it, but it could also be the reason behind an outbreak. A school of thought argues that pandemics occur during times of growth inequality. The theory goes that sustained population growth leads to rise in population density, which increases the basic reproduction number of all diseases. Simultaneously, overpopulation increases supply of labour, thus pushing down the wages and causing poverty.

Undernourishment is high among the poor, which reduces their immunity response against pathogens. Labour migration to cities is also high among the poor, which makes cities a breeding ground for diseases and migrants the carrier of those diseases. Meanwhile, the rich get richer on account of cheap labour. They are more globally integrated through travel andluxurious purchases from far-off regions, which also creates a route for germs to move around the world.

The link between the level of global connectedness, levels of inequality in society and pandemics throughout history has been tested successfully by historian Peter Turchin. The Antonine plague of 165 BCE, the plague of Justinian in the 6th century and the Black Plague in the 14th century all emerged during a time of flourishing international trade and rising poverty.

While the hypothesis needs to be further tested, the current crisis has also emerged during a time marked by peak inequality and hyper-globalisation. Thus, these could be among the factors driving the emergence of Covid-19 pandemic.

Inequality also plays a role after the outbreak of a pandemic, as the burden of the disease is heaviest on the most vulnerable. The poor have the least access to quality healthcare systems,and live in densely packed unhygienic areas that facilitate transmission. The policy response to the current pandemic stands out in comparison to previous pandemics, in that most countries implemented a lockdown to contain the spread. Here too, the vulnerable suffer as they have low capacities to comply with such measures, further exacerbating inequities. Since their wages only cover basic necessities, they can hardly survive on their savings during lockdown and are therefore more likely to not comply. Even those with salaried jobs are more likely to lose their jobs owing to their low levels of education and skilling. The challenges are worse for those in developing countries.

The inequality also exists in access to vaccine when they come out as market forces dictate the pattern of distribution, as was seen during the swine flu epidemic of 2009. Thesedistributional inequalities not only exist between the rich and the poor but also between rich nations and poor nations.

Even after the vaccine has reached everyone, the disease leaves the world much more unequal than before (Furceri et al. 2020) and the poor suffer even greater poverty through generations after. The younger generation is also forced to drop out of schools and join the workforce to make ends meet. The effects of these social transformations go well beyond health and economic crises. They lead to unrest and discontentment among masses, which results in political upheavals and rise of populist leaders.

Since the role of inequality in pandemics stretch far wider than perceived, the policy response should also stretch beyond the focus on economic revival. Of course, economic revival would benefit the poor too, but only if the revival is equitable in design- preferably leaning towards helping the most vulnerable. This is why cash transfers to the people can be more effective than stimulus to businesses. They would revive demand and provide safety net to the poor, and eventually prevent further rise of inequalities and social discontentment.

The future of the global community is tied to the well-being of the person at the end of the line. Thus, immediate response should be to secure livelihoods of the most deprived. There may be undesirable outcomes on the way but our actions today set the course for the world tomorrow.

The article was published with Business World on July 17, 2020.