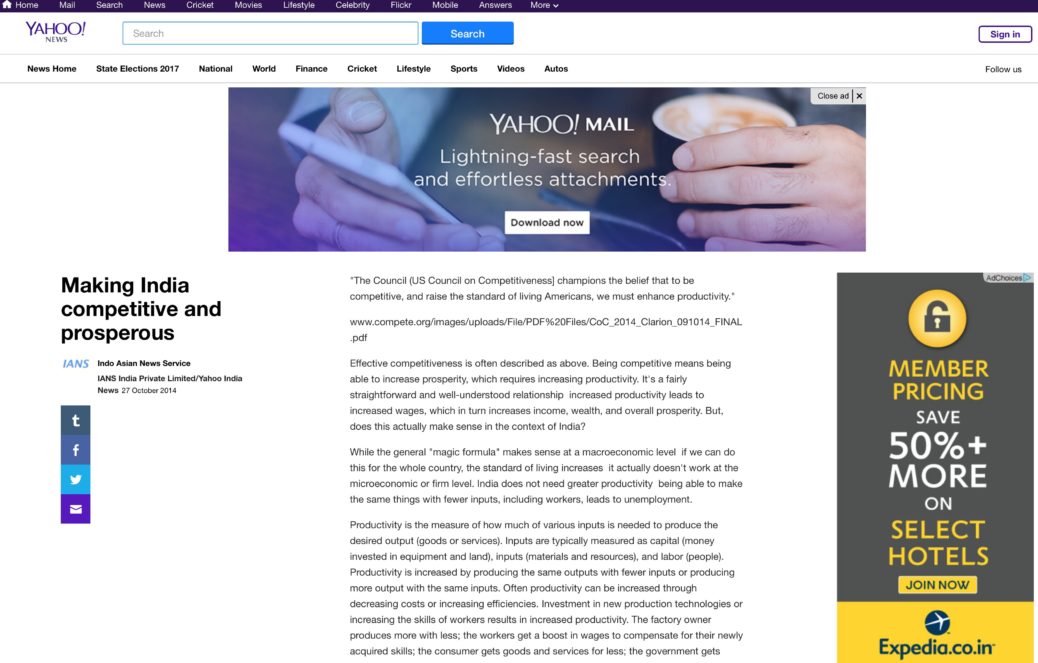 “The Council [U.S. Council on Competitiveness] champions the belief that to be competitive, and raise the standard of living Americans, we must enhance productivity.”

Effective competitiveness is often described as above.  Being competitive means being able to increase prosperity, which requires increasing productivity.  It’s a fairly straightforward and well-understood relationship – increased productivity leads to increased wages, which in turn increases income, wealth, and overall prosperity.  But, does this actually make sense in the context of India?

While the general “magic formula” makes sense at a macroeconomic level – if we can do this for the whole country, the standard of living increases – it actually doesn’t work at the microeconomic or firm level.  India does not need greater productivity – being able to make the same things with fewer inputs, including workers, leads to unemployment.

Productivity is the measure of how much of various inputs is needed to produce the desired output (goods or services).  Inputs are typically measured as capital (money invested in equipment and land), inputs (materials and resources), and labor (people). Productivity is increased by producing the same outputs with fewer inputs or producing more output with the same inputs.  Often productivity can be increased through decreasing costs or increasing efficiencies.  Investment in new production technologies or increasing the skills of workers results in increased productivity.  The factory owner produces more with less; the workers get a boost in wages to compensate for their newly acquired skills; the consumer gets goods and services for less; the government gets greater tax revenue – everyone wins and shares in the benefits.

This is the model vigorously and relentlessly pursued in the U.S. as reflected in the quote from the U.S. Council on Competitiveness.  But, this we cannot “make in India”.   Increasing productivity at the firm level would result in fewer people working in manufacturing.  Let me explain with the story of the bricklayer.

I recently was at a newly opened mall in India.  While the stores were open and the mall was completed, the outside work was still in progress.  This included a large brick courtyard that was being laid at the front entrance to the mall.  The work on this courtyard consisted of 13 people:  1 skilled mason, 2 helpers, and 10 women.  The mason was laying the bricks, assuring the correct pattern, and making sure everything was level and correct.  The helpers were at either end of the line of women – one helper was with the mason, handing him bricks.  The second helper was at the other end pulling bricks off the pile, sorting them to throw out any that weren’t correct, and handing them to the women.  The women were carrying 8-10 bricks each on their heads from the pile to the mason.  Thirteen people, all working to lay a brick courtyard.  A scene repeated across India a million times every day.

Now, let’s make the process more productive.  Purchase one handcart (a capital investment in new technology) and you can eliminate 11 of those 13 people.  You still need the mason to lay the patio, and he needs one helper who can now use the handcart to move 100 bricks at once and put them within easy reach of the mason.  One productivity-enhancing investment and 11 people, and their families, lose their jobs and income and go hungry that day.

India is that courtyard.  Increasing productivity in the traditional way cannot be the answer.  India does not need fewer people working in manufacturing or any other industry – it needs more.  And, given the large and growing potential workforce, labor costs are exceedingly low.  The mason had made a perfectly reasonable and correct decision – hiring 10 women was more cost-effective.  He only had to pay them when they worked.  He could easily expand or contract the size of his workforce as needed for each job.  He doesn’t always need to move 100 bricks – sometimes just 50.  He can hire 5 women for the day instead of 10, but the handcart can become an unnecessary cost when he does smaller jobs.

This piece is co-authored with Kevin Stolarick who is the Director of India Institute for Competitiveness in Toronto, Canada and tweets @stolarick)