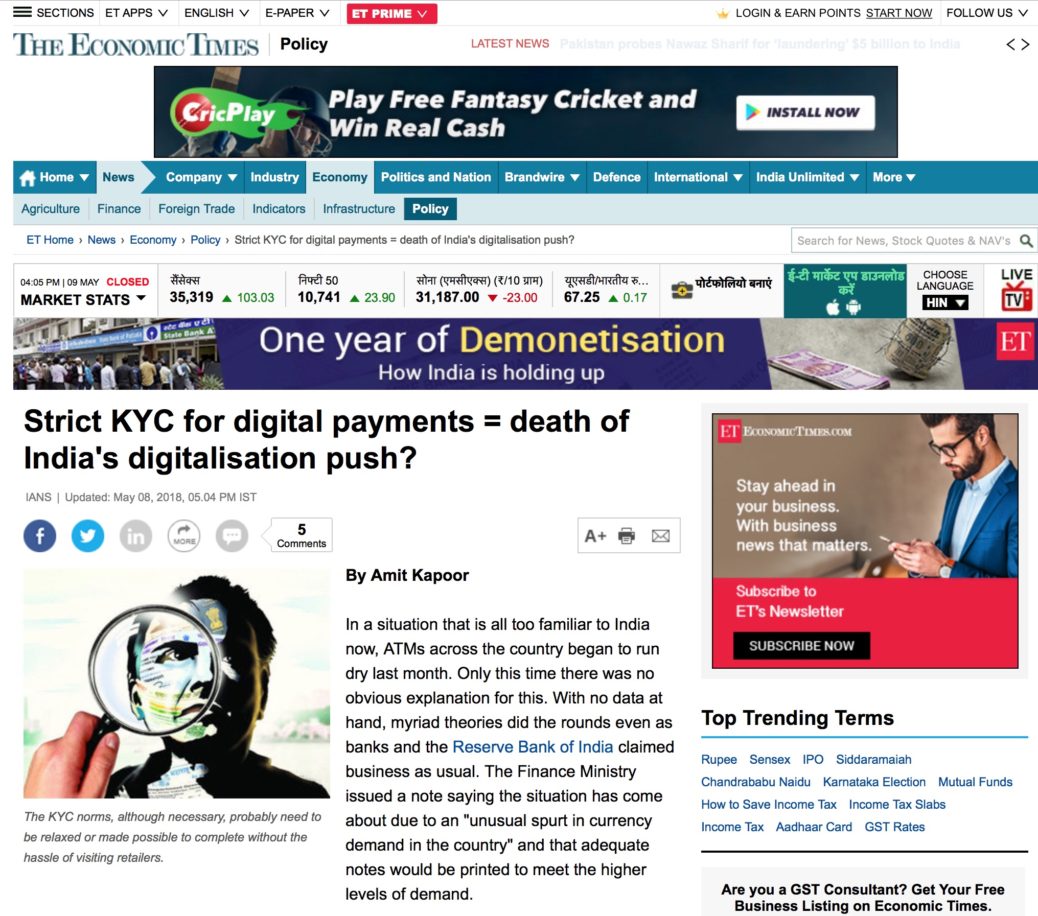 In a situation that is all too familiar to Indians now, ATMs across the country began to run dry across various parts of the country last month. Only this time there was no obvious explanation for it. With no data at hand, myriad theories did rounds even as banks and the Reserve Bank of India claimed business as usual. The finance ministry issued a note saying the situation has come about due to an “unusual spurt in currency demand in the country” and that adequate notes would be printed to meet the higher levels of demand.

The “unusual spurt” could have been be due to the cash hoarding in poll-bound states like Karnataka, Telangana, Madhya Pradesh and Rajasthan. Incidentally, cash shortage was more acute in these areas. But, Indian states are in a perpetual election cycle so that might have been an enabling factor but not the root cause of the problem.

An argument was also made that following the spate of fraud and corruption scandals that have rocked Indian banks over the last few months, it is possible that depositors have lost faith in the system and have chosen to withdraw their money from it. After all, trust is the very basis of the existence of these institutions. But, considering the fact that the world economies survived the 2008 financial meltdown, the confidence in the banking system can be said to be far more resilient than a couple of malpractice issues.

There are two aspects, however, that have specifically taken place over the last few months and could explain the cash crunch. First, is the sudden dip in digital transactions while the amount of currency in the economy has still not reached optimal levels. The absolute level of currency in circulation recently went above the level it was before the demonetisation exercise was undertaken in November 2016. But, this provides a misleading picture. In relative terms, the currency in circulation has been around 12 percent of GDP since the last available estimates from 2002. This dropped to around 6.3 percent when the demonetisation exercise took place in November 2016 and has been recovering since. As per the latest RBI data from April, this ratio has only reached 11 percent implying that the cash in the economy is still below the pre-demonetisation peak.

Now, if the currency levels have not reached normalcy since demonetisation, why has the cash shortage become apparent only now? It so happens that digital payments had been compensating for the cash shortfall. According to RBI data for electronic payments, which is only available until February, payment over platforms like mobile wallets and UPI have significantly picked up since November 2016.

However, RBI imposed strict know-your-customer (KYC) norms on all digital platforms with a last date of February 28. The official estimates are yet to come in, but most players in the payment business have reported a drop of about 40-45 percent in transactions through digital wallets in the first week of March. Customers have found it convenient to shift to cash rather than complete KYC formalities. So, a cash shortfall along with a drop in digital transactions could have easily resulted in a demand-supply mismatch.

Second, the government or the RBI have not been clear on the matter, but it is becoming increasingly clear the printing of the Rs. 2000 note is being either reduced or stop. An increase in the circulation of the Rs. 200 denomination notes are being undertaken to compensate for it. The idea is to increase the amount of small denomination notes within the economy so that cash facilitates only the transactional demand of the public and the prevalence of black money is curbed. However, for lower denomination notes ATMs have to be replenished more frequently and this could have given the impression of cash scarcity.

Any impression to the public that cash was in short supply due to either of the two reasons could have triggered hoarding due to panic and further accentuated the shortfall. Therefore, prima facie it appears so that the situation is more of a supply-side problem and will cease to be an issue once pre-demonetisation levels are achieved. A more accurate picture will appear once more data becomes available.

So, the cash situation is not as big a problem in the long-run. A more concerning issue that emerges out of this whole affair is the waning interest in digital payment platforms due to stricter regulations. If this is the beginning of a trend, it will signal a quiet death of India’s digitalisation push. It will be interesting to see how the government and the RBI respond to the challenge. Ensuring behavioural change through policy can be complex since it is easier to stay on the path of least resistance. For India, that implies reverting back to being a cash-dependent economy. The solution lies in making the adoption of digital payments easier. The KYC norms, although necessary, probably need to be relaxed or made possible to complete without the hassle of visiting retailers. Also, probably the low incidence of high denomination notes can help to an extent by increasing the transaction costs of being dependent on cash and, thus, encouraging a move towards digitalisation.

The article was published with Economic Times, Moneylife, Millennium Post on May 8, 2018.