Keeping India on track: Why the current wave of rail reforms is actually “historical”? 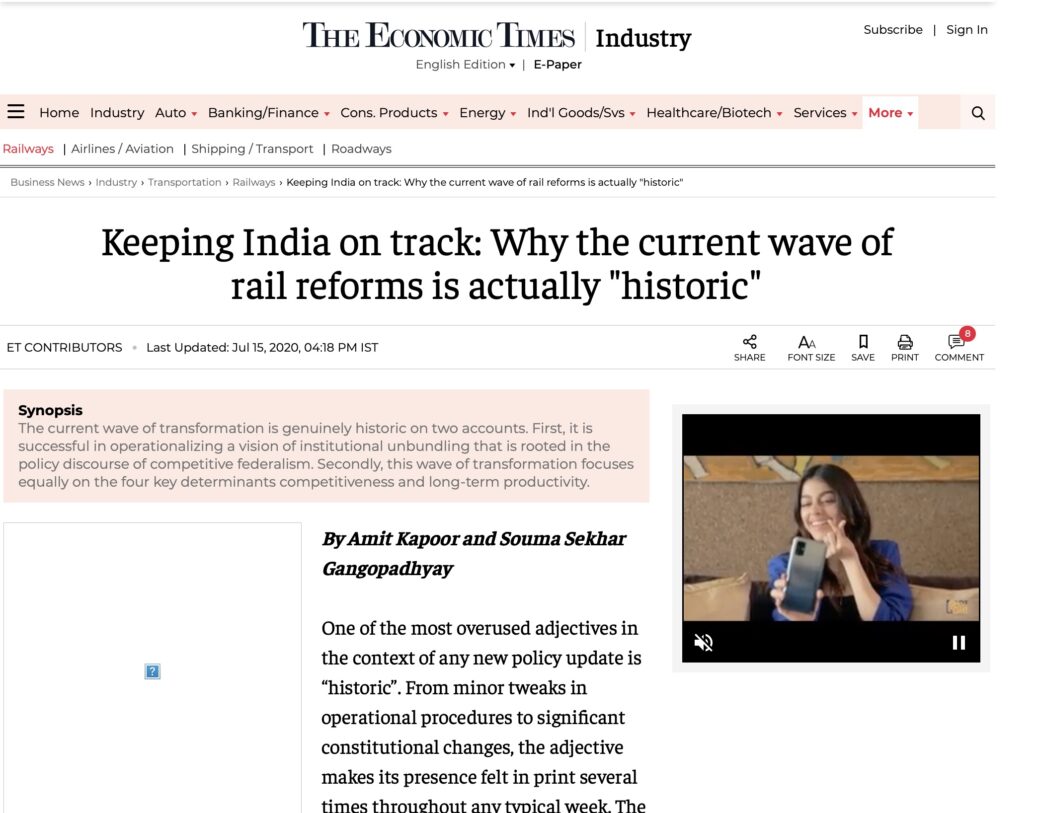 Keeping India on track: Why the current wave of rail reforms is actually “historical”?

One of the most overused adjectives in the context of any new policy update is “historical”. From minor tweaks in operational procedures to significant constitutional changes, the adjective makes its presence felt in print several times throughout any typical week. The last week, however, was anything but ordinary for the Indian Railways. An institution which is often perceived to be slow in matters of institutional transformation has featured consistently in print owing to major transformative initiatives. The first half of the week witnessed the Indian Railways making news for inviting Request for Qualifications (RFQs) for private companies to operate 151 passenger trains on 109 Origin-Destination (OD) pairs of routes. The second half of the week highlighted the mission mode adoption of the Green Railways by 2030 initiative focusing on complete electrification and the incorporation of new and renewable energy resources within the railways to power its extensive infrastructure. It is expected to give a significant boost to the renewable energy sector and at the indigenous production of green energy infrastructure at the same time, a domain which is heavily dominated by Chinese imports.

There have been committees in the past, such as the Wanchoo Committee (1968), Kunzru Committee (1978), and Sarin Committee (1981-85) that have made recommendations to improve the operational performance of the Indian Railways. However, it was the Nanjudappa Committee (1993) where the proposal to withdraw cross-subsidization (freight to passenger) within the railway was categorically noted. The new discourse of economic liberalization in the 1990s, focusing on the corporatization of public management and financial sustainability of public services also began to percolate into the Indian Railways. This discursive shift in policy has continued in every committee that succeeded Nanjudappa from Tandon Committee (1994) to Alhuwalia Committee (2014) reaching its zenith in the Bibek Debroy Committee (2015) recommendations.

The historical aspect of the current reforms stems from the new paradigm of institutional unbundling that guides the recommendations of the Debroy Committee and re-imagines the relationship between the Indian Railways and the Government of India. The committee unbundles the Indian Railways into two separate institutions, one with distinctively commercial outlook aiming to make capital gains and another that meets the “social obligations” of the government. The approach is refreshing as the distinction is not just made between the different activities of the Indian Railways, but also in its institutional imagination. For instance, keeping in tune with the idea of competitive federalism – the new vision of the railways imagines the State Governments as partners in meeting the social obligations which were till date being borne by the Central Government alone. It makes complete sense because some instruments of meeting the “social obligation” – such as the sub-urban railways or local trains – have a significant local positive spill-over effect which may at times disproportionately benefit the State more than the Centre. Also, a substantial portion of the revenue of the Central Government is nothing but the consolidated share of income received from the States. Therefore, if the Central Government subsidizes the operation of suburban railways from a unified revenue stream, it may lead to more complex questions of fairness in the long-run as the economic benefits from such services are mostly restricted to a single State.

Apart from the institutional unbundling of the Indian Railways, the other significant “historical” element of the current set of reforms stems from an equal emphasis of the government on four fundamental determinants of competitiveness. They are: factor conditions (promoting industry-academia linkages to develop human and technical skills in railway infrastructure development), demand conditions (such as the mission mode implementation of the Green Railways by 2030 agenda and the creation of new Dedicated Freight Corridors), firm strategy, structure, and rivalry (creation of an independent regulatory authority to promote positive competition within railways), and development of related and supporting industries (such as converging Make in India initiatives to create new and indigenous supplier networks that are internationally competitive). All these four elements, part of Michael Porter’s diamond framework, are empirically proven determinants of long-term productivity and national competitiveness. Therefore, these reforms implement actionable policy propositions on the ground that make the Indian Railways competitive by enhancing its long-term productivity and facilitating an ecosystem to drive its future ambitions.

Therefore, the current wave of institutional transformation in the Indian Railways is genuinely historical on two accounts. First, it is successful in operationalizing a vision of institutional unbundling that is rooted in the policy discourse of competitive federalism. Secondly, and most importantly, this wave of transformation focuses equally on the four key determinants competitiveness and long-term productivity. As the Indian economy prepares to re-gain its foot-hold in a post-pandemic world, the Indian railways chug along with its potential INR 30,000 crores private investment opportunity and a set of “historical” structural changes to do what it does best – keep India on track.

The article was published with Economic Times on July 15, 2020