Transcription of the Talk by Dr. Bibek Debroy 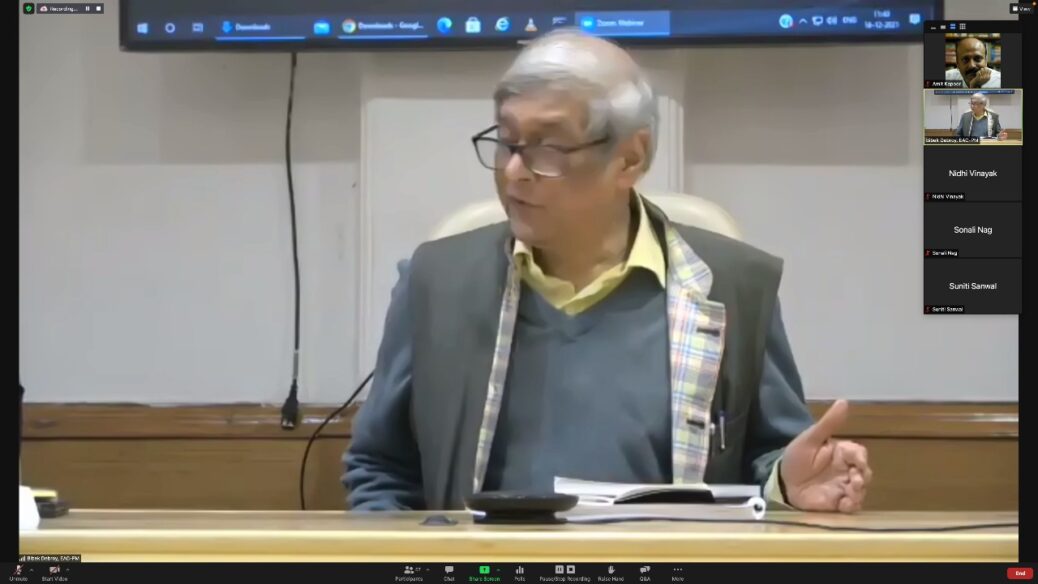 Report that come to give some policy suggestions so that they lead to actual improvements. This is the first report. It being the first report, its laudable, as firstly,  it has been brought about quickly and secondly, the report focusses as something we knew is important to all of us which is the issue of foundational literacy. Foundational Literacy is defined at the age group of 3 to 8 so it is sort of pre school and if we go deeper into the definition then grade 2 or grade 3. Not entirely but partly the ranking of states as shown in the report uses data from ASER and ASER as we all are aware is a rural based survey and hence is subjective data.

I would come back to the various variables that have been used to construct the index. The data can be objective data and subjective. The moment ones tends to slice the data one has to be a little bit careful. One reason for that is that is, this attempt to gauge the Foundational learning is based on questions that are asked on literacy and numeracy. Quite often the responses depend and are contingent on the kind of questions that are asked, the Language that they are asked in. One of the things that one would have looked in this report is – what kind of questions did ASER ask and in what language that they ask in (because it has data from ASER). India, before covid was thinking of participating in PISA again. Post covid don’t know what has happened. Pre covid in 2011 there was a pilot in 2 states and results of that pilot were that the responses were extremely conditional on the language in which the questions were asked.  More so for literacy and less so for numeracy. I would suggest that in future if such kind of report is done we should know the language in which the questions were asked.

I also have an issue with certain value jetimens that are implicit. Eg. When we take a related issue of health , since health also figures in the report and remember when we are basing something like this it is cross-sections in one point in time. Suddenly a figure which says stunting has worsened over time and in necessarily regard this as a bad thing as I should not have stunting, should not have wasting but think of the counter factual. We know that the IMR in India and there would be infants who would have otherwise died presumable from deprived sections now they are not dying, they are surviving and almost all the infants who re surviving would have dies otherwise would be susceptible to more stunting and wasting. I cannot control for this but I can lead to acknowledge it. And the same thing occurs for numeracy and literacy. We know that GER has been going up – increasing – probably from sections who would have otherwise not have had access to school education. Those deprived sections – as we do not only learn from anganwadi or school we learn from environment also. At least one should acknowledge that there is control issue and not be so categorical about it.

Child labor as mentioned in the report has statistical and methodological problem. Statistically the data that is cited is 42.7 million as per census 2011. The census figure is 38 million. Please check that. This is appoint that UNICEF made as census was inducted in April/May/June when the children who are in std 5 were not counted, so when we adjust it the figure would not be 42.7 million but 29 billion. This is a minor statistical problem but the more serious problem is why are we saying child labor is bad. All of us have watched home alone at some point in time and no one abuses that as child labor. In the US all the time school kids deliver newspapers, we say that child labor we should not bark up the wrong tree. Child labor is bad if children work in hazardous processes or occupation and leads to children dropping out of school. India is a signatory to ILO convention let us not unnecessarily flag the issue of child labor. There is child labor because children are dropping out of school and children are being deprived of education. I become even more skeptical as there is an assertion in report which says covid is driving child labor up and where is it based upon, it is driving from Africa. Where is the child labor in India, some of it is on the farm within the family, Its in garments , fireworks, the roadside stalls, hospitality all of those have suffered as a result of covid and lockdown and all of them employment problems in general Covid would have not done anything. If someone tells me that covid has driven child labor up then it is impossible to believe as it flies against all the evidence .It is in Africa and this an Indian report.

Mid day meal – The mid day meal is a health objective and is linked to foundational Literacy. There is also an assertion that covid has affected foundational learning. It has, but it has affected across the board and this is not something specific to only to these age groups. So one should make this point.

Sections of digital divide– one needs to be little bit careful one of the assertions is schools having computers and internet but one is necessarily going to access learning methods through school internet or computers. Or one can do it thru mobile phones / smart phones. So ,the issue is not per say schools or computers or internet connection as we know that is an easy source through DISE. But how diksha or school computers don’t match.

Index – It is based on 5 pillars – some from DISE. There are no issues on the pillars of Education infrastructure/ Access to education / basic heath. Learning outcomes – apart from what has been mentioned above about ASER that its rural. State of West Bengal – In the days that I know of the left govt, the West Bengal government has concentrated on rural schools . If we look at track record of students who are topped the board exams all are rural. Kolkata is done with it. If I am basing it on learning outcomes which is based on ASER which is rural and probably imparting a bias against states that are more urbanized. Don’t know what is the answer to that. But one should at least recognize that there is a bias that is creeping in. It is not surprising that something like West Bengal topping the list –Firstly, of something that is mentioned above and on governance and expenditure. This is not expenditure this is expenditure on what? West Bengal government has spent extensively on school education by jacking up salaries so my variable would be at the top of my list. Has it led to any Improvement in outcomes I doubt it very much. So these are some thoughts that were shared by Dr. Bibek Debroy. Some of them are little sense of statistics or data and some of these are of value jetimens and some of these are what policy one end up with.