India’s Competitiveness: Where do we stand? 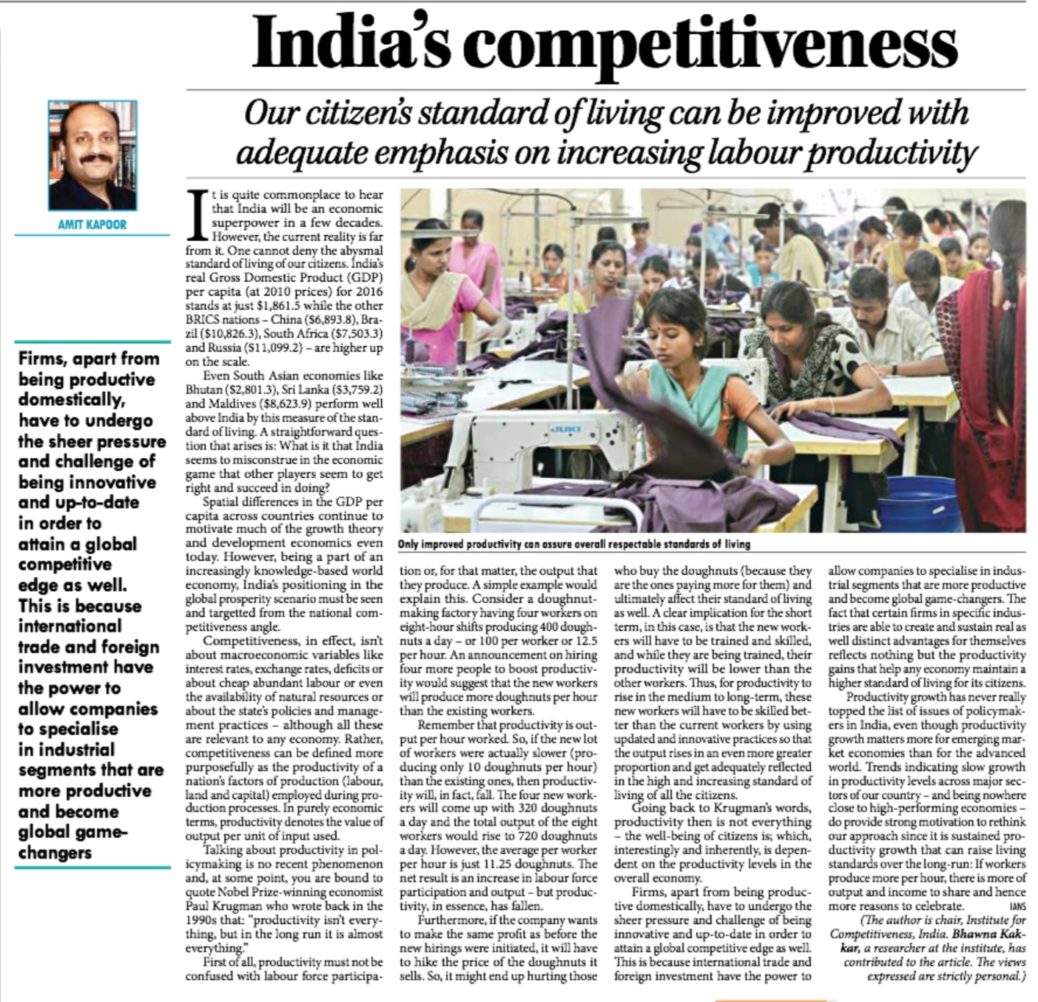 India’s Competitiveness: Where do we stand?

Even South Asian economies like Bhutan ($2,801.3), Sri Lanka ($3,759.2) and Maldives ($8,623.9) perform well above India by this measure of standard of living. A straightforward question that arises is: What is it that India seems to misconstrue in the economic game that other players seem to get right and succeed in doing?

Spatial differences in GDP per capita across countries continue to motivate much of growth theory and development economics even today. However, being part of an increasingly knowledge-based world economy, India’s positioning in the global prosperity scenario must be seen and targeted from the national competitiveness angle.

Competitiveness, in effect, isn’t about macro-economic variables like interest rates, exchange rates, deficits or about cheap abundant labour or availability of natural resources or about state policies and management practices — although all these are relevant to any economy. Rather, competitiveness can be defined more purposefully as the productivity of a nation’s factors of production (labour, land and capital) employed during production processes. In purely economic terms, productivity denotes the value of output per unit of input used.

Talking about productivity in policymaking is no recent phenomenon and, at some point, you are bound to quote Nobel Prize-winning economist Paul Krugman who wrote back in the 1990s that “productivity isn’t everything, but in the long run it is almost everything”.

First of all, productivity must not be confused with labour force participation or, for that matter, the output that they produce. A simple example would explain this. Consider a donut-making factory having four workers on eight-hour shifts producing 400 donuts a day — or 100 per worker or 12.5 per hour.

An announcement on hiring four more people to boost productivity would suggest that the new workers will produce more donuts per hour than the existing workers.

Remember that productivity is output per hour worked. So, if the new lot of workers were actually slower (producing only 10 donuts per hour) than the existing ones, then productivity will in fact fall. The four new workers will come up with 320 donuts a day and the total output of the eight workers would rise to 720 donuts a day. However, the average per worker per hour is just 11.25 donuts. The net result is an increase in labour force participation and output — but productivity, in essence, has fallen.

Furthermore, if the company wants to make the same profit as before the new hirings, it will have to hike the price of the donuts it sells. So it might end up hurting those who buy the donuts (because they are the ones paying more for them) and ultimately affect their standard of living as well. A clear implication for the short term, in this case, is that the new workers will have to be trained and skilled, and while they are being trained their productivity will be lower than the other workers. Thus, for productivity to rise in the medium to long term, these new workers will have to be skilled better than the current workers by using updated and innovative practices so that output rises in an even more greater proportion and be reflected in the high and increasing standard of living of all the citizens.

Going back to Krugman’s words, productivity then is not everything — the well-being of citizens is; which, interestingly and inherently, is dependent on productivity levels in the overall economy.

Firms, apart from being productive domestically, have to undergo the sheer pressure and challenge of being innovative and up to date in order to attain a global competitive edge as well. This is because international trade and foreign investment have the power to allow companies to specialise in industrial segments that are more productive and become global game-changers. The fact that certain firms in specific industries are able to create and sustain real as well distinct advantages for themselves reflects nothing but the productivity gains that help any economy maintain a higher standard of living for its citizens.

Productivity growth has never really topped the list of issues of policymakers in India, even though productivity growth matters more for emerging market economies than for the advanced world. Trends indicating slow growth in productivity levels across major sectors of our country — and being nowhere close to high-performing economies — do provide strong motivation to rethink our approach since it is sustained productivity growth that can raise living standards over the long run: If workers produce more per hour, there is more of output and income to share and hence more reasons to celebrate.

The article was published with Millennium Post, Business Standard and Money Life on February 28, 2018.