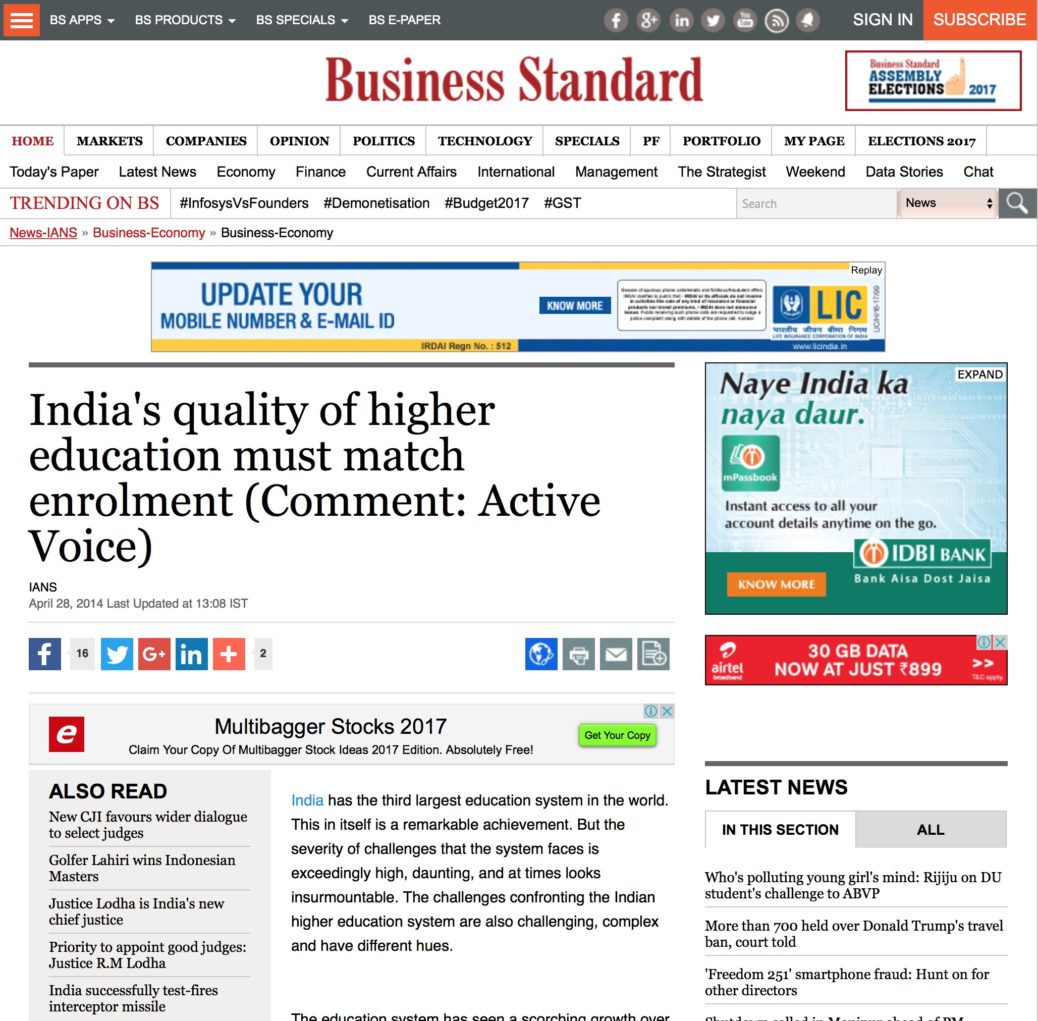 India has the third largest education system in the world. This in itself is a remarkable achievement though the severity of challenges that the system faces are exceedingly high, daunting and times look insurmountable. The challenges confronting the Indian higher education system are challenging, complex and has different hues.

The current state of affairs looks dismal if we dig deeper and try to understand the system better. The most alarming figure is the average enrollment across universities, colleges and autonomous institutions that stand at 550 students. The distribution is highly skewed and is characterized by small number of extremely large institutions and very large number of very small institutions. To give a perspective Nalanda University at its peak had 10,000 who had come to study from across Asia. The average number of enrollments within the system reflect the scale problem our educational institutions face today and we have not yet touched upon the idea of dismal global impact of our institutions pertaining to research and enrollments from across the globe.

The issue of enrollments takes the center stage as India looks at improving the Gross Enrollment Ratio (GER) to 30% by 2020 and this would require an additional capacity of about 10 million to be created over the next five years.

India without a doubt has to pursue the goal of improving the share of population that is pursuing higher education. Though increasing GER has to be more than just building universities or institutions as this would be insufficient and untenable solution given the short timeframe to create an impact. It would be have to be about access and availability. The whole perspective on access and availability could be defined by financial capacity, opportunity costs being rendered, language of teaching etc.

Increasing GER for India is a massive undertaking though using and leveraging existing infrastructure is a possible solution wherein the utilization of educational assets is dramatically improved. This would as well have to be done keeping in mind the idea of excellence in teaching and research institutions. Excellence here need not be just focused on publications and research though rather looking at curriculum and the knowledge being imparted to the students.

In India we have clear evidence to the fact that quality is not there and this is reflected upon in educational institutions wherein most of the graduates do not end up finding a job. This clearly is a reflection of the state of affairs wherein the corporates have either shunned the graduates or do not attach enough premium to the youth educated through our institutions. The debate in the Indian context can as well move into the direction of job seekers versus job creators though this would open a Pandora’s box on the efficacy of our educations system, the ethos we live by and values we impart in our Universities and Colleges. To put this bluntly we could probably say that quality is simply not there and urgent attention is required to set our house in order.

One simple aspect on quality is further reflected through the process of accreditation of our educational institutions and the seriousness with which it is seen in the country. Improving quality is clearly about accreditations and external reviews that could come from UGC or external institutions. This though is not reflected in the conversations I have had with Vice Chancellors, Directors or Deans who end up making statements that accreditation and ranking processes are biased, not reflective of reality, digress the Institutes from path of academic excellence etc. I would immediately retort on this that in case an Institute was achieving academic excellence then it would be ranked at the global level and receiving accreditation wouldn’t be an issue.

It is important for us as a country to recognize and appreciate that Gross Enrollment Ratio and quality education is always related to increase in nations wealth, GDP and prosperity though India seems to be missing the idea and we clearly need to fix this urgently if we wish to continue on the path to achieve the status of being an economic superpower.

This piece is based on interaction with Kevin Stolarick basis his piece on higher education in India. Kevin is Director of India Institute for Competitiveness in Toronto, Canada and tweets @stolarick)