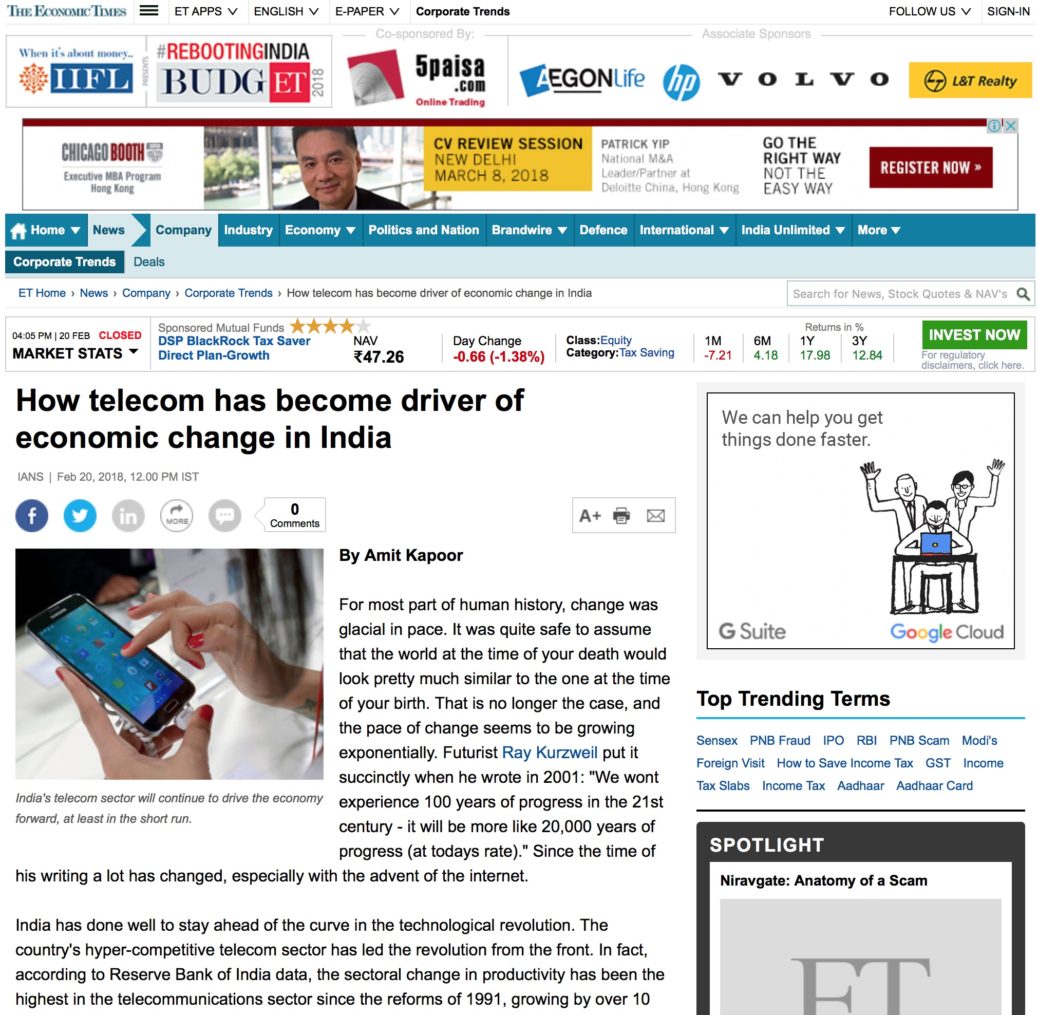 For most part of human history, change was glacial in pace. It was quite safe to assume that the world at the time of your death would look pretty much similar to the one at the time of your birth. That is no longer the case, and the pace of change seems to be growing exponentially. Futurist Ray Kurzweil put it succinctly when he wrote in 2001: “We wont experience 100 years of progress in the 21st century – it will be more like 20,000 years of progress (at todays rate).” Since the time of his writing a lot has changed, especially with the advent of the internet.

India has done well to stay ahead of the curve in the technological revolution. The country’s hyper-competitive telecom sector has led the revolution from the front. In fact, according to Reserve Bank of India data, the sectoral change in productivity has been the highest in the telecommunications sector since the reforms of 1991, growing by over 10 percent. On the other hand, no other sector has had a productivity growth of above five percent during the same period. It is no wonder that it has also been one of the fastest-growing sectors of the Indian economy, growing at over seven percent in the last decade itself.

Such an unprecedented pace of growth has been brought about the precise levels of change that Kurzweil was so enthusiastic about. Today’s smartphones have the power of computers that took an entire room in the 1990s, and the telecom sector has had to keep up with provision of commensurate internet speeds and services. Meanwhile, India has managed to provide the cheapest telephony services around the world, which has hit rock bottom after the entry of Reliance Jio. This has ensured access to those even at the bottom of the pyramid.

Even though consumers have come to be accustomed to fast-paced changes within the telecom sector, the entry of Jio altered the face of the industry like never before by changing the very basis of competition. Data became the focal point of competition for an industry that derived over 75 percent of its revenue from voice. It was quite obvious that there would be immediate economic effects due to it. Now that we’re nearing a year of Jio’s paid operations, during which time it has even become profitable, we saw it fit to quantify its socio-economic impact on the country. Three broad takeaways need to be highlighted.

First, the most evident effect has been the rise in affordability of calling and data services. Voice services have become practically costless while data prices have dropped from an average of Rs 152 per GB to lower than Rs 10 per GB. Such a drastic reduction in data prices has not only brought the internet within the reach of larger proportion of the Indian population but has also allowed newer segments of society to use and experience it for the first time. Since the monthly saving of an average internet user came out to be Rs 142 per month (taking a conservative estimate that the consumer is still using 1 GB of data each month) and there are about 350 million mobile internet users in the country (Telecom Regulatory Authority of India data), the yearly financial savings for the entire country comes out to be Rs 60,000 crore.

To put things in perspective, this amount is more than four times the entire GDP of Bhutan.Therefore, mere savings by the consumer on data has been at astonishing proportions.

Now, this data has been used for services that have brought to life a thriving app economy within the country. So, the second level of impact has been in the redressal of a variety of consumer needs — ranging from education, health and entertainment to banking. For instance, students in remote areas can now access online courseware and small businesses can access newer markets. Information asymmetry has been considerably reduced.

Third, a rise in internet penetration has distinct positive effects on economic growth of a country. These effects arise not merely from the creation of an internet economy, but also due to the synergy effects it generates. Information becomes more accessible and communication a lot easier. Businesses find it easier to operate and access consumers. Labour working in cities has to make less frequent trips home and becomes more productive as a result. Education and health services become available in inaccessible locations. Multiple avenues open up for knowledge and skill enhancement.

An econometric analysis for the Indian economy showed that the 15 percent increase in internet penetration due to Jio and the spill-over effects it creates will raise the per capita levels of the country’s GDP by 5.85 percent, provided all else remains constant.

Thus, India’s telecom sector will continue to drive the economy forward, at least in the short run, and hopefully catapult India into 20,000 years of progress within this century, as Kurzweil postulated. The best approach for the state would be to ensure the environment of unfettered competition within the industry. Maybe other sectors of the economy ought to take a leaf out of the telecom growth story. The Indian banking sector comes to mind. However, that is a topic for another day.

The article was published with Economic Times, Business Standard, The News Now (TNN) on February 20, 2018.