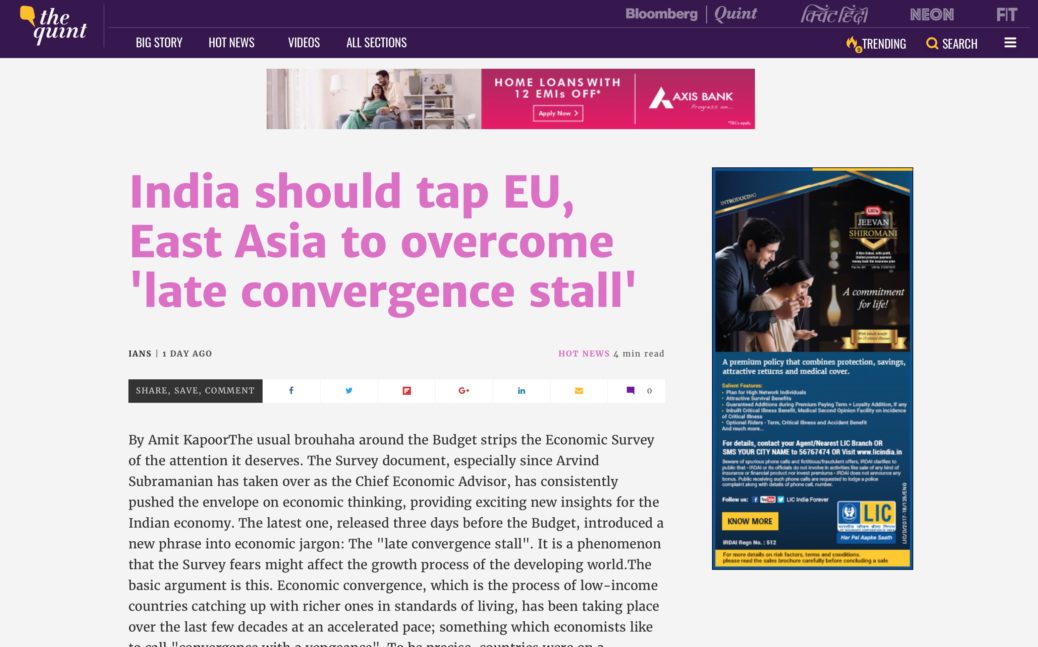 The usual brouhaha around the Budget strips the Economic Survey of the attention it deserves. The Survey document, especially since Arvind Subramanian has taken over as the Chief Economic Advisor, has consistently pushed the envelope on economic thinking, providing exciting new insights for the Indian economy. The latest one, released three days before the Budget, introduced a new phrase into economic jargon: The “late convergence stall”. It is a phenomenon that the Survey fears might affect the growth process of the developing world. The basic argument is this: Economic convergence, which is the process of low-income countries catching up with richer ones in standards of living, has been taking place over the last few decades at an accelerated pace; something which economists like to call “convergence with a vengeance”. To be precise, countries were on a divergence path before 1997, a period of convergence from 1998 till the financial crisis in 2008 and an era of accelerated convergence post-crisis.

However, with changing global economic scenarios, it might be more and more difficult for developing countries to narrow the gap. In other words, the economies that have been rapidly climbing up the economic ladder might face a “late convergence stall”.

The threat of a convergence stall might result from the development of four challenges that were non-existent during the formative stages of the developed world. The first and the most crucial one is the end of rapid globalisation that benefitted the East Asian economies and even China. High levels of export growth rates of these countries have been the drivers of their economic growth stories. Developing nations that are late to the global scene cannot expect to achieve such export levels in the current inward-looking shifts in trade policy, especially across the developed world.

Subramanian always remains careful in stating that it is the era of “hyper-globalisation” (or rapid globalisation) which has come to an end, and not globalisation per se. However, globalisation, if defined as a period when trade among nations is growing faster than the global GDP growth, can be seen to be growing rapidly from 1950 till a few years after the economic crisis of 2008. During this period, the growth in trade was close to 5 per cent while growth in the world GDP was close to 4 per cent.

After 2010, the growth in world trade levels has fallen below GDP growth, marking an era of de-globalisation (3.5 per cent economic growth against global trade growth of 2 per cent). Therefore, even though the Survey takes a conservative approach in claiming that globalisation has come to an end, the data shows that the world is, in fact, de-globalising.

It may be that such low levels of trade might not hold once the world economic growth is running in full throttle, but the fact of the matter remains that the developing world cannot reap the same gains that were received in the later part of the 20th century. This could bring about the historical divergence that world economies had experienced throughout much of modern economic history. This trend was famously evidenced by Harvard’s Lant Pritchett, in his paper ‘Divergence, Big Time’, where he showed that between 1870 and 1990, the richest and the poorest countries have shown a considerable divergence between their per capita incomes. Therefore, the convergence has only been a recent phenomenon. It would not be a surprise if it returned.

To make matters worse, other avenues of economic development that had been open earlier are also closing down. While industrial expansion was the most effective means of achieving economic successes for poor economies in the past, high productivity has implied that economies in current times reach the pinnacle of industrial employment much earlier on their growth path.

Turkish economist Dani Rodrik, also from Harvard, calls this “premature deindustrialisation” and shows how most of the developing world is affected by it. Therefore, resources which would earlier shift from the low-productivity informal sector to high-productivity jobs, now usually shift to sectors that are only marginally more productive. The economic gains from a shift of labour across sectors are thus, not derived to an extent that was true for the countries that are now high up on the income spectrum.

The case for a slowing down of convergence or divergence is, therefore, quite strong. The developing world needs to be prepared for any such restoration of the past economic trend. The advent of automation and similar technological innovations will further accentuate the problem because the richer countries will be more capable of deploying them for production on a mass scale. It is comforting to realise that the Indian government is well aware of the threat in advance, but it remains to be seen if this awareness is followed up with appropriate policy action.

The Economic Survey gets it right in recommending rapid improvements in human capital to sustain growth at current levels; but, takes a defeatist approach in suggesting that India can do very little about diminishing globalisation. On the contrary, there remains immense scope for the country to play an enabling role in the further integration of the global economic order. If the US is currently a lost cause, there remain other large markets like the EU and East Asia where India can further the cause of higher trade openness.IANS

The article was published with Millennium Post, Telangana Today, Business Standard, and The Quint on February 13, 2018.