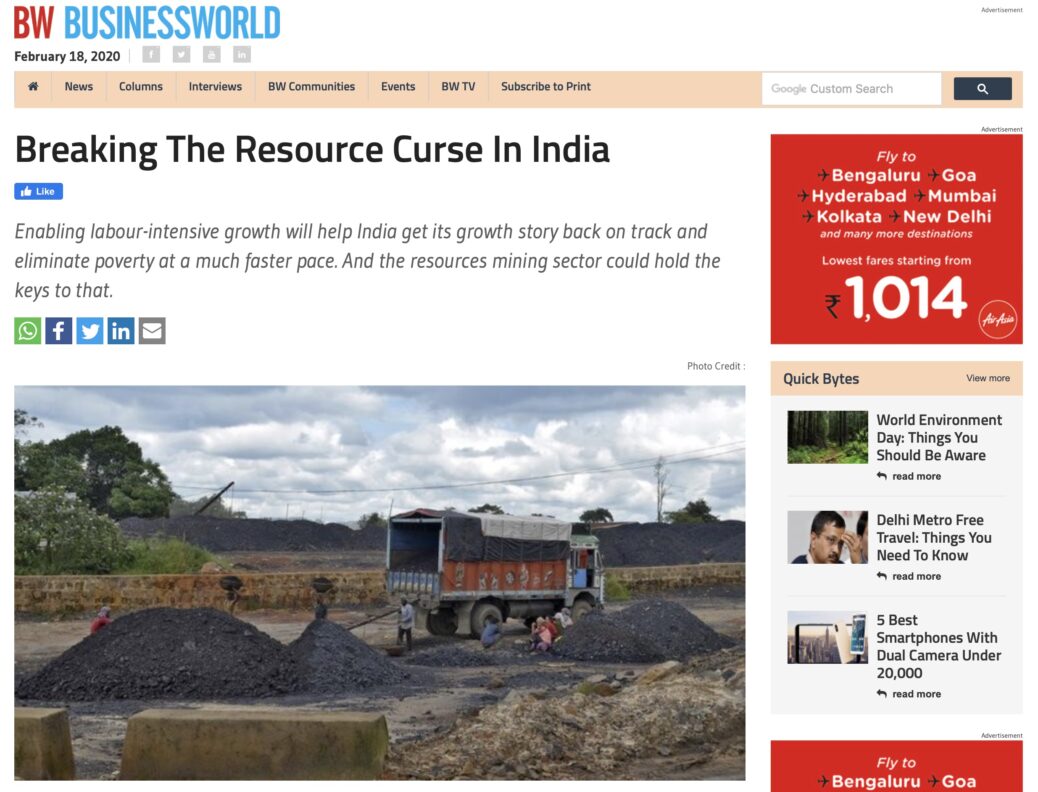 India has an abundance of mineral deposits with the country producing over ninety different types of minerals. The country is among the highest producers of steel, coal, and iron in the world. However, as of 2017-18, the mineral sector – excluding petroleum and natural gas – merely accounted for 1.53 percent of the country’s GDP. Additionally, the resource-rich states in India – Jharkhand, Odisha, and Chhattisgarh – have some of the lowest per capita incomes in the country. These statistics highlight the counterintuitive phenomenon – the so-called “natural resource curse” – where the resource-rich regions are often also the ones with poor development outcomes.

A problem of regulation is worsening the situation further. While India’s resource industry has suffered from various issues from illegal mining to environmental concerns, it has also over-corrected them as reflected through the Supreme Court ruling to cancel numerous mining leases across the country. These rulings have brought the mining sector to a halt over the last few years. The introduction of the National Mineral Policy 2019 might change the situation for better by bringing in more clarity in regulation. Addressing the issues ailing the sector will have pertinent implications for the larger economy.

The labour-intensive nature of the mining industry means that the sector has immense employment generating potential. According to estimates, with every 1 percent increase in economic growth, the employment generated by the mining sector is thirteen times more than agriculture and six times more than manufacturing. Also, as per a study conducted by the Institute for Competitiveness on Vedanta Resources, it was estimated that there were 17 additional jobs created in the economy indirectly for every job created by the company.

Thus, addressing the issue of resource curse while reinvigorating the resources sector can create crucial job opportunities. This would be a key step at time where unemployment  reached 6 percent in 2017-18 as per the Periodic Labour Force Survey (PLFS) released in early 2019.

Reforming and revitalizing the mining sector is also important for the growth of the national GDP. India aims to become a 5 Trillion USD economy by the year 2025 and, therefore, reinvigorating of the sector could be one of the possible solutions. Countries such as South Africa and Australia, where the non-fuel mineral sector contributes 8 percent to the GDP, are examples of how a strong resource sector drives the economic growth of the country.

The growth of the resource sector leads to both direct and indirect effects that impact the national economy. There are multiple ripple effects that resonate throughout the economy. The first is an indirect impact that results in an increase in output of the industry’s suppliers as well as other suppliers down the line. And the second is the induced impact, which is created beyond businesses through the rise in income levels of industry workers and the resulting demand that they generate.

According to the aforementioned study of Vedanta resources, its direct impact on the economy amounts to about 0.4 percent of the country’s GDP, an indirect impact of 1 percent and an induced impact that equals about 2.2 percent of India’s GDP. With such small contributions, there can be a cumulative larger impact in terms of job and economic growth.

The National Minerals Policy is a step in the right direction, but policy needs to be completely conducive towards driving the growth of the resource industry. Enabling labour-intensive growth will help India get its growth story back on track and eliminate poverty at a much faster pace.  And the resource mining sector could hold the keys to that.

The article was published with Business World on January 29, 2020.