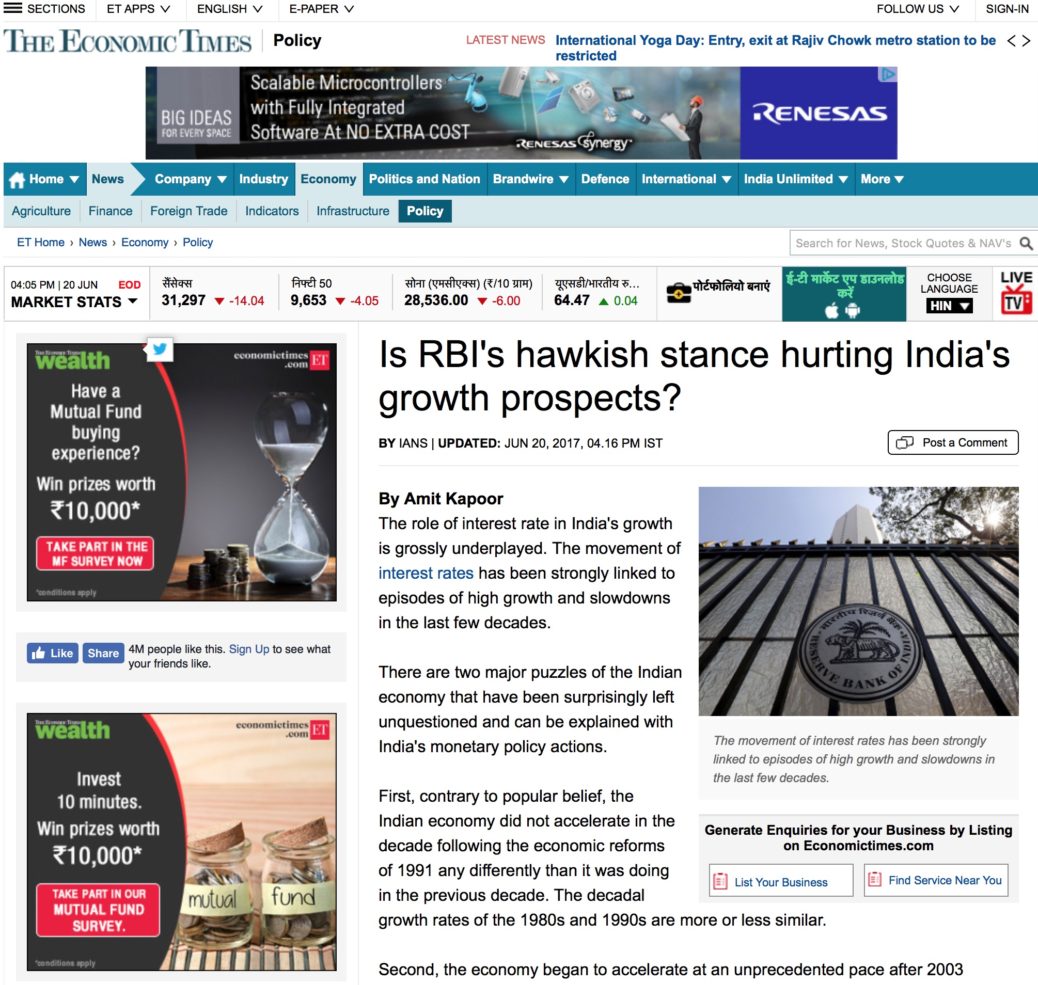 The role of interest rate in India’s growth is grossly underplayed. The movement of interest rates have been strongly linked to episodes of high growth and slowdowns in the last few decades. There are two major puzzles of the Indian economy that have been surprisingly left unquestioned and can be explained with India’s monetary policy actions. First, contrary to popular belief, the Indian economy did not accelerate in the decade following the economic reforms of 1991 any differently than it was doing in the previous decade. The decadal growth rates of the 1980s and 1990s are more or less similar. Second, the economy began to accelerate at an unprecedented pace after 2003 without the benefit of any new phase of reforms. There have hardly been any studies to explain the “why” behind these two trends.

One of the first study highlighting the constancy of India’s growth rate for the 1980s and 1990s was produced by Surjit Bhalla, who showed that non-overlapping three year averages of any economic indicator – GDP growth, money supply, fiscal deficits, industrial production – were an unchanging constant throughout these two decades. In fact, GDP growth from 1980-89 was 5.7 percent and between 1990-2002 was 5.2 percent. Bhalla (2010) points out that the GDP growth did accelerate to 7.4 percent in each of the three years between 1994 and 1997 in response to economic liberalisation. However, RBI perceived the economy to be overheating and tightened monetary policy. As inflation was falling during this period, the real interest rate reached double digits and growth collapsed. The fall in growth also needs to be looked in light of the Asian financial crisis, which Bhalla ignores, but the contribution of the hawkish stance of the central bank cannot be side-lined.

By 1999, inflation had reached a low of 3.5 percent and the government decided to undertake interest rate reforms. In a span of four years, bond yields fell to 5 percent from the double-digit figures in the previous decade. Savings and investment rate which hovered around 25 percent in the decade from 1993 to 2002, increased rapidly reaching 39 and 42 percent respectively by 2007. Between 2004-07, real interest rates were at 2.1 percent compared to 5 percent in late 1990s. Clearly, these trends played a crucial role in ushering in the longest period of strong economic growth in Indian history of above 9 percent per annum.

Thus, monetary policy actions can explain the puzzles in the episodic growth and slowdowns of the Indian economy. This is not to argue that interest rates are the only determining factor of economic growth, but estimates show that a 500 basis point decline in real interest rate can boost GDP growth by 1.5 to 3 percent. So, the pursuit of lowering inflationary expectations with tight monetary policy should not come at the cost of economic growth. The recently established Monetary Policy Committee (MPC) needs to keep this in mind when deciding upon policy rates.

In February, when markets expected the RBI to continue with its dovish stance following excess liquidity with banks due to demonetisation, the central bank changed its stance from accommodative to neutral. The MPC cited three major risks for inflation that led it to do so: a rise in international crude oil prices, volatility in exchange rates on global cues which could lead to imported inflation, and the impact of the seventh pay commission recommendations.

Surprisingly, none of the factors have materialised in the months that have followed the change in MPC’s stance. In fact, all of them have moved in the opposite direction. OPEC’s supply cuts have failed to raise oil prices, rupee has grown stronger, and inflation has lowered further. In light of these factors, a dovish stance from the MPC was expected. A continuity in its stance this month as well is only hurting growth at a time when investment sentiments need to be revived. Hopefully, since latest estimates show that inflation is on track to meet MPC’s target of 4 percent inflation by March 2018, the economy will witness much-needed rate cuts in the August policy announcement.

Nevertheless, considering the importance of monetary policy in determining economic growth outlined above, the MPC needs a defined model to pursue its goal of controlling inflation expectation without hurting growth prospects. It also needs to avoid springing repeated surprises on the market to prevent unnecessary volatility. In February, the abrupt shift in stance triggered a huge sell-off in the bond market that led to a sudden surge in yield by over 50 basis points.

The establishment of MPC was meant to infuse predictability and informed decision-making within the country’s monetary policy decisions. That seems to have been missing in the last few policy meetings of the committee. The MPC needs to realise the influence that its decisions have on the country’s growth rate and job creation prospects. India urgently needs to regain the level of growth it witnessed since 2003 and a lot needs to be done including an urgent resolution of bad loans, which seems to be have begun. But, avoiding an unnecessary hawkish stance by the RBI would supplement government efforts in reviving investor sentiments.

The article was published with Economic Times on June 20, 2017.