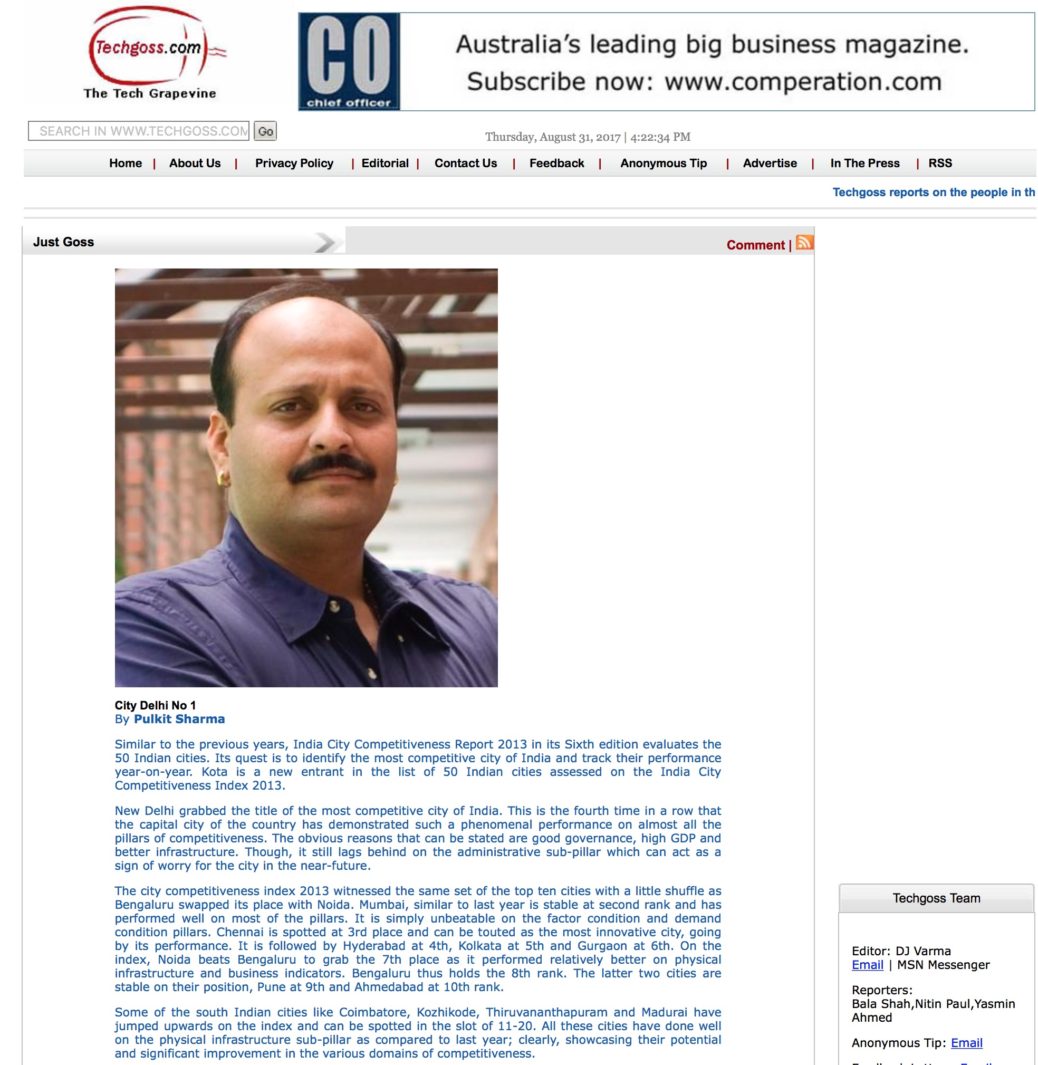 New Delhi grabbed the title of the most competitive city of India. This is the fourth time in a row that the capital city of the country has demonstrated such a phenomenal performance on almost all the pillars of competitiveness. The obvious reasons that can be stated are good governance, high GDP and better infrastructure. Though, it still lags behind on the administrative sub-pillar which can act as a sign of worry for the city in the near-future.

The city competitiveness index 2013 witnessed the same set of the top ten cities with a little shuffle as Bengaluru swapped its place with Noida. Mumbai, similar to last year is stable at second rank and has performed well on most of the pillars. It is simply unbeatable on the factor condition and demand condition pillars. Chennai is spotted at 3rd place and can be touted as the most innovative city, going by its performance. It is followed by Hyderabad at 4th, Kolkata at 5th and Gurgaon at 6th. On the index, Noida beats Bengaluru to grab the 7th place as it performed relatively better on physical infrastructure and business indicators. Bengaluru thus holds the 8th rank. The latter two cities are stable on their position, Pune at 9th and Ahmedabad at 10th rank.

Some of the south Indian cities like Coimbatore, Kozhikode, Thiruvananthapuram and Madurai have jumped upwards on the index and can be spotted in the slot of 11-20. All these cities have done well on the physical infrastructure sub-pillar as compared to last year; clearly, showcasing their potential and significant improvement in the various domains of competitiveness.

An in-depth study of the cities states that the cities considered being small such as Rajkot, Faridabad, Meerut, Dehradun and Shimla are no more underdeveloped. Instead, these cities are the budding growth centers of the economy which are moving up on the city competitiveness index at a fast pace. They are adding up to the overall competitiveness of the country with the help of their distinctive and untapped potential. To exemplify, Faridabad and Meerut proximity to the National Capital Region (NCR) and their internal growth has resulted Faridabad to become the next most desired business destination and Meerut as the popular education hub. The analysis also illustrates that few cities are loosing their charm in comparison to above-mentioned cities. To name a few, Indore slipped to 23rd, Mysore to 26th, Ludhiana to 32nd and so on.

Author of the report, Dr. Amit Kapoor (pictured above), said, “Today Indian cities are trying to do a lot of things without assessing their long term impact. A proper ecosystem needs to be built around them that emphasizes on using the resources productively. Cities should have their own value proposition so as to sustain their identity and enhance their competitiveness in the long run.”

Ankita Garg, Senior Researcher, Institute for Competitiveness also commented, “Every Indian city is moving on a very different trajectory. Some are growing aggressively with a balanced model of growth while others are still in their nascent stage of development. However, most of them are facing similar set of challenges. It is thus essential that all the major stakeholders promptly come on a common platform and instead of playing a blame game, lend a helping hand in the growth of their city.”

The article was published with techgoss.com on December 20, 2013.