Building Character: The Role of Branding in Growing a City 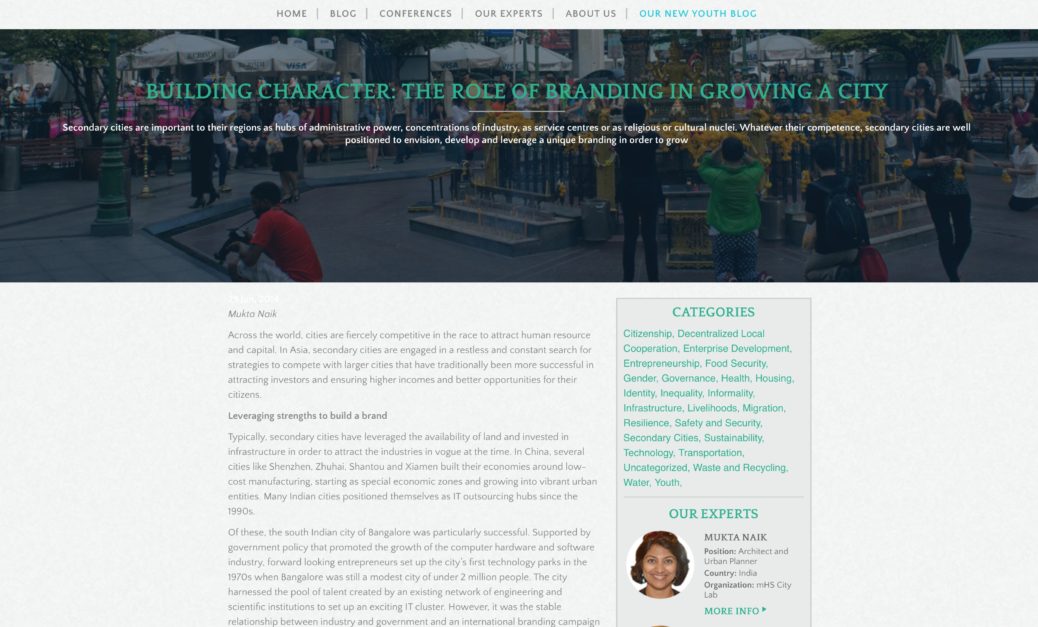 Secondary cities are important to their regions as hubs of administrative power, concentrations of industry, as service centres or as religious or cultural nuclei. Whatever their competence, secondary cities are well positioned to envision, develop and leverage a unique branding in order to grow

Across the world, cities are fiercely competitive in the race to attract human resource and capital. In Asia, secondary cities are engaged in a restless and constant search for strategies to compete with larger cities that have traditionally been more successful in attracting investors and ensuring higher incomes and better opportunities for their citizens.

Leveraging strengths to build a brand

Typically, secondary cities have leveraged the availability of land and invested in infrastructure in order to attract the industries in vogue at the time. In China, several cities like Shenzhen, Zhuhai, Shantou and Xiamen built their economies around low-cost manufacturing, starting as special economic zones and growing into vibrant urban entities. Many Indian cities positioned themselves as IT outsourcing hubs since the 1990s.

Of these, the south Indian city of Bangalore was particularly successful. Supported by government policy that promoted the growth of the computer hardware and software industry, forward looking entrepreneurs set up the city’s first technology parks in the 1970s when Bangalore was still a modest city of under 2 million people. The city harnessed the pool of talent created by an existing network of engineering and scientific institutions to set up an exciting IT cluster. However, it was the stable relationship between industry and government and an international branding campaign that consolidated Bangalore’s position as the ‘Silicon Valley of India’. Today, the city of 9.6 million has a GDP of about $85 billion, the 4th highest among Indian cities.

For many Asian cities, however, branding has remained a shallow and ineffective exercise that hasn’t translated into long-term benefits. Political meddling and an inadequate emphasis on public consultations have played havoc with many well-intended branding exercises.

Says Malaysia-based branding expert Marcus Osborne, “With few exceptions, many cities that made strategic decisions have done so accidentally and then implemented a series of tactical initiatives with varying levels of success.” After the initial euphoria of success, cities have not only found it difficult to sustain productivity, but have also struggled to offer opportunity, income and a decent quality of life to citizens in a sustained manner.

Aiming for a unique competitive position

Beyond branding therefore, the idea of being unique must be embedded in a larger understanding of the city’s competitiveness, which is defined as the manner in which a nation, region or city uses labour, capital and resources to bring about productivity. Explains Amit Kapoor, Chairman of the Institute for Competiveness based in Gurgaon, India, “It is vital for each city to have its own value proposition. Successful cities across the world are those that have specialized, built upon their advantages.”

Hangzhou, capital of China’s Zhejiang province, for instance, has been able to intelligently converge its inherent locational advantages with its investment plans. Capitalizing on Hangzhou’s identity as a 1000-year old historic centre, city and regional governments collaborated to develop the city as a cultural and creative centre. They invested in industries like animation films, video games, design services, modern media and cultural products, while also setting up education institutions to provide skilled workforce and get global exposure through the organization of over 60 annual cultural conventions and exhibitions. As per a 2011 report by KPMG Advisory, Hangzhou’s cultural and creative industry comprised 12-13% of the city’s GDP, which was RMB 594.6 billion (USD 97 billion) in 2010.

Gurgaon, outside New Delhi, was an automobile hub in the 1990s.

Cities also need to be aware of their growth trajectory over time to be able to leverage their unique attributes. Gurgaon, a suburb of India’s capital New Delhi positioned itself as an automobile hub in the early ‘90s. A few years down the line, owing to inadequate supply of office space in New Delhi, the city became a preferred investment destination for the IT, business process outsourcing and services industries. The cost of labour escalated, making automobile manufacturing unviable. Today, as traffic stands still on the city’s congested roads and real estate rentals are unsustainably high, IT companies are also moving out to less costly locations. “These sort of deglomeration effects over time need to be anticipated”, cautions Amit Kapoor, “if a city is to continue to be productive.”

In contrast, other secondary locations like Pimpri Chinchwad, Sriperumbudur, Aurangabad and Ahmedabad have been able to evolve into well-performing automobile clusters. Over time, they have seeded ancillaries around them and moved up the value chain by retaining the focus on their locational advantages and ensuring access to low cost labour. Consequently, disposable incomes have risen in these cities and they offer improved opportunities for their residents. Ahmedabad, for instanced rose from position 17 in 2011 to being the 12th most liveable city in India in 2012, as per the liveability index brought out by the Institute for Competitiveness.

A just way to urbanise

Economic development, however, is sustainable only if cities are able to change the strategy from a mere exploitation of resources to their rightful utilization over a longer period of time. As Asian nations urbanise, the biggest challenge for cities will be to find ways to do so in a just manner.

Cities will need to adopt more inclusive and participatory processes to build their branding. Further, national governments will need to empower cities to be more autonomous, recognizing the critical role of strong local leadership and building capacity of local governments. As decentralised, powerful urban units, secondary cities will not only be more successful in leveraging their unique attributes, but also be more effective in contributing to national economic growth.