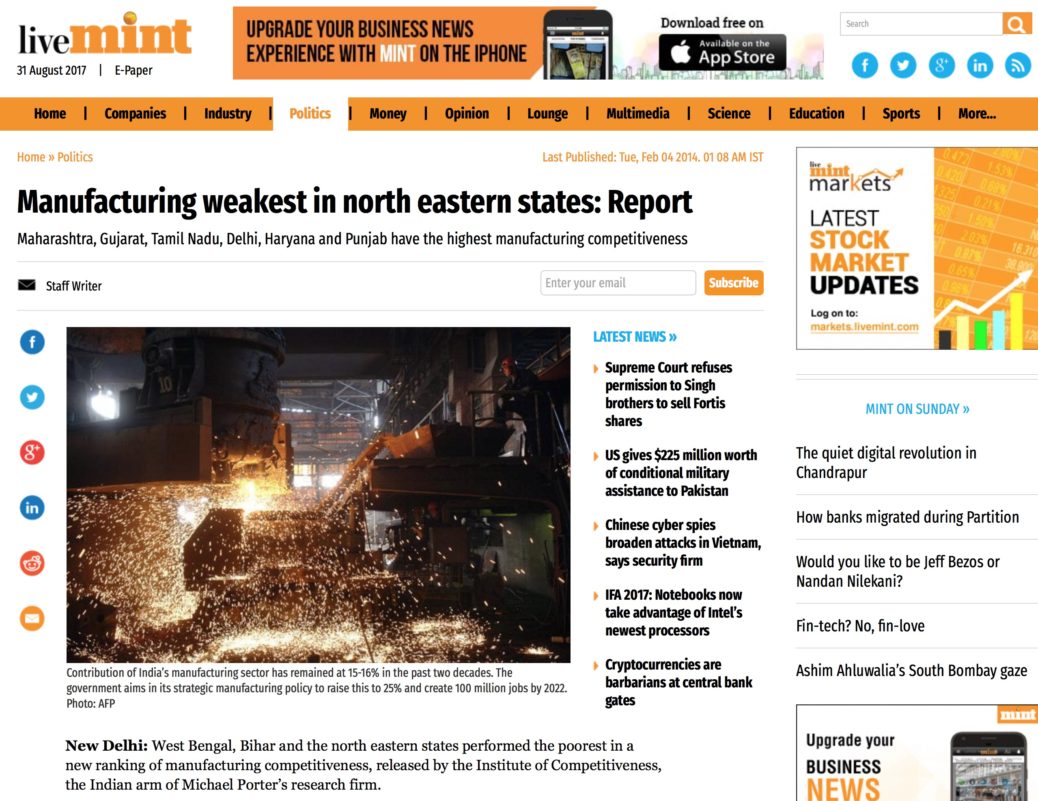 Methodology:
The Manufacturing Competitiveness Index 2014 draws conceptual antecedents from a recent paper on &ldquo;The Determinants of National Competitiveness&rdquo; by Porter et al. Professor Michael E Porter is a Bishop William Lawrence Professor at Harvard University. The index draws on the concept of foundational competitiveness as the expected level of output per working age individual. This is a better way of measuring competitiveness rather that the traditional output per individual as the earlier concept also included children and retired people who were not really contributing directly to the increases in productivity. The index is thus constructed based on 4 interrelated factors ofCompany Operations and Strategy (COS), State Business Environment (SBE), Social Infrastructure and Political Institutions (SIPI) and Macroeconomic Indicators (MI).

Based on the methodology states and union territory of Delhi were divided into 6 categories based on the stage of manufacturing development. These are city-states bracket, strong states, medium to strong bracket, medium bracket, weak to medium bracket and weak bracket.

For more information on the results, kindly visit:

Learning and Policy Imperatives:
The report can be useful for drawing policy lessons both for corporates and businesses and what steps each of these could take to strengthen manufacturing at a regional level in India. The report also draws lessons from an international perspective, which could be used to boost India&rsquo;s manufacturing. Specific among these being the rise of China, Germany and Korea basis their focus on export competitiveness in international markets in the past 8-10 years. It concludes with possibilities for improvement and suggestions to improve the manufacturing competitiveness of states by focusing on distinct strategies, which lead to sustainable competitive advantage.

Authors:
The report has been co-authored by Dr. Amit Kapoor and Sankalp Sharma.

The report was covered by Mint, AndhraNews.net and Indiainfoline on February 5, 2014.