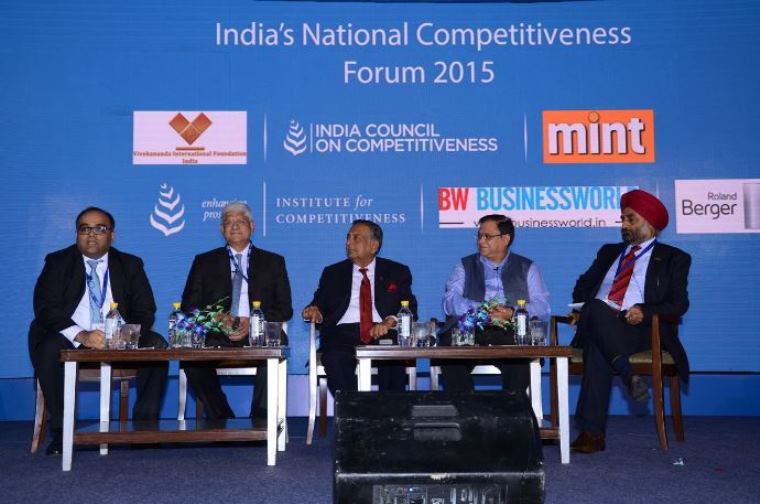 The second edition of India’s National Competitiveness Forum was held on September 25, 2015 at The Leela, Gurgaon. It is a flagship event of India Council on Competitiveness, which aims to drive Indian productivity, competitiveness and leadership in the world market via its activities. The forum started with an opening, two keynotes and was followed by four intriguing panel discussions.

In the morning, Wilfried Aulbur (Chairman, India Council on Competitiveness & Managing Partner & CEO, Roland Berger) and Michael Enright (Director at Enright, Scott & Associates) set the agenda for the day. Wilfried brought the gungho spirit India is manifesting as it goes about carving its space in the global economy. He analytically dispelled many myths in comparison with India and China stating, “Chinese success is applaudable but we should also look at the fact that they started 13 years before India.”

Professor Enright discussed the inappropriateness of World Economic Forum indices since they show how countries operate inside the noise of the large standard deviation in rankings impaired by opinions. He stated, “At World Economic Forum, 70% of the data is from their opinion based survey and not based on actual performance of regions.” He set the tenor of the day by posing triggers on ‘Make in India’ and asked where India’s Hong Kong is.

Rajiv Bajaj, Managing Director, Bajaj Auto started by articulating the meaning of ‘”Less is more” that instead of trying to do more, companies should narrow and sharpen their focus on just one activity. With infectious forthrightness he revealed his practitioner’s formulation of strategy as applied by Bajaj Auto over last 12 years and said, “When we wanted to go from being a local to global player to demonstrate our excellence, we did not predict our success because predications are always full of error.”

The forum then kick-started with its first session “India’s present Manufacturing Capability, Future Potential and the way forward” and discussed why it is essential to make in India. Points made were like only those regions are picked for manufacturing where it is easy to manufacture where labor cost is low, raw material is cheap, and an abundance of skilled workforce and connectivity of transpiration is excellent. So to make India a manufacturing hub, it is important to understand that which sectors are good in terms of producing products efficiently and at low cost. Also, the focus should be laid on manufacturing for the global economy and not just for local demand.

It was then followed by a panel discussion on “Succeeding in a tough environment & what are the best locations for Make in India – The ideas of States and Cities”, which focused on the challenges being faced by Indian States and Cities to emerge as promising manufacturing locations. The reasons discussed were lack of infrastructure facilities and cluster-based approach. It was suggested that the clusters should be optimized to provide four kinds of infrastructure: Physical Infrastructure (Rail, Road, and Water), Regulatory and Policy (Ease of doing business), Business Infrastructure (Linkages within the clusters) and Social Infrastructure (Quality development of the cluster). Also, attention should be paid to detail to get rid of corruption and governance mechanism needs to be supportive in terms of making starting, running and closing of business easy.

One of the most important and awaited session of the day was on “Enhancing Manufacturing Capability in the Defence Sector”. It emphasized that attention should be paid on opening the Defense vehicle manufacturing sector for the Indian companies since India already has proved its mettle in manufacturing vehicles at a low cost. When compared with the foreign company vehicles, the quality was proved to be equal in all the tests performed by the Indian Army in various weather conditions. It is a great achievement for India and the potential in this area should be further harnessed.

Discussions were also made on “Future of Manufacturing in Global Economy”, wherein suggestions were made to make the ‘Make in India’ initiative successful. It was mentioned that India could reorder things so that it do not make the same mistakes made by other countries. India needs to create centers of excellence driven by government funding in three to four areas like Internet of things, Robotics, etc. which will become a base to percolate the learning to move down from industry to MSME.

Terence Tse, Associate Professor of Finance at the ESCP Europe Business School addressed the attendees in the session “India and the EU: How Make in India can help International Expansion and build new value chains” and pointed out that Europe provides a fantastic opportunity for Indian companies, and there is a need to push this agenda to make the deal beneficial for both. Since EU companies have been looking for new partners, want to expand their services and move over from China. So India has a chance to seize this opportunity as China is getting expensive, and India has got a better base for global companies. India should, therefore, start moving the conversation to the next level saying ‘Make by India’ and not ‘Make in India.’

About India Council on Competitiveness