The Budget and India’s Future 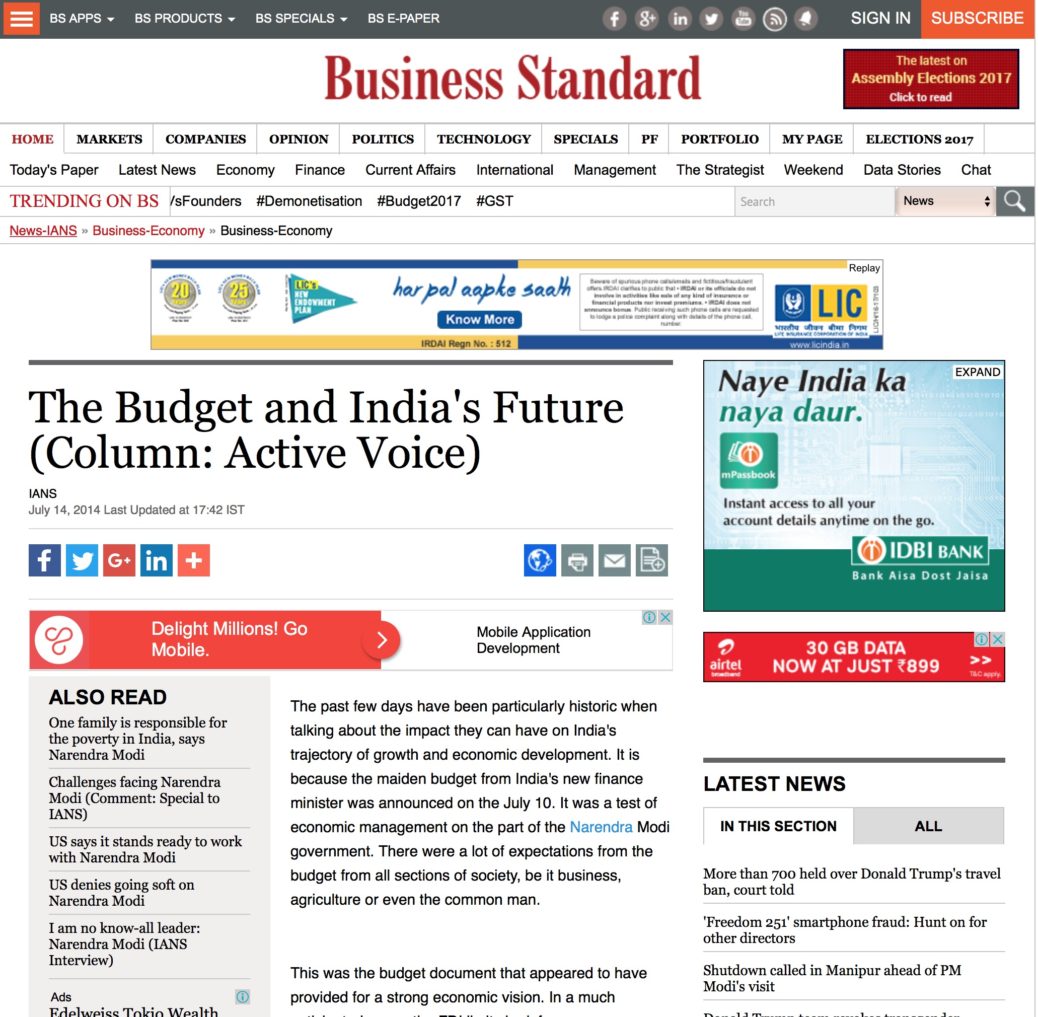 The past few days have been particularly historic when talking about the impact  they can have on the trajectory of growth and economic development of India. It is because the maiden budget from India’s new FM was announced on the 10th July 2014. It was a test of economic management on the part of the Modi government. There were a lot of expectations from the maiden budget from the Finance Minister from all sections of the society be it business, agriculture or even the common man.

This was the budget document that appeared to have provided for a strong economic vision. In a much anticipated move, the FDI limits in Defense manufacturing and Insurance were moved up to 49 % from the 26% cap which shows a firm intent on the part of the government to reform the economy.

Over the past few years, the country has experienced growth in expenditures which have not been able to keep pace with the growth in revenues leading to a fiscal deficit which is above the 3 % limit prescribed according to the FRBM act of 2003. It had lead the FM to indicate in a recent speech[1] given to the Chartered Accountants just days before the budget where he mentioned about the priority for fiscal constraint over mindless populism. It was because according to him mindless populism did not help the incumbent UPA win elections. Generally speaking, there is an ‘either/or’ between the two words populism and economy. However, the FM in his maiden budget according to us has tried to marry the two.

The budget has not substantially cut down on the previous schemes but has recalibrated them in a manner, which could benefit the country. Some schemes on infrastructure especially investment in NHAI and state roads to the tune of Rs. 37,880 crores will help have a multiplier effect in the economy.  Also, several new schemes have been introduced notably among them being  ‘one hundred smart cities’ (7060 Crores), National Level Skill Program (Skill India) and  Pradhan Mantri Krishi Sinchayee Yojana (Rs 1000 crores) which will help address urbanization, employment and agriculture respectively.

The focus for the budget was clearly on the economic aspects rather that pure populism. Though continuing the previous government’s schemes goes on to show the maturity of the present government in dealing with the issues that matter to the people. In our view, there was clearly a distinct rightward shift as is seen from the likes of scheme on entrepreneurship for which the FM has set aside a sum of 10000 Crores as well as the step to increase the FDI limits.

Investments in India have taken a hit due to a decline in the overall business environment. The FM has done his bit by the asking the PSU’s to invest a sum of Rs. 2,47,941 to create a virtuous cycle of investment. It is in addition to lifting the cap on FDI’s as well as as providing relief (in tax terms) to Real estate Investment trusts (REITs) which shows some definite steps taken to fuel investment. Apart from this, increasing the PPF (Public Provident Fund) limit, as well as the investment limit under Income tax act to 1.5 lakh from 1 lakh, will do their bit to encourage domestic savings and investment.

One of the biggest achievements of the budget has been in its ability to provide relief and direction to both ordinary people and business. Be it increasing the tax exemption limit very minutely from 2 lakh to 2.5 lakhs in the case of individual taxpayers or addressing the issue of retrospective taxation (to be undertaken in fresh cases only  by constitution of a committee by CBDT (Central Board of Direct Taxes) in case any action is initiated in such matters). Also, there is a focus on entrepreneurship (with setting up a Rs. 10,000 crore fund) and focusing on a stable tax policy as well as easing the conditions for doing business both for big corporations, as well as small and medium sector enterprises.

What will separate this budget is not the content or form of it, but the way in which it gets implemented. We feel the revenue targets will be a difficult to meet. But all in all it is a visionary budget. In our opinion the FM has been criticized for the 29 schemes that were of 100 crores each, it is the best way really to put in the money. If massive allocations are done upfront the impact of failure is catastrophic. To gauge the depth of the river with one foot is indeed wise economic policy. Apart from that it shows meticulous micro planning. The budget seems to have taken the first corrective steps to reform the economic woes that the economic survey had pointed out in its chapter ‘Issues and priorities.’ What remains to be seen is how these issues and priorities are resolved at the ground level. This will point to the general direction in which India is headed in the years to come

Published with Business Standard on July 14, 2014.