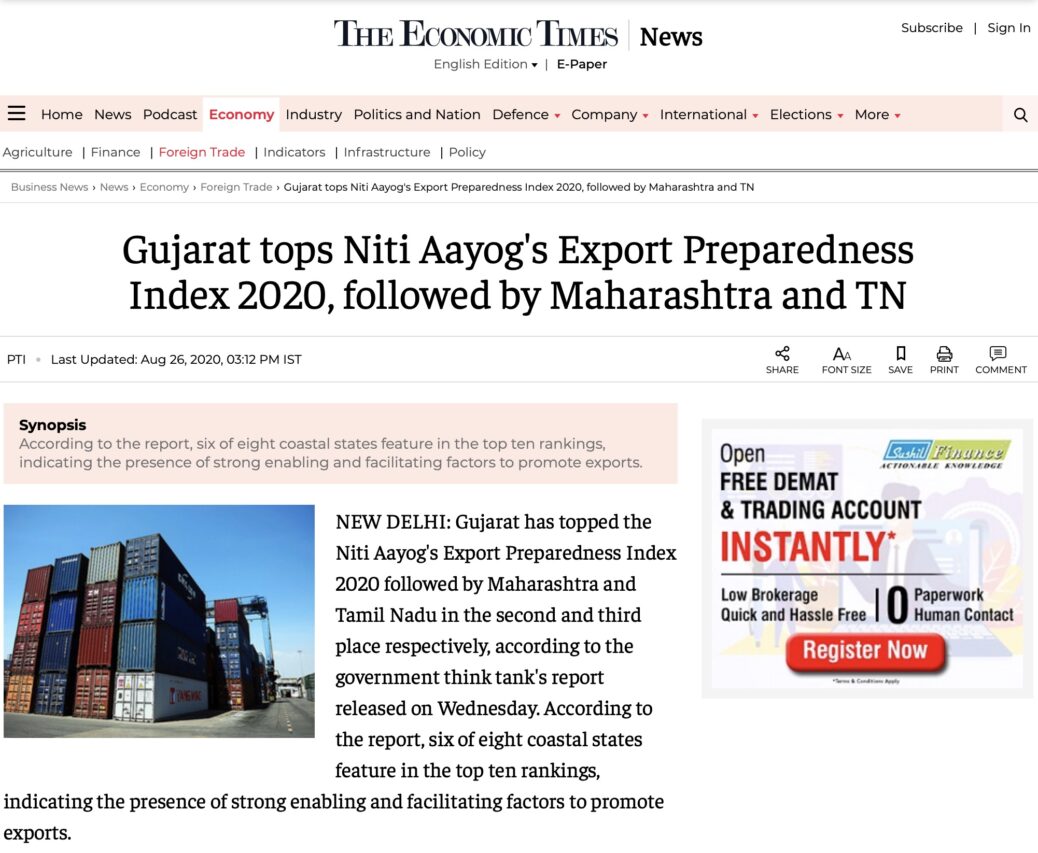 According to the report, six of eight coastal states feature in the top ten rankings, indicating the presence of strong enabling and facilitating factors to promote exports.

Gujarat has topped the Niti Aayog’s Export Preparedness Index 2020 followed by Maharashtra and Tamil Nadu in the second and third place respectively, according to the government think tank’s report released on Wednesday. According to the report, six of eight coastal states feature in the top ten rankings, indicating the presence of strong enabling and facilitating factors to promote exports. Among the landlocked states, Rajasthan has performed the best, followed by Telangana and Haryana.

Among the Himalayan states, Uttarakhand topped the chart, followed by Tripura and Himachal Pradesh, the report said adding that across Union Territories, Delhi has performed the best, followed by Goa and Chandigarh.
The report noted that Chhattisgarh and Jharkhand are two landlocked states that had initiated several measures to promote exports. Other states facing similar socio-economic challenges can look at the measures taken by Chhattisgarh and Jharkhand and try to implement them to grow their exports, the report noted.

Speaking at the launch of the report, Niti Aayog Vice Chairman Rajiv Kumar said exports are an integral part of Aatmanirbhar Bharat and the country will have to keep striving to increase the share of exports in GDP and world trade. “We will try to double India’s share in world trade in the coming years,” he said.

The Niti Aayog Vice Chairman pointed out that India’s per capita exports are USD 241, compared to South Korea’s USD 11,900 and China’s USD 18,000, so there is a huge potential for growth of India’s exports, he said adding “states must look at creating a separate department for exports promotion.”  Kumar said the government of India has made it clear that production linked incentive (PLI) schemes are critical to promote exports. He said there is a need to distinguish between coastal states and landlocked states because conditions for exports in coastal states and landlocked states are very different.

The coverage was done by Economic Times on August 22, 2020