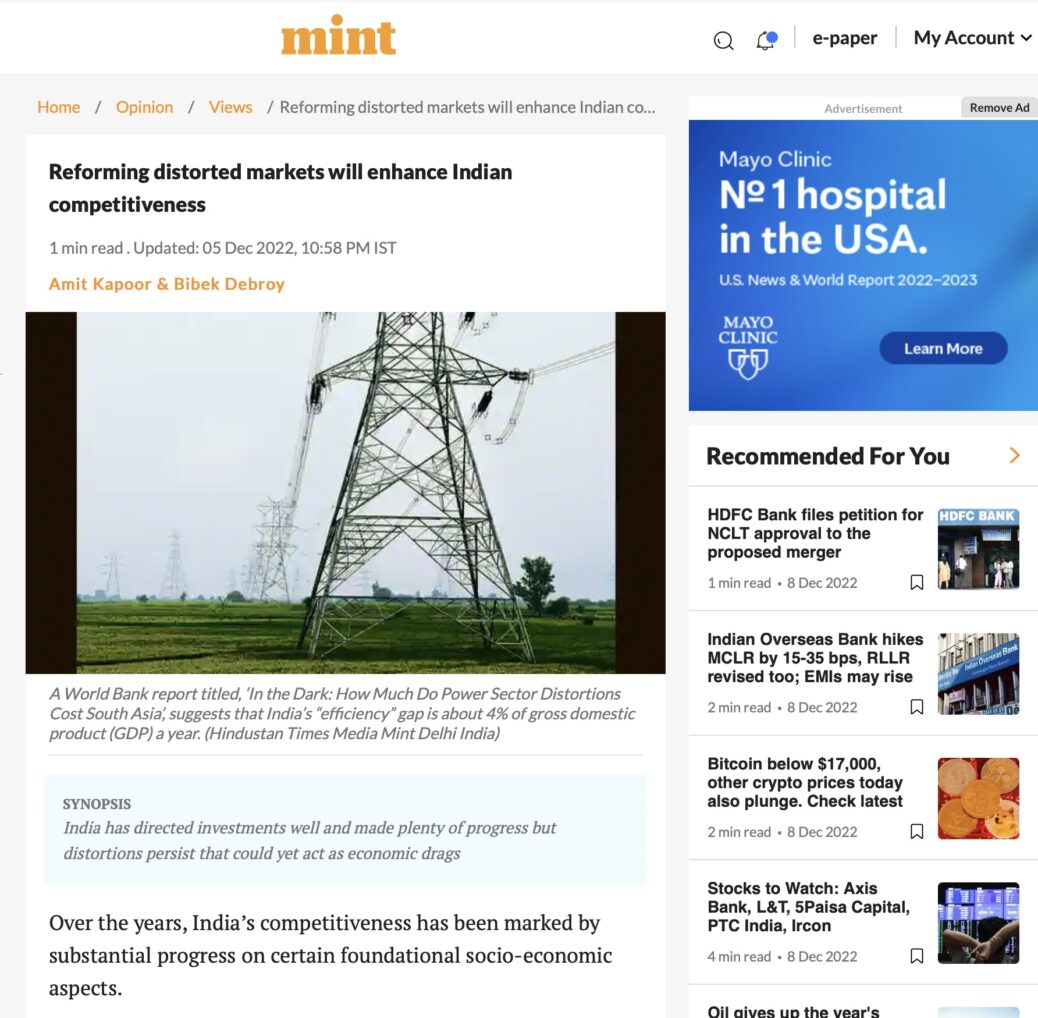 Over the years, India’s competitiveness has been marked by substantial progress on certain foundational socio-economic aspects. A lot has been said about the country’s development so far. The country has seen assessments of its past and projections of its future aplenty. A country’s competitiveness fundamentals constitute the bedrock of its society, and India has made significant strides in this arena. There have been notable developments in a range of sectors including, inter alia, expanding access to education, infrastructure development, and enhancing the quality of our business environment. With a massive expansion in the electricity network, the percentage of the population with access to electricity has jumped from 83.9 percent in 2014 to 99 percent in 2020, as per World Bank data. As compared to the period between 2007 and 2014, over five times electrification was achieved during 2014-21. Leisang village in Manipur became the last village to be included in the national power grid in April 2018. Furthermore, the country has augmented its transport infrastructure extensively. Since the beginning of the Pradhan Mantri Gram Sadak Yojana, nearly 7 Lakh km road length has been completed and 99 % of targeted habitations have been provided all-weather road connectivity. Yet another competitiveness fundamental that has seen a substantial enhancement is education. From 2014 to 2020, the number of universities in India increased from 723 to 1,043. Gross Enrolment Ratio or the percentage of students belonging to the eligible age group enrolled in Higher Education stood at 27.1% in 2019-20 against 24.3% in 2014-2015. In the last five odd years, student enrolment in higher education witnessed an increase of 11.4 percent. Additionally, food production has registered a rise from around 252 million tonnes in 2014-15 to 316 million tonnes in 2021-22.  While these strides are commendable indeed, there is significant room for economic outcomes and business experiences to improve. In order to do this, it is important to identify the focal competitiveness challenge, which if successfully overcome, shall catapult the country to an enhanced level of development.

This key competitiveness challenge lies in the built of our market structures. The underlying reason is that while India has focused on improving inputs, the market structures translating these inputs into actual outcomes, especially at a firm level, experience distortions at several points. In simple economic terms, market distortions occur when production and prices are at different levels than where they would be in a competitive market. It occurs when intervention in the supply and demand dynamic can lead to a misallocation of resources in the economy. Essentially, it is when an economy underutilises its own potential. A World Bank report titled, “In the Dark: How Much Do Power Sector Distortions Cost South Asia,” suggests that India’s “efficiency” gap is about four percent of GDP a year. The report takes a view of the entire power supply chain and points to electricity subsidies, inefficient power generation, transmission, and distribution as some of the factors contributing to power shortages. Going beyond electrification, and ensuring household-level access to regular supply of electricity is key.  India has made significant efforts to ameliorate the distortions through several schemes focusing on improving the transmission and distribution infrastructure and enhancing operational efficiency. Similarly, there is a huge scope to address market distortions in the education sector. As previously highlighted, inputs in terms of infrastructure facilities, and enrollment, have seen positive trends. However, these inputs can deliver better results if there is a greater emphasis on the quality of education. This emphasis would make higher enrollment translate into better learning outcomes. Addressing this linkage is of the essence. A recently approved centrally sponsored scheme termed PM Schools for Rising India (PM SHRI aims to develop over 14500 select schools managed by Central Government/ State/ UT Government/ local bodies across the country. One of the key features of the scheme is to provide high-quality education keeping inclusivity and equitability central. There can be a potentially positive impact on learning outcomes with the scheme’s focus on students’ diverse backgrounds, multilingual needs, and different academic abilities. The business environment is yet another area where market distortions drive up the costs of doing business. In the past, individual rules were being improved but the underlying structures and capacity of the public sector driving the regulatory burden was weak.  In recent years, India has taken more than just notice of these distortions, and has directed sincere efforts in the direction of improving market structures. Various steps have been undertaken to ease regulatory burden, and improve the ease of doing business in India. Introducing online registration for MSMEs – Udyam Registration portal, an online portal for grievance redressal and guidance provision to MSMEs, and the National Logistics Policy framework aiming to streamline processes and reduce logistics cost are some measures among a range of initiatives taken to make market structures more efficient.

It is important to understand that certain market distortions are necessary. Governments may distort market prices by, for instance, by subsidizing production in various sectors such as electronics and steel, and agriculture, when markets, left to their own devices, may not lead to efficient outcomes. The key is to understand where they are necessary and where competitive markets are effective in allocating resources in an economy. India has made real progress. Investments have been channelized in the right direction, but market distortions can potentially deliver less than optimum outcomes. India is building on the robust contours of its competitiveness fundamentals. It has ambitious plans for the future. For both the past and future reforms to deliver outcomes with maximum efficiency, the effort underway to fix market distortions must continue with greater vigour.

The article was published with Mint on December 6, 2022.