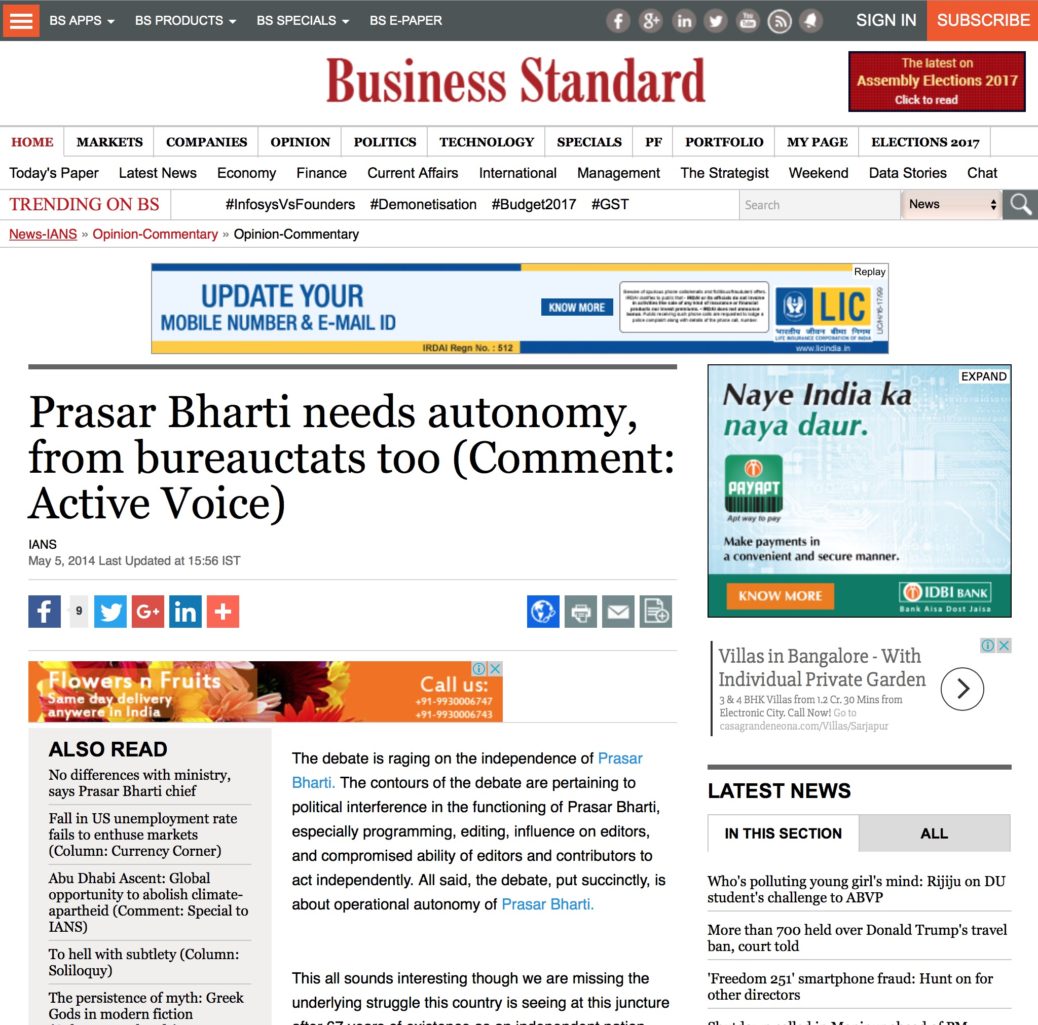 This all sounds interesting though we are missing the underlying struggle this country is seeing at this juncture after 67 years of existence as an independent nation. The struggle is about who would be controlling, ruling or managing this country? Further still its is about who, elected leaders or bureaucrats, decides the direction or path this country would follow. The fight clearly is about bureaucrats trying to wrest control of whatever independence is left away from the hands of the political and elected leaders.

The danger here is that operational autonomy is being construed and painted as one wherein the bureaucrat would have supreme independence to control the resources within Prasar Bharti. This is not only true for Prasar Bharti rather any enterprise that could be functioning under the realm of the state.

Quite clearly what we can see is that the very idea of democracy is in danger and one single institution, the bureaucrats lobby, is working exceedingly hard to annex control of this country, its independence, the ability to contribute, decide the direction etc. In the least scathing manner I can only suggest that the lobby cannot be construed to be fair, just to people and not absolutely corrupt under the influence of absolute power.

Not that they don’t control this country right now though the fight today is to control country’s resources and towards having and yielding unimaginable power. The ethical and moral standards have gone down dramatically within the bureaucracy and it compels us to understand and dig deeper into the creation of the service.

Our system of bureaucracy started with the Indian Civil Services (ICS) which was primarily built to deal with the people of India to be controlled and regulated to behave in a certain manner. The fundamental fact thus remains that creation of ICS was to have power it British hands and manage the country through the ‘brown sahibs’. The system was not built to enable real democracy rather control its population. Incidentally the system should have changed in the last 67 years though this is the last remnant of the Raj that is still visible and compromises our freedoms. A common man event today sees the bureaucrat as sahibs, maibaap, lordship et al and somebody to be afraid of and not somebody you can be friendly with.

It could be said that most of the bureaucrats join to better the state of affairs of the country or any such noble ideas but they soon turn to doing something else, bettering their prospects while doing harm to others. The system forever has remained feudalistic and shall remain until we revisit and dismantle the existing systems of governance in the country.

This piece is clearly not against the person’s involved but about the system they represent. The agony is not directed against a person per say but a general anguish at what the bureaucrats have come to represent i.e., great power and no accountability.

Anyhow I do agree with all in this case that Prasar Bharti needs independence, but independence from bureaucracy, and that too urgently. For sure Prasar Bharti needs to have independent management that is not subservient to the wishes of the lobby of the bureaucrats (babus) and an urgent action is required to need to move it out of their clutches or they (bureaucrats) can control opinion and wrest further control of this country.  The ideal situation would be to privatize the organization and let the market forces decide on its fate in the long run.

Narendra Bhai Modi (expected by many to be our next Prime Minister) has clearly said he is dismayed to see the national TV channel struggling to maintain its professional freedom. I am for sure in agreement with him and I believe what he wants to say is “Prasar Bharti needs independence. Absolutely without a doubt. Independence to operate as free media and out of the clutches of the bureaucracy”.

The call for action thus should be “It is time we dismantle the bureaucracy, take away the brute power they have within and outside the system, and let the country have Swaraj”. I would like to bring forth the ever echoing and golden words of Bal Gangadhar Tilak “Swaraj is my birthright and I shall have it”.

Published with Business Standard dated May 5, 2014.