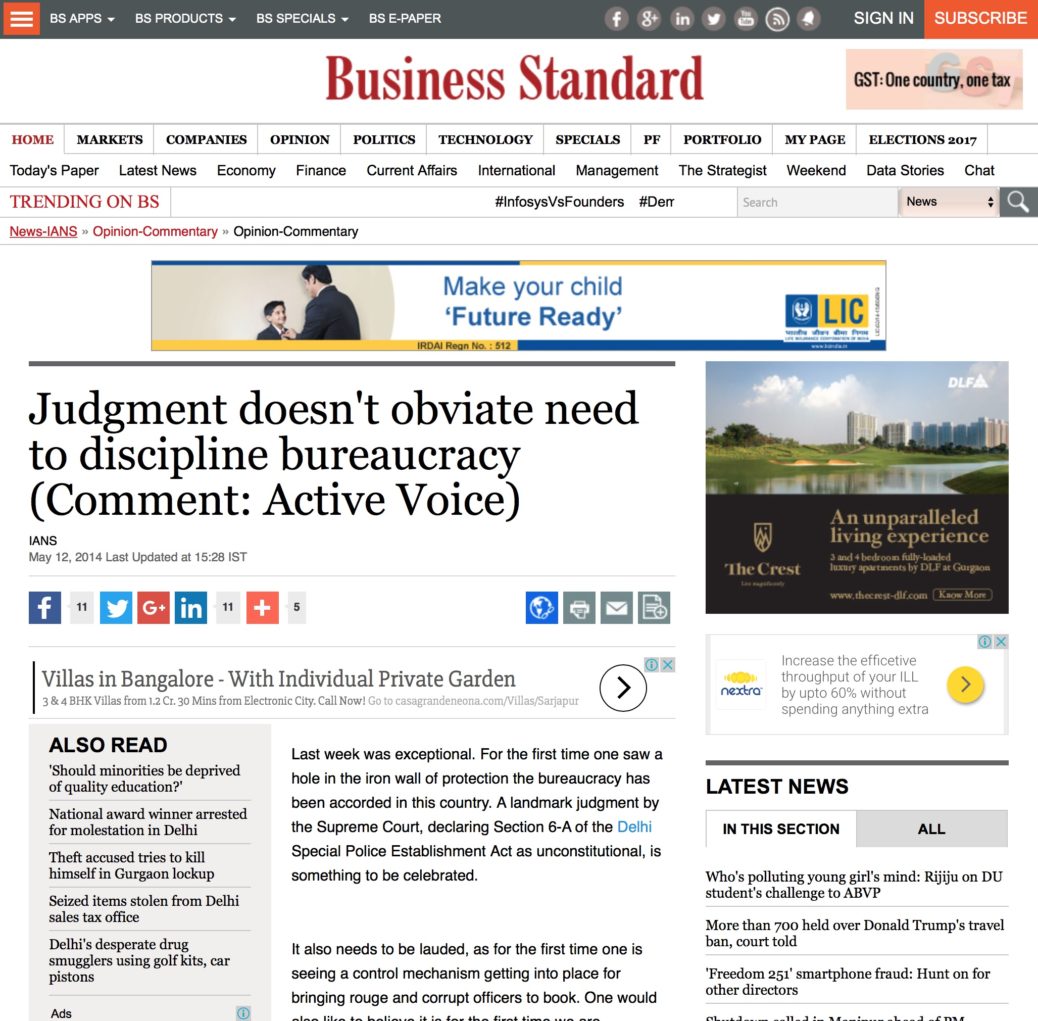 Last week was exceptional as for the first time I saw a hole in the iron wall of protection that bureaucracy has been accorded in this country. The landmark judgment by the Supreme Court declaring Section 6-A of the Delhi Special Police Establishment Act as unconstitutional is something to be celebrated.

It needs to be celebrated and lauded as for the first time we see that a control mechanism is getting into place for bringing rouge and corrupt officers to book. I would also like to believe that it is for the first time we are recognizing the fact that bureaucrats have had a field day exploiting the resources of this country and most importantly its citizenry. The celebration clearly is required as well since no permission would be required from the government to investigate a senior bureaucrat. More importantly the judgment blows a hole into the ego of the bureaucracy who were at all times seeing himself or herself as ruling class with no accountability. Quite remarkably it is for the first time we probably have equality before law between a common man and a bureaucrat. This has been made possible as the judgment clearly states that the protection accorded was in contravention to Article 14 of the constitution. I humbly bow in front of the Honorable Supreme Court to making this possible since it brings a normal citizen and bureaucrat at the same pedestal for the first time since independence.

We must certainly compliment and congratulate Dr. Subramanian Swamy for working exceedingly hard over this over the last two decades to make this possible.

I would though like to bring to the fore and to the notice of Dr. Subramanian Swamy that this is not the end in the struggle towards bureaucratic corruption. It is only a beginning since the teeth that CBI gets because of this judgment is against procedural corruption though we have still not found a way to control the moral corruption the bureaucrats extort.

To assert my point I would like to bring forth definition of corruption from Oxford that clearly states moral corruption as “moral deterioration or decay, perversion or destruction of integrity in the discharge of public duties”. Going further and understanding it deeper we see in a bureaucrats behavior a reflection and violation of obligations of fairness towards individuals and citizenry. The most pertinent being the misuse of power vested in them by the state for personal gains or exploitation of individuals.  This misuse of power can be construed and seen in instances where the bureaucrats wage a war against the citizens of the country and hiding behind the veil of government which can clearly be seen as the country waging a war against its citizens.

The hard work done needs to be applauded though the efforts need to be continued wherein we need to build an appreciation to the fact that corruption is as well a problem of social justice. We have had limited view to the idea of corruption wherein we have seen the same as an economic problem and problem of development. The ignorance of the aspect of social justice has made us see gross erosion of social trust in the country towards its institutions, headed by babus, as no respite is available if someone grossly misuses the same. The view thus is that we clearly see unjust oppression of basic tenants or rights of the citizens, accusing them and the bureaucracy coming to conclusions within their febrile imaginations that are not thought through, embedded in reality or quite likely have been taken to get even with people on whom they exert influence. The inherent problem here is that the accused citizen is subjected to prove his innocence and not rather the accuser, in this case bureaucracy, to prove the crime.

The move forward has to be wherein we build systems where exerting of individual power is restricted and any misuse seen and proven should see direct termination of the services of the individual i.e., bureaucrat. We could look at this from the perspective or portrait of a morally corrupt bureaucrats at levels of directors, advisors or joint secretaries though this would be a subject of another article.

At the moment what we need to do is that we need to continue the effort that Dr Subramanian Swamy has started and find ways to dismantle the institutions of moral corruption that the bureaucrats have built in this country.

Published with Business Standard dated May 12, 2014.