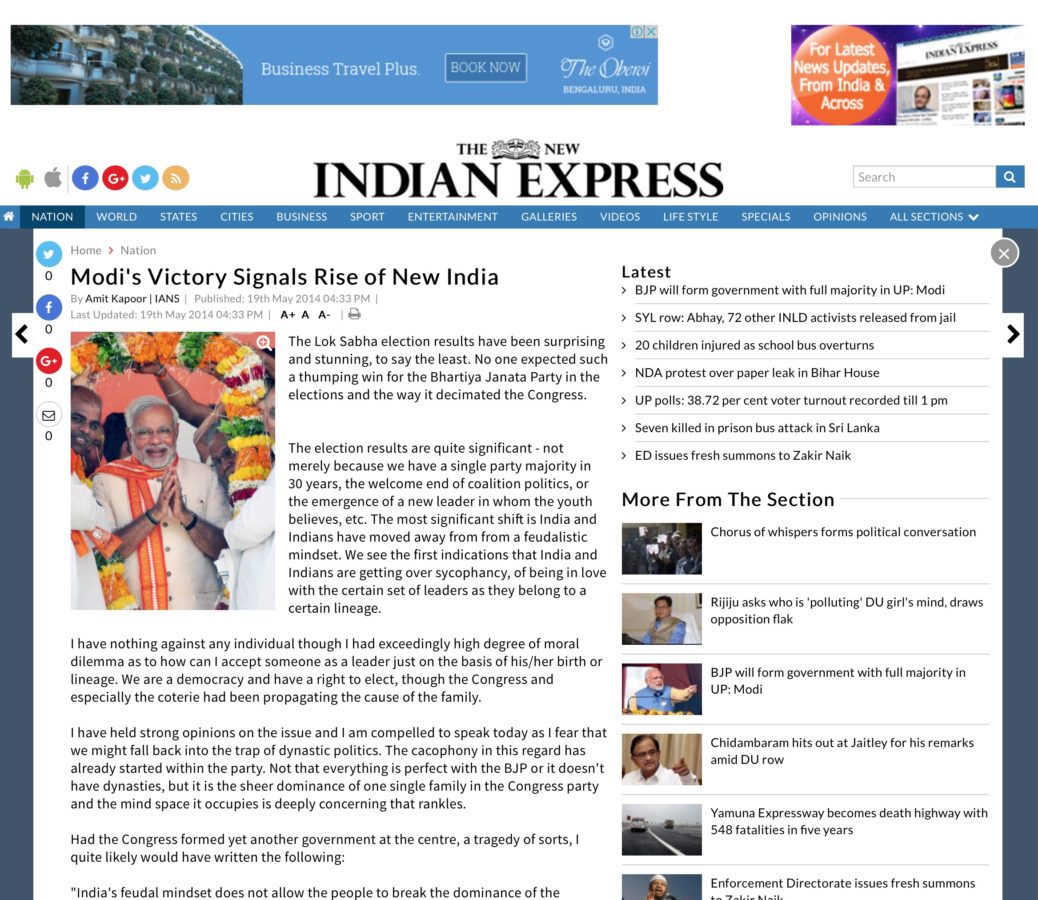 The Lok Sabha election results have been surprising and stunning, to say the least. No one expected such a thumping win for the Bhartiya Janata Party in the elections and the way it decimated the Congress.

The election results are quite significant – not merely because we have a single party majority in 30 years, the welcome end of coalition politics, or the emergence of a new leader in whom the youth believes, etc. The most significant shift is India and Indians have moved away from from a feudalistic mindset. We see the first indications that India and Indians are getting over sycophancy, of being in love with the certain set of leaders as they belong to a certain lineage.

I have nothing against any individual though I had exceedingly high degree of moral dilemma as to how can I accept someone as a leader just on the basis of his/her birth or lineage. We are a democracy and have a right to elect, though the Congress and especially the coterie had been propagating the cause of the family.

I have held strong opinions on the issue and I am compelled to speak today as I fear that we might fall back into the trap of dynastic politics. The cacophony in this regard has already started within the party. Not that everything is perfect with the BJP or it doesn’t have dynasties, but it is the sheer dominance of one single family in the Congress party and the mind space it occupies is deeply concerning that rankles.

Had the Congress formed yet another government at the centre, a tragedy of sorts, I quite likely would have written the following:

“India’s feudal mindset does not allow the people to break the dominance of the existing political parties. Families have hijacked the democracy that India had set out to be, and they have tried to establish monarchical dominion in the nation.

“The cognitive handicap has been fully exploited by the political families, which have made the political environment of India their private corporation. Independent India is a democracy where the people choose a government by the people, for the people and of the people. The makers of the constitution trusted the Indian citizens to vote for the right candidate who would, in turn, elect the appropriate prime minister. However, soon the political parties turned the public domain into a private battle with families vying for votes as market shares.

“The political parties were once constituted of statesmen and the elite who could think objectively for their country and run the government efficiently. However, soon the parties were taken over by one family member after another, and now it has become their private domain where no other deserving or undeserving candidate is allowed to step up as a candidate for heading the government at the level of a state or the nation. Democracy lies in shambles as the government has suddenly transformed into a government by the family. In the blind faith and trust that we put in the families (fiefdoms and kingdoms), India was prepared to accept the notion that son of a ruler is a ruler”.

The opinion and conviction against feudalistic mindset has developed over a period of time though it peaked when we saw the destruction of our institutions in the past ten years. The most painful was that the Prime Minister’s Office was relegated to being an information centre with limited ability to act or contribute. As The Economist has said in one famous article, Prime Minister Manmohan Singh was a Gandhi family retainer. People wouldn’t have liked it because it was probably an abject reflection of the reality. To say the least, the family took away in many ways one’s pride of being an Indian.

If someone disagrees about the status of the Prime Minister’s Office, I would request them to get back to Sanjaya Baru’s book about the stark power and dominance of the family.

There is a paradigm shift from the feudalistic mindset and we need to appreciate the emergence of Narendra Modi for this. Anyone can get up and demean Modi, but we cannot forget the service he has done to the nation by fighting the election the way he did. For the first time we see that people are willing to shun the family and break up political dynasties. This is important as henceforth politicians would have to perform to remain in office or the citizenry would dump them for their non-performance.

Today I am proud to be an Indian as the people have taken first steps to move away from the clutches of feudalistic mindset. This is as well reflected in everyone’s talk about the performance of Narendra Modi and not about his caste or background. This seriously is the emergence of new India and we need to respect it.