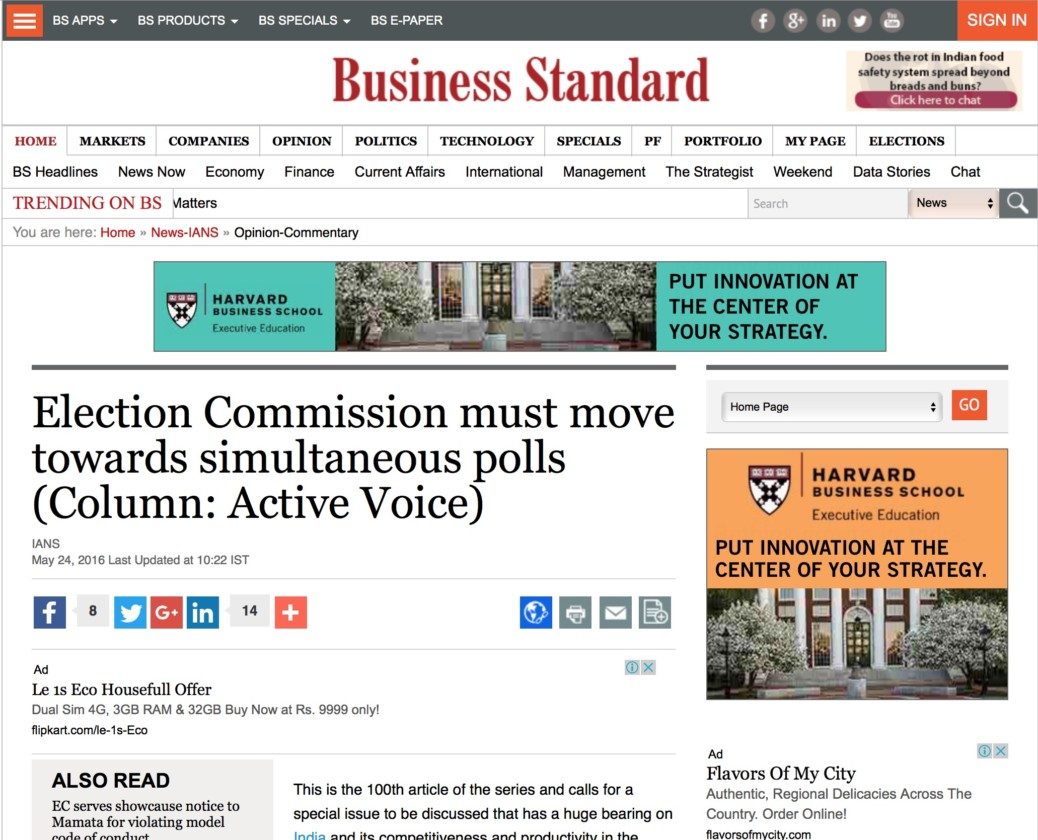 We are not talking about the just-concluded elections in four states and one union territory; the focus here is on a broader structural issue regarding the conduct of elections.

The question is not new and was raised by the Parliamentary Standing Committee on Personnel, Public Grievances, Law and Justice in its report tabled in December 2015. Prime Minister Narendrra Modi further raised the issue in March this year. The question pertains to the simultaneous conduct of elections and its impact on democratic functioning and governance.

Broadly speaking, there are two views on the issue. Most of the parties are in favour of such an arrangement and some are against it. The objections raised are mainly owing to the technical details like how can the elections be held simultaneously at present as many states are midway into polls and some of them will face problems to immediately homogenize to a timeline.

Also, Articles 83(2) and 172(1) make it clear that the term of the Lok Sabha and legislative assemblies cannot be extended beyond five years. Another negative is that in a hypothetical case, if the government at the Centre does not complete a term, why in such a case must the governments of the states be penalized? Another issue raised by some civil society members included the fact that such a design would give the candidate who has got an advantage at a particular time in electoral history an unfair advantage to rule for five years. These concerns are somewhat valid. But the positives seem to outweigh the costs.

Before moving on to the positives, it is important to understand the precedents of such a system. In India, according to the panel report, the first four elections to the Lok Sabha and the state assemblies happened simultaneously. Post this disruption in the pattern emerged due to the dissolution of some assemblies due to the vagaries of coalition politics that first appeared in India in the late 1960s.

This leads to asking a fundamental question on the benefits that accrue in case elections to the Lok Sabha and legislative assemblies take place simultaneously?

The positives include first and foremost stability in governance. This was even mentioned in the 117th report on Reform and Electoral Laws (1999) by the Law Commission of India. Second, it would reduce the massive expenditure that has been pegged at around Rs.4,500 crore.

Third, elections in states lead to the imposition of Model Code of Conduct (MCC). This puts on hold the entire development programme and activities in a poll-bound state. This is often seen to be interfering with the normal policy implementation and governance in the state.

Fourth, it also leads to an impact on the functioning of essential services. The rallies and the like do cause traffic problems as well as loss of productivity. Finally from a competitiveness and productivity viewpoint too, simultaneous elections are much better. This is because they would reduce the type of manpower and resource deployment necessary for the conduct of elections.

The caveat to this was mentioned by the Election Commission of India regarding resources required in the form of more Electronic Voting Machines (EVMs) and Voter Verifiable Paper Audit Trail (VVPAT). The Commission has pegged this cost at Rs.9,284.15 crore. The parliamentary committee report had, as a measure, put elections into two phases. However, this has not been followed at present in the latest round.

While the direction and intent to hold simultaneous elections is positive, it will take time before such normalization takes place. Over the next decade, the ECI must move in this direction so that productive resources and governance for people are ensured. This will also make the process more efficient and better and reduce losses due to time wastage and resource drain in the conduct of elections.