The Shrillness of Death 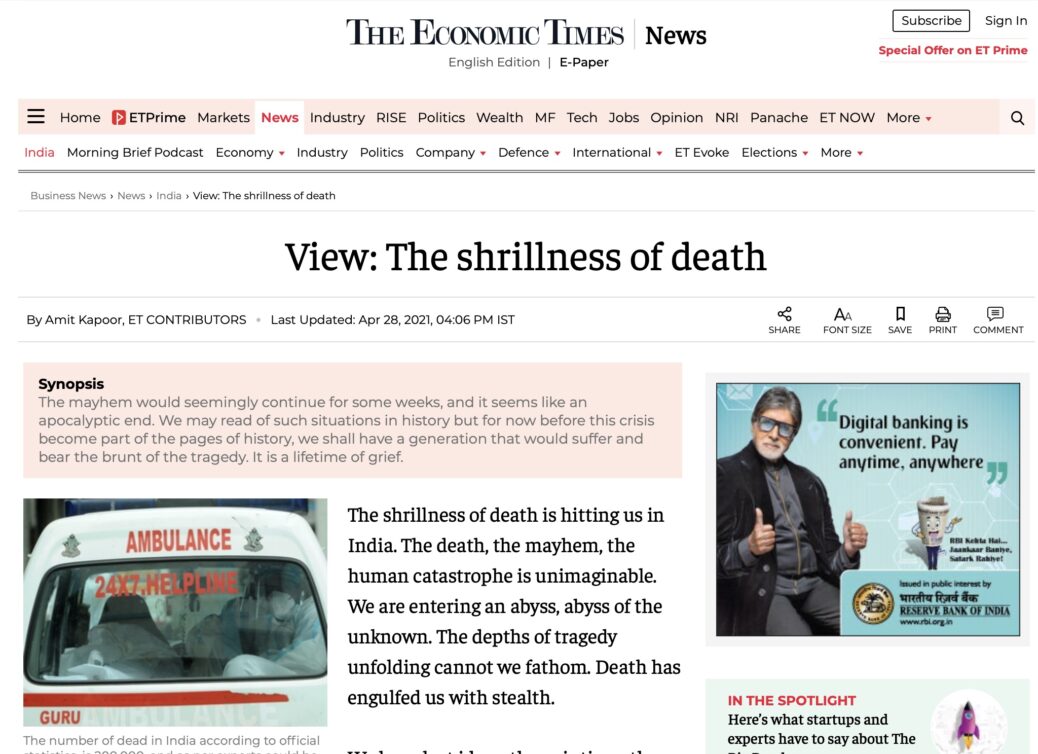 The Shrillness of Death

The shrillness of death is hitting us in India. The death, the mayhem, the human catastrophe is unimaginable. We are entering an abyss, abyss of the unknown. The depths of tragedy unfolding cannot we fathom. Death has engulfed us with stealth.

We have lost ideas, the paintings, the pictures, the music, the scientific discoveries that were to come from the minds who had a life ahead of them. The young died way too early, the people in their forties had immense potential to contribute, the old die without sharing their stories and wisdom. Most of them died without their loved ones around them, without someone able to hold their hand. What is the ordeal we are leaving for the parents of the young? The young suffer whilst losing their parents, years of education, the pleasure of living and seeing the beauty around them. The yawning learning gaps, the lost years, the enjoyment they deserved. The present crisis would push them back by years, if not decades. The situation makes me distraught. I am certain we can’t be heartless enough to close our eyes.

We are burying or lighting the pyres of our loved ones in body bags. We have been devoid of the chance to see their faces one last time. The chance to say I love you, chance to say I care. The pain of someone going without someone saying goodbye is a lifetime of sorrow. Death needs to be dignified. We need our last conversations. The pandemic will devoid families of the last conversation. The closure would not happen. It would be a lifetime of grief, remembrance, and so many achievements that could have been.

When we struggle to get a bed in a hospital for an acquaintance, for a loved one, for a friend, we are being stripped of all dignity.

Die we must, as this is the law of nature. The journey is to end, but this is not the end we deserve or desire. We live for the present world and let us accept the only time to be alive and be part of this beautiful world is now.

We don’t know how many of us would have to go through this ordeal. Without a doubt, the crisis has touched each one of us. We have lost a friend, a family member, our heroes, people we respect. The tragedy of epic proportions will be with us for a lifetime. The economic and emotional costs would be unimaginable. The grief is unsurmountable. Dying alone is an ordeal, but the grief is for the living.

The questions in my mind are numbing me. Beyond comprehension is the scale of pain I bear. Would we have lost these lives in vain? What did we need to do as a country? What is it that we desired to build? Was it to build infrastructure, to build hospitals, to build schools? Will this crisis give rise to a new India? Will we change or go back to the same way of being? Will it be about accepting failures in our stride and not seeking a better life? Will we demand more from our representatives? We need to ask as to how we got here, where did we go wrong, what has happened to us as a nation? What is it that the crisis is exposing about us? Is it about infrastructure failure? Implosion under our weight of wrong aspirations? Moral failure of we, the people of India?

We are seeing life being sucked out one breath at a time. It is about being breathless, the feeling of sinking in water. This is akin to a million George Flyod’s. We have blood on our hands. Only the state, the Government, the bureaucracy cannot be blamed. It is the way we seek answers, seek rights and the moral compass we subsume within ourselves. It is a collective failure. What I see is that we are dying a collective death, decaying into oblivion. It is about the death of being, death of morality and death of an idea of what we want India to be. This is not the will or wrath of the Gods. This is what we have got unto ourselves. It is collective failure of institutions, its leaders, we, the people and most of all the choices we made. Blaming the political party, our bureaucrats would be easy. We would need to accept our follies as citizens as we elected our representatives; we accepted the system we have. We would need to ask ourselves did we ever ask the right questions, sought the proper solutions, especially when we had time on our hands?

We need to wake up as a collective from our slumber. Let this not be a death of an idea. An idea called India. We need to change our paradigms. We have unto ourselves to build a better India, a better state, a better nation. Regardless, we need a new manifesto as a country. A manifesto that is just and humane.

The question we must answer is “Do I want an India that is embedded in the past or a country that is seeking a future. Seeking a future for our next generations”. History would possibly judge us a generation that failed itself. Failed to act. Failed to build a new India. We need to give an answer to our conscience as to what is the India of my dreams. An India that can live a life of dignity and present it to its people.

This dance of death, with the boundaries of caste, race, religion, inequality, makes us realize we are the same, going through the same ordeal.

This is possibly the worst crisis we have faced as an Indian civilization. The number of dead according to official statistics, is 200,000, and as per experts it could be close to a million. The mayhem would seemingly continue for some weeks, and it seems like an apocalyptic end. We may read of such situations in history but for now before this crisis become part of the pages of history, we shall have a generation that would suffer and bear the brunt of the tragedy. It is a lifetime of grief.

India is breathless as we failed to focus on the right things. We were focusing on the relic of the past, the past that is in history books and maybe mythical. We should learn from history rather than living a life embedded in the past. What we need is to create a future, a country that we are proud of and present a glorious future for generations to come.

This is not about free speech but about a heart cringing at the plight of people, at death and despair around that I see in all corners of my country. It is a catastrophic failure but now we must fight, end the political slugfest, depict the real picture and unite as a nation in its time of pain and agony. History will judge us as a society as how we lived to see another day. Rebuilding would be a collective effort. An effort that would require us to redefine, restructure and rebuild. We would have to find courage to get out of the crisis, every ounce of strength from our being and our souls.

What would the epitaphs say? My parents, my siblings, my progeny died because as a collective, as a nation, we did not demand the right things, things that mattered; we were entrenched in fighting pity battles, battles around border, religion, caste, race and history. We can’t let the crisis we face as a nation in vain. It is time that we change now. In the end, what matters is life. Now is the time to talk about life.

The article was published with Economic Times on April 28, 2021.

Dedicate the piece to my uncle Kuldeep Prakash, we lost him to Covid, who I respected, loved, learnt a lot from and had great conversations over the years. Will miss you uncle. Rest in peace).