Raising the Curtain: Media Industry and the Changing Landscape 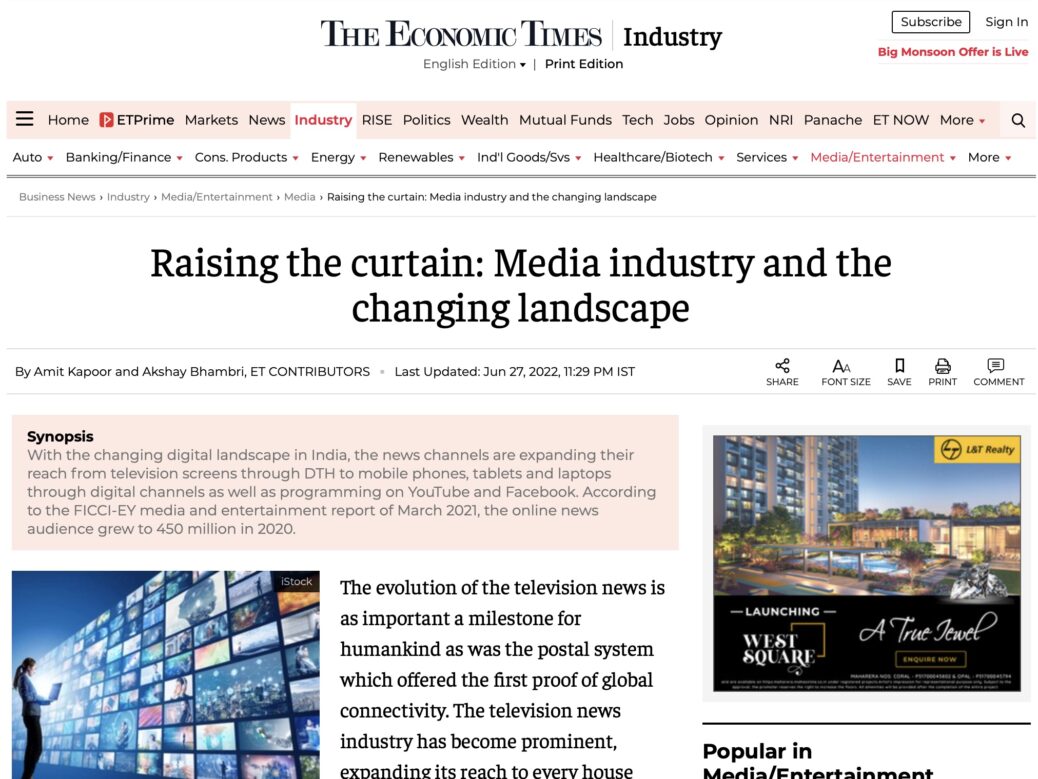 One of the most critical components of the television news industry is advertisements. Even though the “buyers” within the industry are constituted by the viewers or audience of these news channels, the contestation between these news channels remains to pull more audiences to attract more advertisements to generate revenues. Recently, with the proliferation of the media industry around the country, drawing more advertisements at high prices has taken the front seat in the industry. According to TAM AdEX, in 2020 the news genre led with a 31% share of ad volumes followed by the General Entertainment Channels (GEC) genre with a 27% share. Hindi news remained the second-best language genre for ad volumes and grew its share of ad volumes to 6%.  Therefore, high viewership becomes important to attract more advertisements as media agencies and advertisers look for viewership data and broad trends when they buy commercial time on news channels. However, it has been argued that the viewership data is not the defining force behind the advertisement revenue, and the pricing is dependent on other factors such as channel brand, quality, distributor demand and reputation built over the years. Nonetheless, viewership data remain an essential component in determining the advertisement.

With the changing digital landscape in India, the news channels are expanding their reach from Television screens through DTH to mobile phones, tablets and laptops through digital channels as well as programming on YouTube and Facebook. News channels have not only made live streaming of their channels available on OTTs and YouTube but now exclusive online channels and exclusive content are also made available to the digital audience. According to the FICCI-EY media and entertainment report of March 2021, the online news audience grew to 450 million in 2020. India has the second-largest digital population in the world at 468 million and time spent online increased by 32% in 2020. In 2020, online news had the widest reach with 454 million users across mobile and desktop users of news sites, portals and aggregators in comparison to 450 million online entertainment users. Additionally, in 2020 online news and magazine app downloads increased by 12%, signifying a shift from newspapers and television as sources of news to digital platforms.

The article was published with Economic Times on June 27, 2022.