The Economic Argument for Kashmir 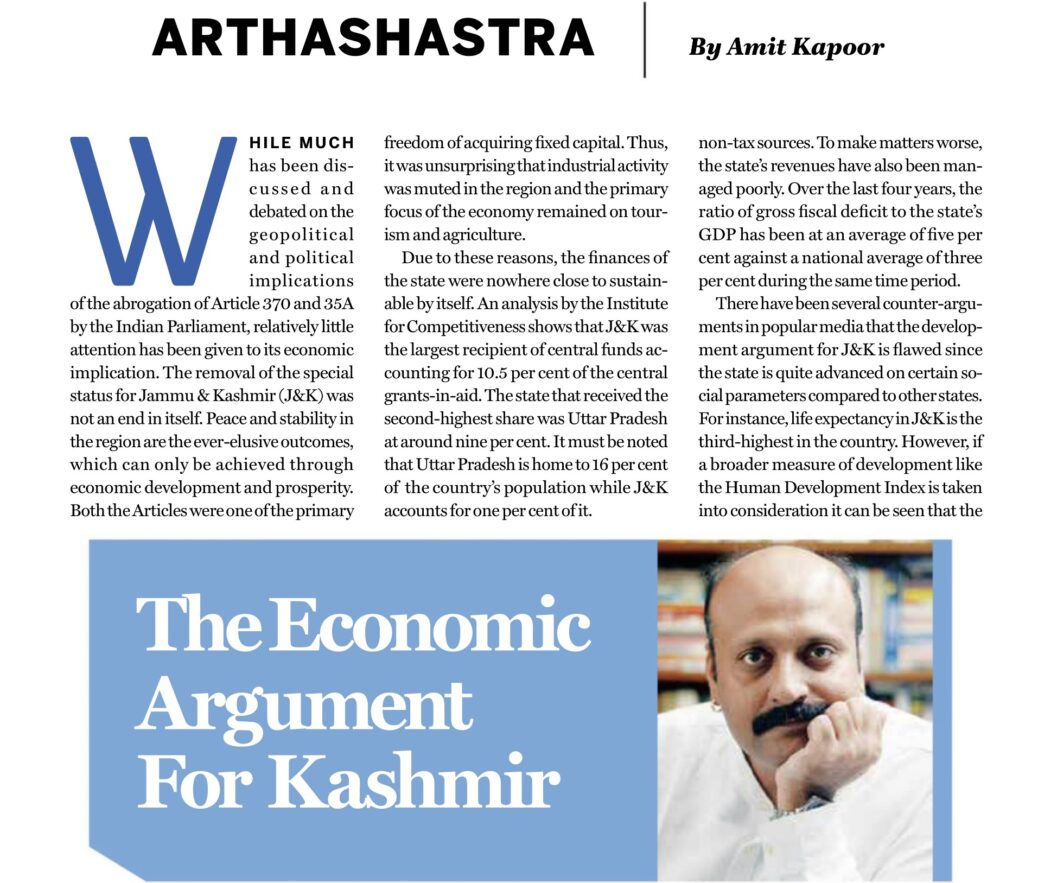 The Economic Argument for Kashmir

While much has been discussed and debated on the geopolitical and political implications of the abrogation of Article 370 and 35A by the Indian Parliament, relatively little attention has been given to its economic implication. The removal of the special status for Jammu & Kashmir (J&K) was not an end in itself. Peace and stability in the region are the ever-elusive outcomes, which can only be achieved through economic development and prosperity. Both the Articles were one of the primary impediments in the achievement of the latter.

With their revocation J&K has been integrated into the Indian mainland, which has brought uniformity in the policies of both regions. Earlier, laws passed by the Indian Parliament were beyond the purview of the state except in areas of defence, external affairs and communication. All other laws had to be ratified separately by the state legislature, which caused immense delays in decision-making.

Further, Article 35A worsened economic inefficiencies by preventing non-residents from purchasing land in the region. The law practically turned J&K into a closed economy in various aspects robbing businesses of the basic economic freedom of acquiring fixed capital. Thus, it was unsurprising that industrial activity was muted in the region and the primary focus of the economy remained on tourism and agriculture.

Due to these reasons, the finances of the state were nowhere close to sustainable by itself. An analysis by the Institute for Competitiveness shows that J&K was the largest recipient of central funds accounting for 10.5 percent of the central grants-in-aid. The state that received the second-highest share was Uttar Pradesh at around 9 percent. It must be noted that Uttar Pradesh is home to 16 percent of the country’s population while J&K accounts for 1 percent of it.

The self-dependency of the state’s finances has also been impaired by its limited capacity to generate own revenue. The latest Budget figures of J&K show that 53 percent of its revenue were derived from the central grants-in-aid. When central taxes are also taken into account, the figure rises to above 70 percent.

The state does not even have the capacity to raise 30 percent of its own revenues is driven by the fact that the region lacks economic exuberance. Since the state is primarily a traditional economy with industrial activity being virtually non-existent, the government cannot generate revenue through tax or non-tax sources. To make matters worse, the state’s revenues have also been managed poorly. Over the last four years, the ratio of gross fiscal deficit to the state’s GDP has been at an average of 5 percent against a national average of 3 percent during the same time period.

There have been several counterarguments in popular media which have argued that the development argument for J&K is flawed since the state is quite advanced on certain social parameters compared to other states. For instance, life expectancy in J&K is the third-highest in the country. However, if a broader measure of development like the Human Development Index is taken into consideration it can be seen the state has worsened its rankings from 9 to 11 between 1990 and 2017 and its current score is closer to the national average. Thus, its performance on the social front is also average at best.

It must be said that more central control over J&K is certainly no panacea and there will be challenges. But with the removal of legal impediments will allow free flow of people an easier access to assets like land, which will enhance entrepreneurial activity within the state and allow industrial growth. This will open up avenues of economic opportunities for Kashmir and her people who have long been denied of the same.