India’s Policy Impact Challenge: Why it exists, and how to overcome it 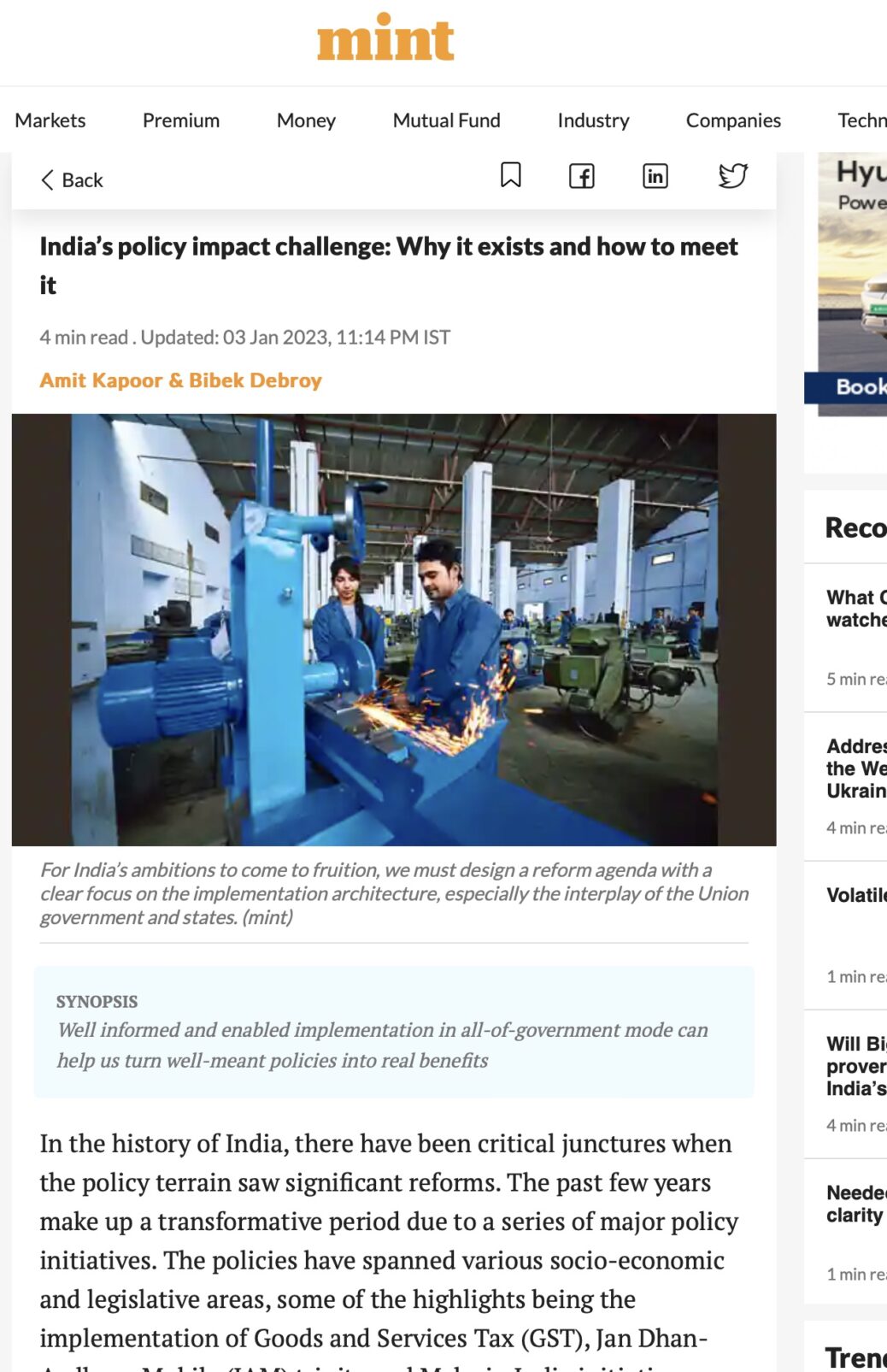 In the history of India, there have been critical junctures when the policy terrain saw significant reforms. The past few years make up a transformative period due to a series of major policy initiatives. The policies have spanned various socio-economic and legislative areas, some of the highlights being the implementation of Goods and Services Tax (GST), Jan Dhan-Aadhaar-Mobile (JAM) trinity, Make in India initiative, among others. The country witnessed reforms invigorating entrepreneurship, streamlining regulatory processes, and even reimagining the education system through the National Education Policy. These initiatives have been driven by certain overarching goals such as self-sufficiency, inclusivity in growth, and maximizing good governance. A range of measures has led to landmark achievements on various economic parameters. While inclusivity has been a key feature of these policy reforms, there still is scope for the benefits to reach far and wide across segments of the population. According to the Periodic Labour Force Survey for the years 2017-18, 2018-19, and 2019-20, earnings of the top 10% approximately equal that of the bottom 64%. India’s efforts toward creating shared prosperity must take into account the importance of having an efficient policy implementation architecture. It is important to dig deeper into the question – why do some reforms have a greater impact than others? The discussion around this question must keep policy implementation a central point. While it takes time for reforms to fully manifest their impact, the impact in the future depends on the policy implementation in the present. A policy rehaul is complete only when it reflects in the form of an improvement in implementation as well.

In order to correctly assess the policy challenges that the country faces, especially at the implementation level, one must build a thorough understanding of our past policy choices that play a significant role in explaining the emergence of today’s India. In the post-independence period, India pursued economic policies limited the operations of private business to the domestic sphere, regulated labor markets, nationalized banks. At the same time, there was a focus on social policies, the “green revolution” in agriculture, and investments in capital-intensive industries. After the 1991 reforms, the economy opened its doors to the global market. There was a removal of barriers on products and service markets. However, a singular focus on opening up markets provides incentives for growth and productivity enhancement for those able to compete, but it might discourage those not able due to a lack of investment in enhancing their capabilities. The period post-2014 has seen a major push in the skill enhancement and ease of doing business spheres, along with a further opening up of the domestic markets. A policy implemented in one period has a continuing effect that shapes the terrain for the next phase of reforms. Policy reforms shape outcomes for firms and individuals over time. The implementation of the reforms of today will shape millions of trajectories of both people and businesses, and of society at large.

Effective execution of policies requires the effective engagement of all stakeholders involved in bringing the measures to the ground. It is an oft-repeated statement that India’s policy impact challenge can be better addressed through greater coordination and coherence across the multiple tiers of government machinery. However, the imperative of getting into the nitty gritty of this statement, and investigating ways to make the engagement of all stakeholders in charge of policy execution work, cannot be overstated.  For India’s ambitions to come to fruition, the country needs to design a reform agenda with a clear focus on implementation architecture especially the interplay of Union Government and States. There must be a greater focus on how policies play out at the ground level for which the dialogue between the states and the union government, and even within and among states, warrants attention. Additionally, as highlighted by the Competitiveness Roadmap @ 100 – a collaborative endeavour between the EAC-PM and The Institute for Competitiveness – the operational drivers of a certain policy may fall within the ambit of one part of the government, but its impact on the government’s larger goals such as job creation ultimately depends on complementary policy actions undertaken by other parts of the government as well. A dialogue on improving policy implementation must use an all-of-government approach.

India is putting policy implementation to the fore, as can be seen in the recently announced National Logistics Policy. Along with the launch of the policy, significant initiatives including the Unified Logistics Interface Platform (ULIP), the Ease of Logistics Services platform, the e-handbook on Warehousing, and training courses on PM GatiShakti were launched, to ensure that the action agenda for its on-ground implementation reaches people. This goes to show the fact that the significance of on-ground policy implementation has gained greater emphasis. An informed and enabled implementation across different parts of the government will translate well-meant policies into real benefits even more.

The article was published with Mint on January 4, 2022.