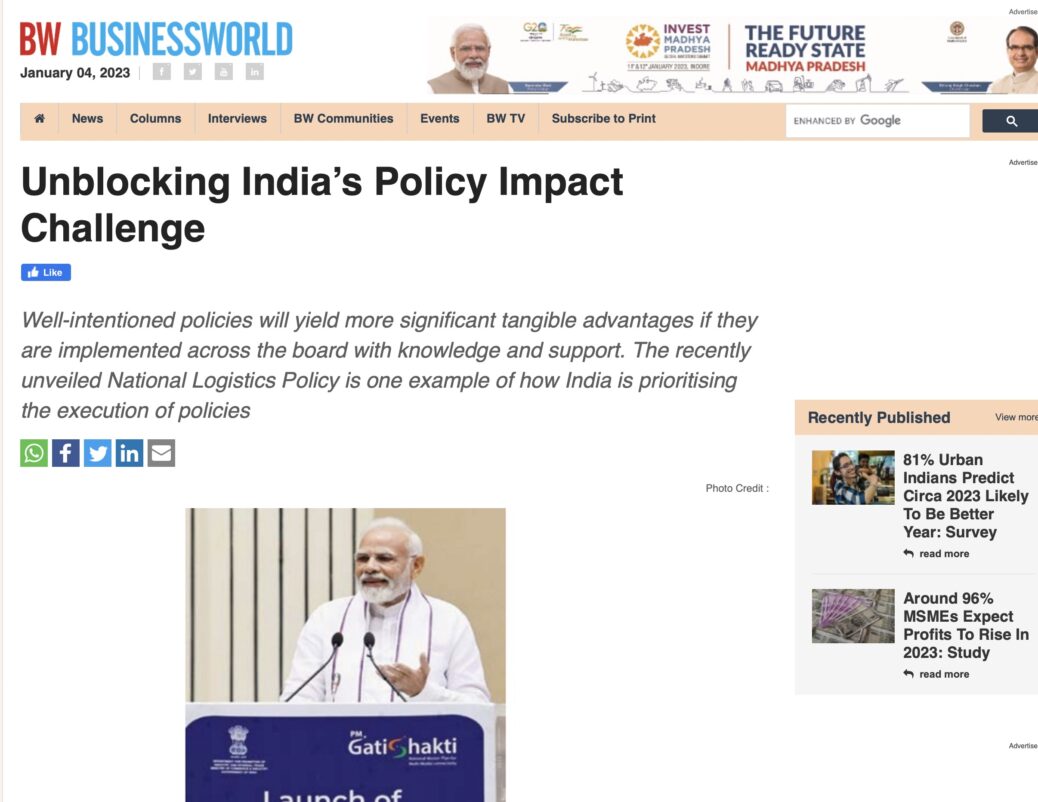 India’s economic history is rich with instances of policy interventions which transformed the country’s economic and political terrain. The last few years, especially, have seen a wide range of ambitious policy initiatives. Since 2014, India has launched significant initiatives like the implementation of the Goods and Services Tax (GST), JAM Trinity (Jan Dhan-Aadhaar-Mobile), and the Make in India initiative. Prime Minister Modi and his Cabinet have set out to energise entrepreneurship, modernise the regulatory processes, and prepare the education system to meet the demands of the future. Moreover, self-sufficiency, inclusivity in growth, and maximising good governance are just a few of the objectives that have been put high on the policy agenda.

India has seen significant improvements in several economic indicators over this period. But while for example inclusion has been a crucial ambition, there is agreement that the gains of economic growth need to drive prosperity gains more widely across the population. The State of Inequality Report 2022 states that the top 10% of earners make roughly the same amount as the lowest 64% of earners.

India must take a hard look of why there remains this gap between outcomes and ambitions, even where the political objectives are so clear. This analysis leads to the critical role of an effective architecture for implementing policy. Implementation of policies must remain a focal feature of the conversation surrounding this issue. Reforms take time to take effect entirely, but how well they are implemented now will determine how they affect society in the future. A policy revision is only complete when it results in improved implementation as well.

How has India’s policy implementation challenge changed over time, and why is it so central now? It is instructive to look back at our past policy decisions, which were crucial in explaining how today’s India emerged, in order to accurately appraise the policy issues the nation faces, particularly at the implementation level.

The reforms of 1991 made the Indian economy more accessible to the world market as the barriers to the marketplaces for goods and services were removed. This was political challenging. But from an implementation perspective it was relatively straight forward: it required some key policy changes at the national level, but given that it was about the removal of barriers relatively little else. India began to draw on its existing competitive advantages. However, only concentrating on expanding markets encourages growth and increases productivity for those who can compete. It offered much less to those firms, regions, an workers who were unable to compete, owing to a lack of investment in improving their capabilities.

Following 2014, there has been a significant push to not only leverage India’s competitive advantages but to build new assets and capabilities. The focus on talent development, infrastructure upgrading, investment attraction and reducing the costs of doing business were all about creating new competitive advantages. At the same time, policy also aimed to open up more markets, especially domestically, to allow capital and talent to flow to their most productive uses.

From an implementation perspective, this new policy agenda raised significantly more complex challenges. Policy decisions at the national level can set the direction and provide resources, but the implementation happens in specific locations and sectors. The effectiveness of implementation thus rests on the engagement and decisions of many different levels of government, as well as partners in the business community and other entities. This is both technically complex – how to ensure decisions are made in a consistent way – and politically demanding – how to ensure that individual interests are align to achieve coherent collective action.

What are the lessons from this analysis? First, the implementation challenge is not a sign of policy failure. It is a natural consequence of the new stage that India has reached in its development. Further gains in competitiveness are structurally more demanding than those in the past. And they will only be achieved if the policy design and execution mechanisms are developed in line with these new demands.

Second, all parties involved in implementing the measures must be fully engaged for policies to be executed effectively. Improved coordination and coherence across the various levels of the political system are needed, and will not simply be achieved by appealing on changes in individual behavior. India must create a reform programme with a clear focus on implementation architecture, notably the interaction of the Union Government and States. The decision making structures between the states and the federal government, as well as within and among states, merit attention since there has to be a stronger emphasis on how policies are implemented on the ground. Furthermore, although the operational motivations behind a given policy may fall under the purview of one branch of the government, its impact on the latter’s more overarching objectives, such as job creation, ultimately depends on complementary policy actions taken by other branches of the government.

In the Competitiveness Roadmap for India @ 100, a joint project between the EAC-PM and The Institute for Competitiveness, a team of Harvard Business School scholars has laid out a number of concrete ideas for strengthening India’s implementation architecture. One focus is the strengthening of collaborative federalism in India, with better alignment in the roles and responsibilities of the Union government and the State governments. There is also a focus on creating a more robust governance structure at the level of metropolitan areas and sub-state regions, an area where India lags behind the vision of the Indian constitution. A third priority is the better coordination across the many ministries and functional agencies that exist at the national level. While the current structure allows for specialized knowledge to be applied to specific problems, it creates the danger of fragmented and siloed policy actions.

Another focus is the strengthing of public-private collaboration to enhance India’s competitiveness. Location- and sector-specific action needs to be informed by the intimate knowledge of market conditions and opportunities that only companies possess. At the same time these collaboration structures must be robustly focused on generating value for India, rather than simply private benefits.

Well-intentioned policies will yield more significant tangible advantages if they are implemented across the board with knowledge and support. The recently unveiled National Logistics Policy is one example of how India is prioritising the execution of policies. To ensure that the action agenda for the policy’s on-the-ground implementation reaches people, significant initiatives such as the Unified Logistics Interface Platform (ULIP), the Ease of Logistics Services platform, the e-handbook on Warehousing, and training courses on PM GatiShakti were also launched. This demonstrates how on-the-ground policy execution has become increasingly important.  To this end, synergies between the public and private sector as well as within the different departments of the government can be emphasised. The policy mechanisms of initiatives like the National Logistics Policy can be better harnessed by drawing on the insights that private sector might have to offer in various areas including utilising technology effectively and smoothly for efficient policy implementation. At the same time, this public-private partnership also leads to equipping the private sector to understand the needs and the issues facing the larger public.

The article was published with Business World on January 4, 2022.