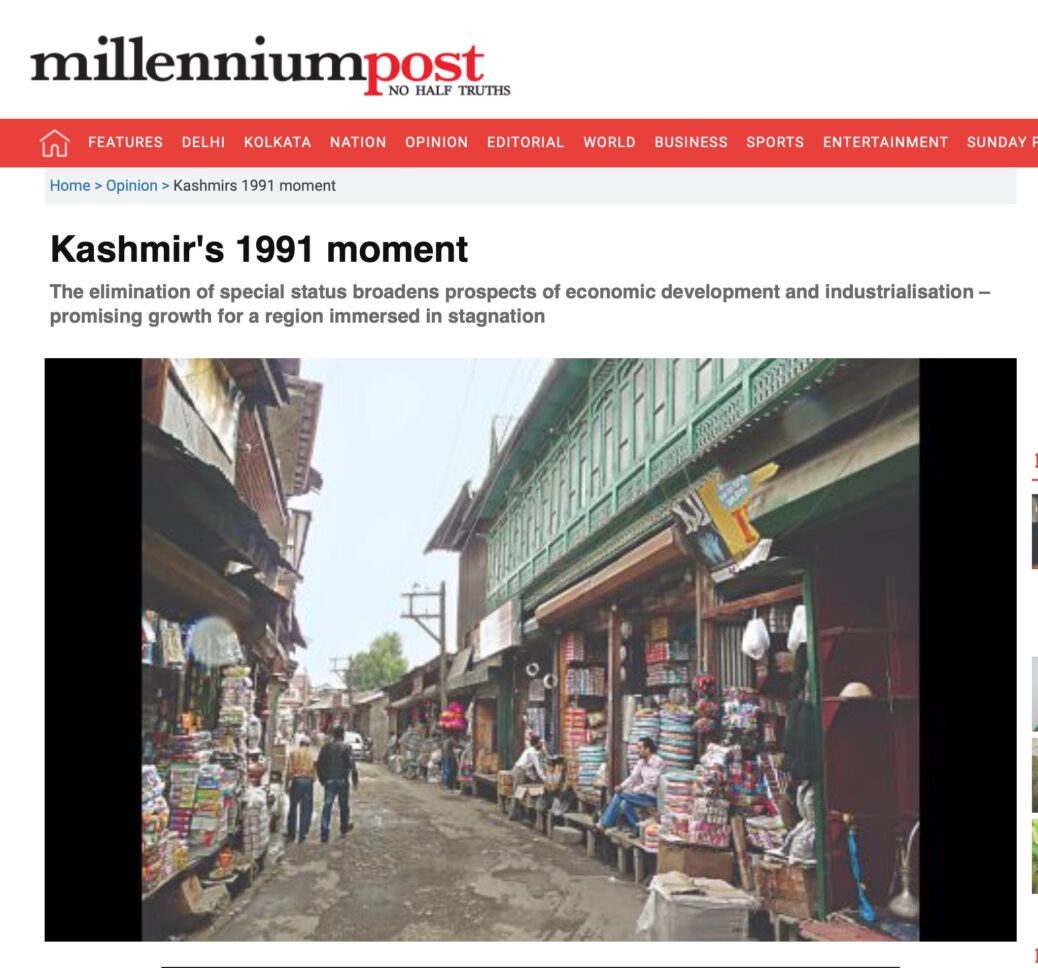 The special status of Jammu &amp; Kashmir has been revoked and the state has been bifurcated into two Union Territories. Those are the facts. Much has been discussed and debated over these decisions. But it is time to consider its future implications now. Altering the long-held governance structure was just the beginning to resolving the long-standing Kashmir problem. The real uphill task remains. How do these steps result in the development of Jammu &amp; Kashmir and bring it closer to achieving peace and stability? That is the crux of the matter; the end goal.

A key enabler of these outcomes can be the achievement of higher economic growth and development of the region. The integration of Jammu &amp; Kashmir to the Indian mainland brings uniformity to the economic policies of both regions. All laws applicable to other Indian states will now be applicable to it. This puts the region on a level playing field and allows faster percolation of decision making at the Centre down to the most granular level.

Earlier, laws passed by the Indian Parliament had to be separately ratified by the state legislature in Jammu &amp; Kashmir, which caused immense delays in implementation and the region suffered as a result. For instance, a week after other states joined the GST network, the government of Jammu and Kashmir had to pass its own resolution to integrate itself into the national tax framework. And this was a law in which the former state had an interest in clearing. The gestation periods are much longer for other acts. As the Prime Minister pointed out, the Right to Education Act was still not applicable to Kashmiri students. Such limitations had impeded the decision-making process and prevented effective economic development.

The economic limitations were further exacerbated by Article 35A, which prevented non-residents from buying land in the region and availing facilities provided by the state government. When businesses could not acquire the most basic assets for setting up an enterprise, economic activity was bound to be muted. The very nature of legislation curbed economic development and, thus, eliminated all avenues of growth and prosperity that could have benefitted the Kashmiris themselves.

The extent of economic inefficiency that has existed until now with respect to Jammu &amp; Kashmir can be realised from the fact that the region was the largest recipient of central funds until now with little to show for it. An analysis by the Institute for Competitiveness shows that between 2005-06 till 2018-19, Jammu &amp; Kashmir received around 10.5 per cent of the central grants-in-aid, which was the highest among all states. The second-highest share of these central grants were received by the state of Uttar Pradesh at around 9 per cent. That these allocations are grossly disproportionate can be seen in the light of their population shares where Jammu &amp; Kashmir is home to 1 per cent of India”s population while Uttar Pradesh is the country”s most populous state accounting for over 16 per cent of its population.

Not only has Jammu &amp; Kashmir been the recipient of the highest share of central grants but is also heavily dependent on them as its own revenue-generating capacity has been fairly limited. In fact, more than half of the state”s revenue, or 53 per cent to be precise, are derived from the central grants-in-aid. If central taxes are taken into consideration, this share shoots above 70 percent.

Thus, its own capacity of generating revenue accounted for less than 30 per cent of its total revenue receipts. This is yet another reflection of the lack of economic exuberance within the region, which has stymied its government”s revenue-generating capacity through both tax and non-tax sources. Moreover, these funds have also not been managed well. Jammu &amp; Kashmir has had a history of improper financial management with the ratio of gross fiscal deficit to the state”s GDP at an average of 5 per cent over the last four years against a national average of 3 per cent for the same period.

There have, however, been recent discussions that the former state was already quite advanced on certain social parameters. Life expectancy, for instance, is the third highest among all Indian states at 73.5. But, if a broader measure is considered like the Human Development Index, the ranking of Jammu &amp; Kashmir has slipped two places from 9 to 11 between 1990 and 2017 with a current score of 0.68 that is quite close to the national average of 0.64. Thus, its performance has not been exceptional even on the social outcomes.

It must be admitted that there is no surety that after coming under central control Jammu &amp; Kashmir will perform better economically. But the opening up of the local economy to outside actors will be akin to India”s liberalisation moment of 1991 when it opened up its economy and integrated with the outside world. As the legal impediments to free movement of people and access to assets like land have been removed, the economic focus of the state can now be broadened beyond tourism and agriculture. Industrialisation can slowly expand its prominence in the local economy. Thus, the elimination of the special status and more centrality of governance should beget higher availability of economic opportunities and wider avenues of growth for the people for Kashmir who have been long denied of the same.

The article was published with Millennium Post and Outlook India on August 12, 2019.