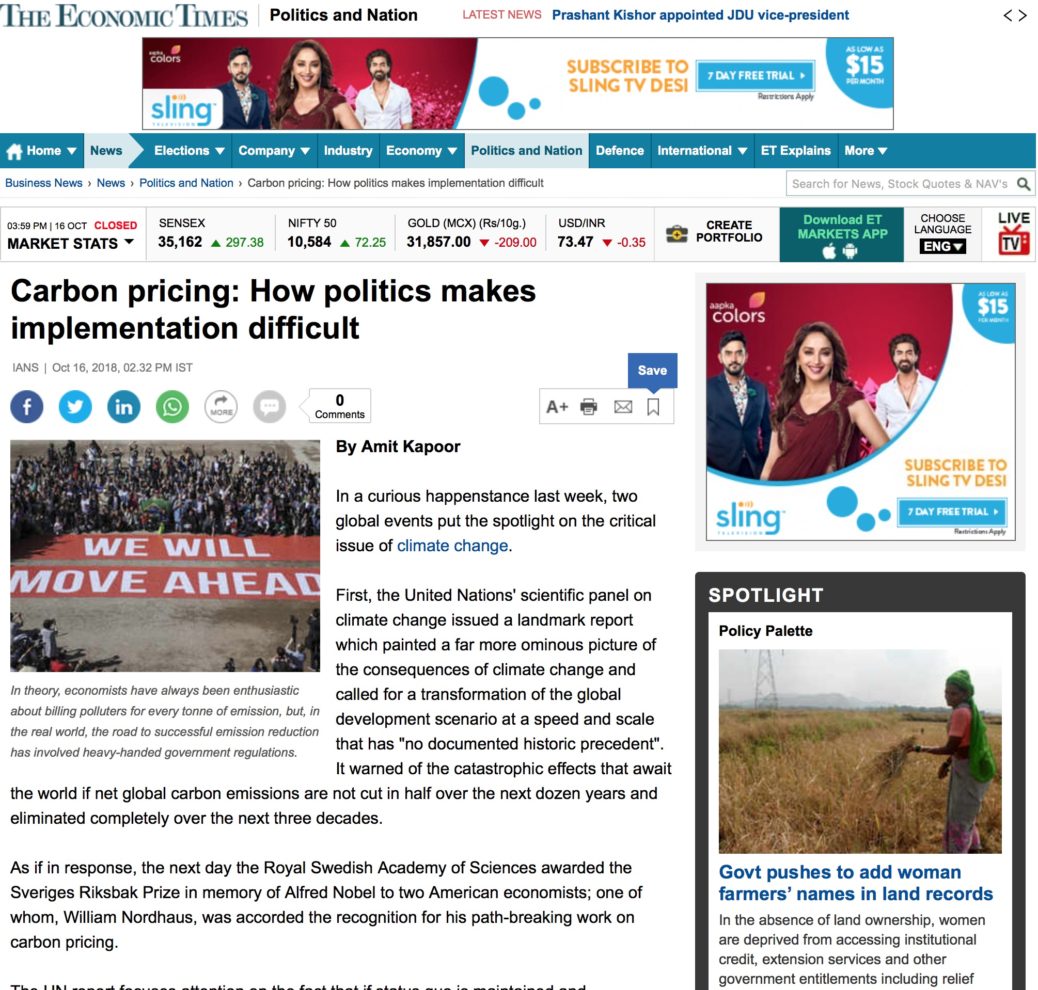 In a curious happenstance last week, two global events put the spotlight on the critical issue of climate change.

First, the United Nations’ scientific panel on climate change issued a landmark report which painted a far more ominous picture of the consequences of climate change and called for a transformation of the global development scenario at a speed and scale that has “no documented historic precedent”. It warned of the catastrophic effects that await the world if net global carbon emissions are not cut in half over the next dozen years and eliminated completely over the next three decades.

As if in response, the next day the Royal Swedish Academy of Sciences awarded the Sveriges Riksbak Prize in memory of Alfred Nobel to two American economists; one of whom, William Nordhaus, was accorded the recognition for his path-breaking work on carbon pricing.

The UN report focuses attention on the fact that if status quo is maintained and greenhouse gas emissions continue at the present rate, the world will warm up by 1.5 degree Celsius above preindustrial levels by 2040, inundating coastlines and intensifying droughts in the process. All the previous work had estimated the repercussions of climate change based on a higher temperature rise of 2 degree Celsius, which was considered to be the threshold for the most severe effects. Now, there is new evidence that these effects will be realised much sooner.

According to the report, despite the international community coming together to strengthen the global response to climate change, in the form of commitment to the Kyoto Protocol or the Paris Agreement, the scale and speed needed to stabilise global temperature at a safe level has not been achieved yet.

Nordhaus’ work has gained more relevance as it provides an answer to why heavy-handed regulations are unable to correct the market failure. By doing so, his research can guide policymakers on how to tackle climate change.

He has built on the work done in the 1920s by A.C. Pigou. His research points out that individuals, firms and countries have no incentive to reduce carbon consumption as climate is a global public good. This points towards a clear case of market failure where intervention is needed to restore efficiency and enhance public welfare. The interventions can be in the form of taxes or regulations.

His research shows that direct government regulations aimed at controlling the quantity of carbon emissions will be far less effective than putting a price on the use of fuels. This happens because, without an incentive, polluters will act as free-riders and not take into account the economic damage inflicted on the society due to their actions. Their failure to internalise these costs leads to emissions greater than the optimal level.

He argues that carbon pricing will be an effective policy measure, because when companies are made to pay the price for their fossil fuel consumption they will find cost-effective and innovative solutions for reducing them. The policy will incentivise them to invest and develop energy-saving technologies.

In theory, economists have always been enthusiastic about billing polluters for every tonne of emission they unleash, arguing that the polluters can choose their optimal response given the price. However, in the real world, the road to successful emission reduction has involved heavy-handed government regulations. This happens because of two reasons.

First, when governments put a price on carbon, either through a direct tax or through a cap-and-trade programme, they are unable to put a price that is significant enough to drive a reduction in carbon emission. For instance, the World Bank’s carbon pricing dashboard shows that there are 51 carbon pricing initiatives that are either implemented or scheduled for implementation across the world whose total value is $81.68 billion. But experts suggest that in most of the programmes the prices are too low to spur emission reductions or to inspire low-carbon investments.

Second, government regulations are a safer political bet as high taxes can face a political backlash. For instance, the Australian government’s plan of reducing emissions by using a cap-and-trade programme was successful, but it faced a backlash from industrial groups and voters. The party that came to power in the next elections repealed the programme.

So, theoretically, a higher price on the use of fuel is the solution, but political factors reduce the possibility of its implementation. If one thinks that public acceptability is a deterrent, then policymakers should focus on bridging the information gap that exists across citizens. They should also address the issue of allocation of revenue from carbon pricing, wherein the collection should be streamlined to cater to environmental concerns of the economy. This will enhance public acceptability and the ability of policymakers to implement carbon pricing.

The article was published with Outlook India, Economic Times and MoneyLife on October 16, 2018.