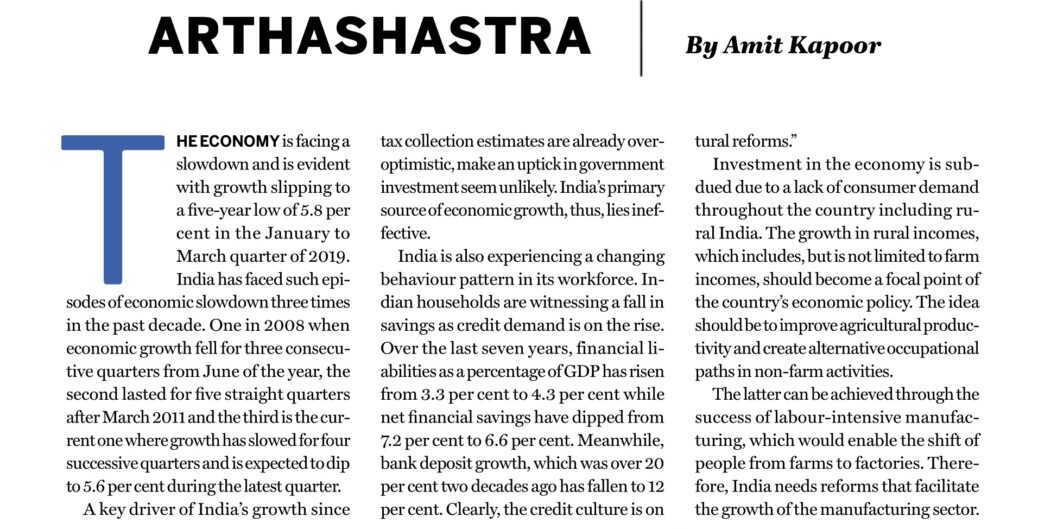 The economy is facing a slowdown and is evident with growth slipping to a five-year low of 5.8% in the January to March quarter of 2019. India has faced such episodes of economic slowdown three times in the past decade. One in 2008 when economic growth fell for three consecutive quarters from June of the year, second lasted for five straight quarters after March 2011 and third is the current one where growth has slowed for four successive quarters expected to dip to 5.6% during the latest quarter.

A key driver of India’s growth since the liberalisation of the economy in 1991 has been its investments. Recently, the investment in the economy has been unambiguously slowing, and as per CMIE data, new investment proposals have touched Rs 9.5 lakh crore, which is the lowest since 2004-05. On the other hand, the government is spending less, as evidenced by a 30 percent drop in capital expenditure for June 2019 quarter. While low consumer demand and a liquidity crunch on account of the crisis in the non-banking financial (NBFC) sector is constraining private investment, fiscal constraints limit the ability of the government to revive investment. The reduction of the fiscal deficit target by the government to 3.3 percent in a year when tax collection estimates are already over-optimistic make an uptick in government investment seem unlikely. India’s primary source of economic growth, thus, lies ineffective.

India is also experiencing a changing behavior pattern in its workforce. Indian households are witnessing a fall in savings as credit demand is on the rise. Over the last seven years, financial liabilities as a percentage of GDP has risen from 3.3% to 4.3% while net financial savings have dipped from 7.2% to 6.6%. Meanwhile, bank deposit growth, which was over 20% two decades ago has fallen to 12%. Clearly, the credit culture is on the rise and is impacting the level of savings. Despite growth in insurance, mutual fund investment and pension, the gross financial savings in the economy have remained constant at 10%. This is as well leaving less money for investments.

All of these trends point to the need for structural changes that cannot be substituted with minor policy tinkering. The Finance Minister has responded with measures that look at bank recapitalisation and withdrawal of the higher tax surcharge on FPIs and domestic investors, while welcome, need to be accompanied with stronger structural reforms. Investment in the economy is subdued due to a lack of consumer demand throughout the economy including rural India. The growth in rural incomes, which includes but is not limited to farm incomes, should become a focal point of the country’s economic policy. The idea should be to improve agricultural productivity and create alternative occupational paths in non-farm activities.

The latter can be achieved through the success of labour-intensive manufacturing, which would enable the shift of people from farms to factories. Therefore, India needs reforms that facilitate the growth of the manufacturing sector. While labour law reform is already underway, the act of reducing multiple laws into four codes should not be the end in itself. What needs to be changed is the content that has impeded Indian manufacturers from growing big until now as they feared the application of these laws. Further, structural shifts over the long run can be achieved through tapping into the health and education sectors that long for quality improvements. Only such long-lasting structural changes can improve the growth potential of the Indian economy and stall the possibility of another slowdown in the coming years.

The article was published with Business World in the issue dated August 31 to September 13, 2019.