Is Liberal Democracy Under Threat? 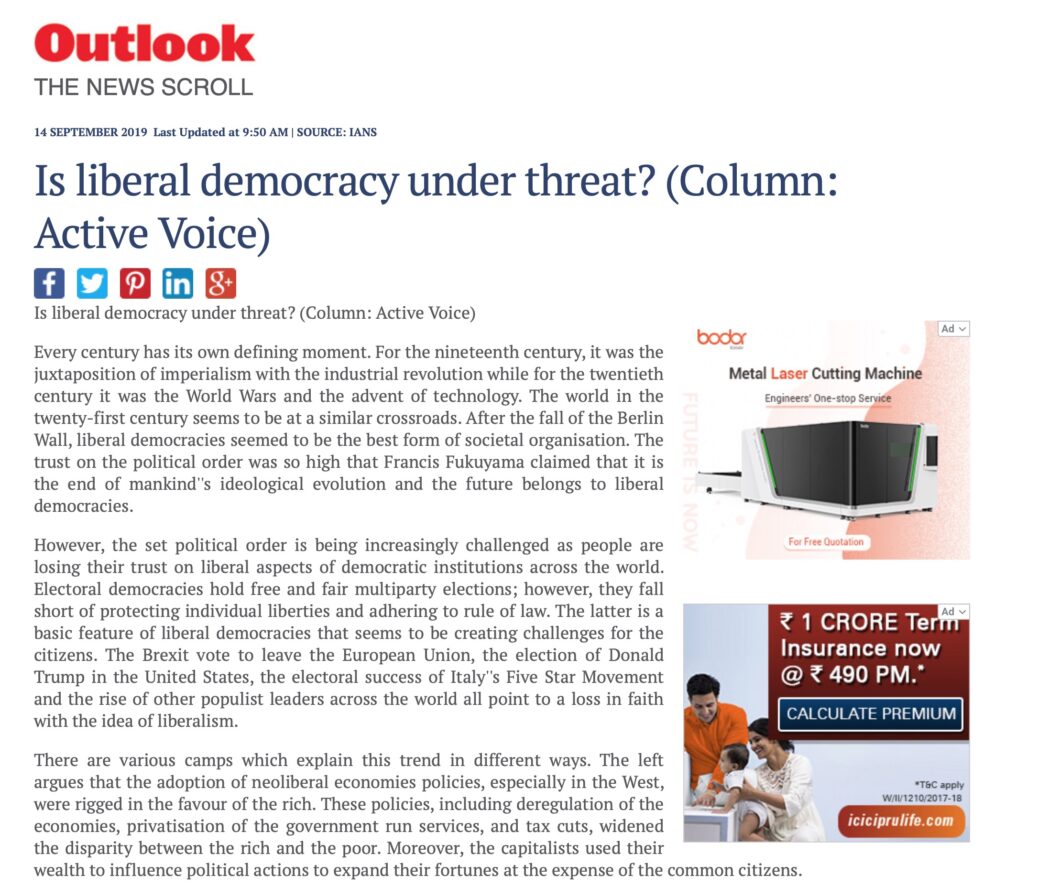 Is Liberal Democracy Under Threat?

Every century has its own defining moment. For the nineteenth century, it was the juxtaposition of imperialism with the industrial revolution while for the twentieth century it was the World Wars and the advent of technology. The world in the twenty-first century seems to be at a similar crossroads. After the fall of the Berlin Wall, liberal democracies seemed to be the best form of societal organisation. The trust on the political order was so high that Francis Fukuyama claimed that it is the end of mankind’s ideological evolution and the future belongs to liberal democracies.

However, the set political order is being increasingly challenged as people are losing their trust on liberal aspects of democratic institutions across the world. Electoral democracies hold free and fair multiparty elections; however, they fall short of protecting individual liberties and adhering to rule of law. The latter is a basic feature of liberal democracies that seems to be creating challenges for the citizens. The Brexit vote to leave the European Union, the election of Donald Trump in the United States, the electoral success of Italy’s Five Star Movement and the rise of other populist leaders across the world all point to a loss in faith with the idea of liberalism.

There are various camps which explain this trend in different ways. The left argues that the adoption of neoliberal economies policies, especially in the West, were rigged in the favour of the rich. These policies, including deregulation of the economies, privatisation of the government run services, and tax cuts, widened the disparity between the rich and the poor. Moreover, the capitalists used their wealth to influence political actions to expand their fortunes at the expense of the common citizens.

Meanwhile in the developing world, the corrupt politicians serve the interests of the large business organisations at the expense of the masses; again, adding to the already existing disparity. As Piketty has argued in his magnus opus, Capital in the Twenty First Century, the share of top income percentile in total income rose from 10 percent to 20 percent during the period 1970 – 2010 in the Anglo-Saxon countries. A similar trend has played out even in the developing world.

The rising disparities in the neoliberal world have been accentuated with the advent of globalisation. While a globalised, interconnected world has increased everyone’s wealth over time, it has not benefitted everyone equally. According to the Heckscher – Ohlin theorem, trade is beneficial mainly for people who own factors with which the national economy is relatively well endowed and hurts individuals who own factors that are relatively scarce. Therefore, unskilled workers in a capital-rich country, for instance, will have obvious discontentment with the system and feel that only the interests of the elites are being fulfilled. To these segments of the population, authoritarian leaders and authoritarian forms of society seem to be the only ones that could effectively iron out the problems of free markets.

On the other hand, the reservations of the anti-liberals on the right are more related with the changing social dynamics it has caused. They argue that the foundational premise of liberalism i.e. offering people the liberty to choose their own path in life is shaping humans into separate, autonomous and non-related selves. The pursuit of profit erodes the will to embed in social relations and build communities. The separation from community disrupts cherished beliefs and traditions and creates social fissures, which has led to widespread discontentment.

Even though the rise of populist leaders signals an affirmation to these views; by no means are the ideas of liberalism and liberal democracy dead as many critics claim. There is significant evidence to support its resilience. The vote against Boris Johnson in the UK Parliament for his attempt to subvert democratic means and exit the EU is a case in point. Across the Atlantic, US citizens voted Democrats into the House of Representatives signalling that they would not even award Trump unfettered control of democratic institutions. Even further across the Pacific, citizens of Hong Kong are displaying exceptional exuberance against a regime trying to subvert their democratic rights.

The faith with liberalism also cannot be said to be fully lost. The world sees bursts of support for the liberal view through movements like #MeToo and the student rallies against climate change. A radical transformation in the way society functions is, thus, probably not anywhere near the horizon as many would like to predict. But it must be recognised that there is simmering discontentment against the status quo and the world needs to take the interests of those left behind into consideration through more broad-based developmental mechanisms.

The article was published with Outlook India and The Hans India on September 15, 2019