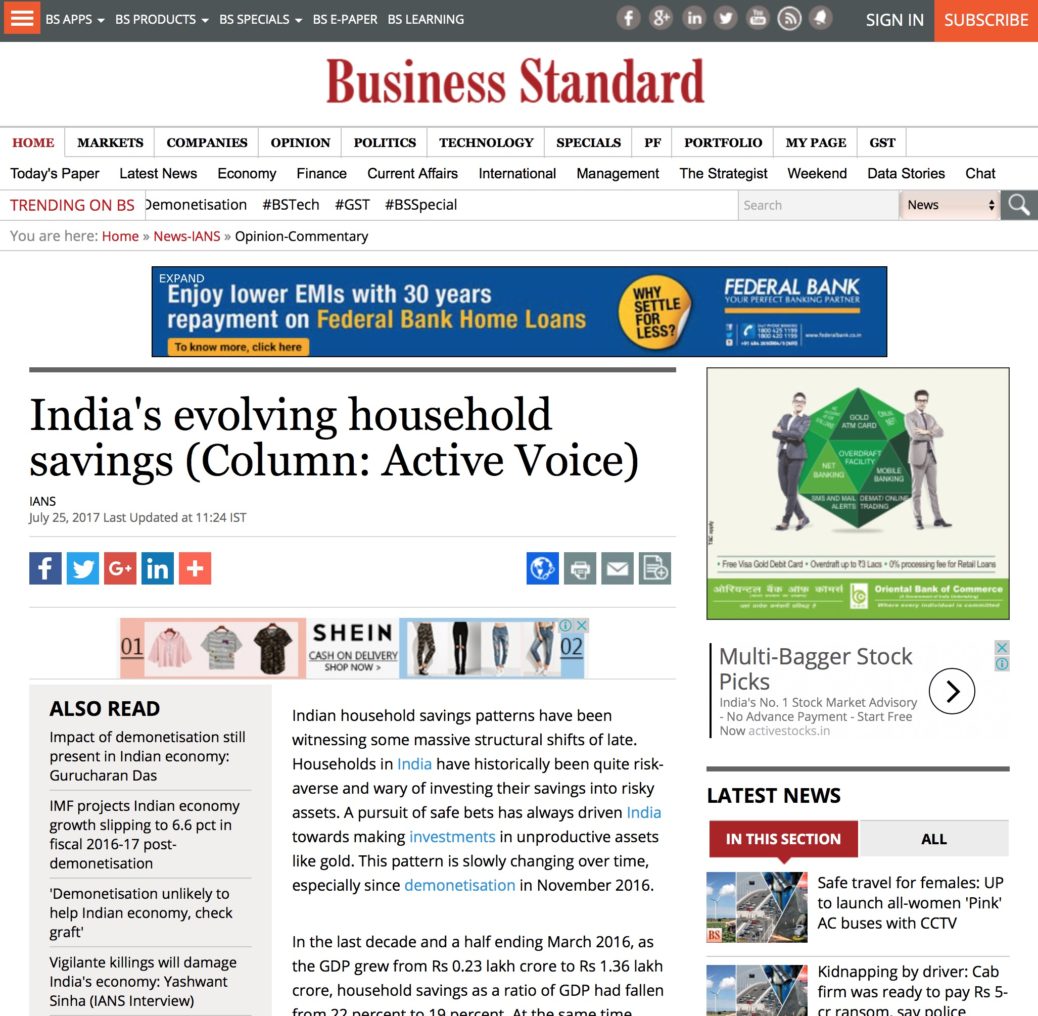 Indian household savings patterns have been witnessing some massive structural shifts off late. Households in India have historically been quite risk-averse and wary of investing their savings into risky assets. A pursuit of safe bets has always driven India towards making investments in unproductive assets like gold. This pattern is slowly changing over time, especially since demonetisation in November 2016.

However, post demonetisation, a non-linear shift towards savings in financial assets has been noticed for Indian households. This is evident from the market performance between October 2016 and January 2017 after foreign investors had withdrawn ₹39,979 crores from Indian equities. Such a significant withdrawal a few years ago would have resulted in a market rout. But this time, the stock markets barely saw a dip of one percent in the four-month period. This is because as foreign portfolio investors (FPIs) exited Indian markets, domestic institutions stepped in to compensate with matching purchases of ₹39, 823 crores.

Mutual funds have been the highest contributory factor to this trend of a domestic move towards higher savings in financial assets. According to the Association of Mutual Funds in India (AMFI) data, net inflows in 2016-17 have reached ₹3.43 trillion, which is an astounding 155 percent rise from ₹1.33 trillion in 2015-16 and the highest ever for the mutual funds industry in India. Interestingly, retail investors have driven this expansion as much as conventional corporate treasuries. This implies a growing proportion of household savings being diverted into mutual funds.

One of the major driving force behind the rising clout of mutual fund has been the growing popularity of systematic investment plans (SIPs). AMFI data shows that monthly inflow though SIPs in April 2017 was ₹4,269 crores as compared to ₹980 crores per month in 2012. SIPs allow investors to make regular investments in small amounts that go into equities instead of making lump sum investments at various points in time. Post-demonetisation, this seems to be an appealing alternative than holding cash or investing in assets like gold and real estate for the risk-averse households across India.

The shift in preferences of Indian households towards financial assets is bound to have a few positive outcomes for the Indian economy. First, as already witnessed, higher domestic investment is making Indian equity markets less vulnerable to foreign fund flows. With mutual funds owning more than 10 percent of the freely tradable shares by value and insurers another 8-9 percent, domestic institutions command more than half the market clout of foreign investors, who own about 40 percent of the shares. This makes Indian markets highly resilient to sudden pull-outs by the latter.

Second, the growing popularity of instruments like SIP is bringing stability in domestic investment patterns as well. Since SIP allows investors to instruct banks to invest a fixed amount each month, the short-termism in investor behaviour has been eliminated. It takes away the temptation to closely watch markets and impulsively react to its ups and downs. This also leaves domestic mutual fund managers with funds to spare at all times in a significant break from the past.

When markets depended on lump sum investments, these investors were usually flush with cash during bull runs and short of it in bad times. They would, thus, be left with no option but to buy at highs and sell at lows adding adversely to the market frenzy. Therefore, market stability is ensured in two ways with a growing preference for financial assets; by acting as a cushion to the volatility of foreign investments and by bringing in maturity in domestic investment patterns.

However, mutual funds are far from being the go-to investment option for Indians. In FY16, MFs accounted for merely 2 percent of the gross financial savings while bank accounts stood at 44 percent and provident funds and insurance at 36 percent. Thus, the potential for growth of financial assets in India is massive. But, that growth will depend on the pace of growing affluence of Indian households since individuals living at subsistence level cannot be expected to invest in risky assets. Nevertheless, the changing pattern of money flows in the Indian equity markets point to a promising future for domestic investors. As John Maynard Keynes famously said, “The importance of money flows is a link between the present and the future.”

The article was published with Business Standard & The Quint on July 25, 2017.