Urbanisation without chaos: How to plan and govern our cities 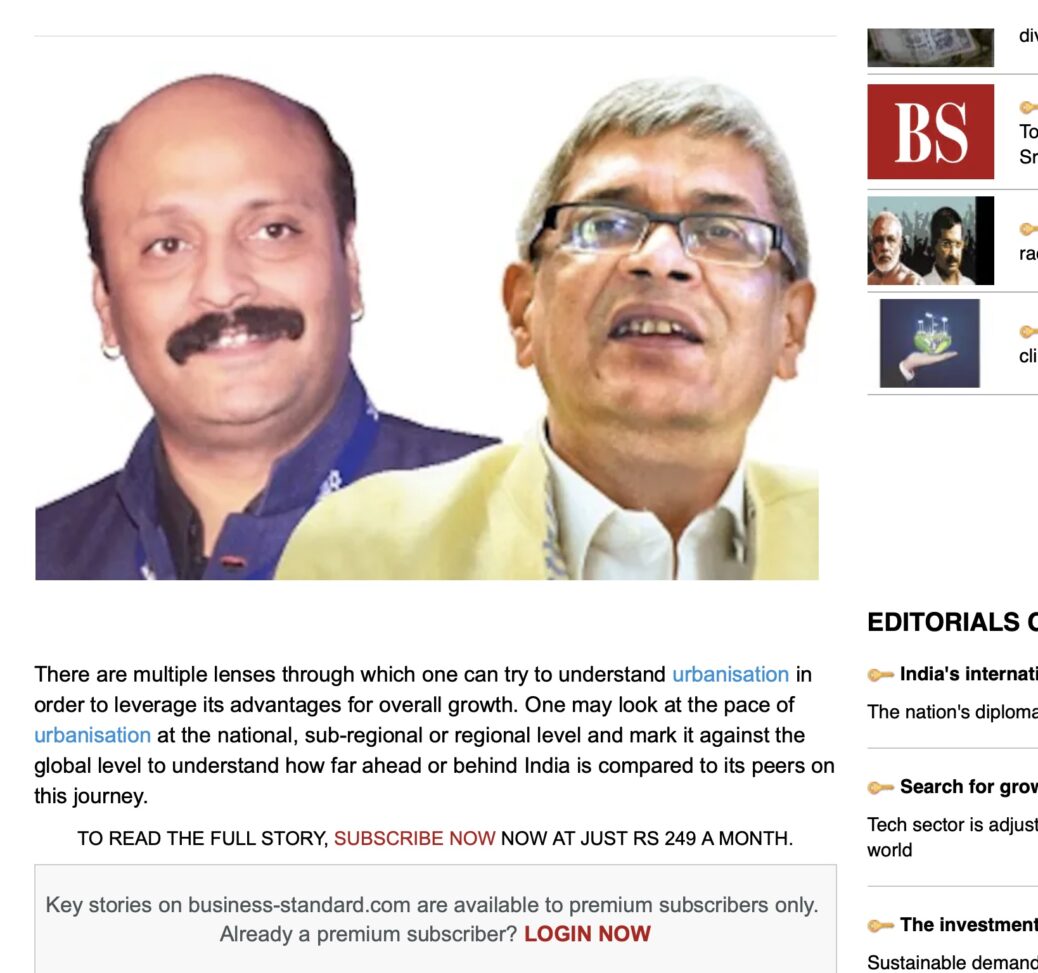 There are multiple lenses through which one can try to understand urbanisation in order to leverage its advantages for overall growth. One may look at what has been the pace of urbanisation at the national, sub-regional or regional level and mark it against the global level to understand how ahead or behind we are from our peers. In this respect, we are aware that India’s rate of urbanisation is about 35% while the global average is close to 56%. Another way to look at it, is to understand the global variations associated with urbanisation – what triggered the rate of urbanisation in a particular country at what point in time? For instance, urbanisation in Europe is closely linked to the coming of the Industrial Revolution in the eighteenth century, a process that began in the United Kingdom and later got replicated in Europe and the world. Yet another way at our disposal is to then understand what happens once we start getting urbanised – namely, how do we start planning and governing our cities for its people?

Urbanisation is a dynamic force that is driven by many factors that positively impact the development of any region – employment opportunities, better availability of resources, increased aspirations and a desire for ease of living, among others. All these factors hugely depend on the efficiency of the governance systems in that region. These governance systems need to be understood from dual perspectives – what kind of administrative structure is developed in that city which is linked with the second perspective of what kind of services are facilitated through this administration. Guiding our understanding through these perspectives becomes all the more essential, especially when we look at extended urbanisation – in the form of suburbanisation and peri urbanisation. This ranges from management of transportation (how many busses should be available per 10,000 people) to strengthening the local bodies to provide proper access to inclusive fiscal services (through urban cooperative banks) and health services (through urban health centres). In more recent times, the level of efficiency in the governance structure has also played an essential role in stopping the spread of infectious diseases.

Additionally, as the boundaries of the idea of urbanisation are expanding (as mentioned before, in the form of suburbanisation and peri-urbanisation), there needs to be a concentrated focus on how are we equipping our urban governance systems. This argument particularly emerges in the context that as different kinds of urban centres are emerging – suburbs to cities and towns – the urban peripheries are altering. While this expansion can be seen as a positive occurrence for the pace of urbanisation in the country, if it remains unregulated, the developmental advantages are also going to be unevenly distributed. To manage and monitor this uneven spread requires a robust governance core in the sector.

In India, we see many such clusters of densely populated centres caught between rural and urban areas – commonly called Peri-Urban Areas (PUA) – that are going through a transformation in terms of increasing migration but also remain largely isolated from the core urban centres. These areas emerge in the form of unauthorised settlement colonies, census towns, hamlets or even slums. Areas like these emerge as many people are not able to afford the comparatively high-cost living in the cities and remain engaged mainly in agro-based activities, among these are some migrants that pursue work other than farm related but choose to live in the periphery of a city. A study by the East-West Center has also looked at PUAs in five cities – Patna, Guwahati, Chandigarh, Ahemdabad and Chennai. They have argued that these cities have expanded beyond their carrying capacities, and while PUAs have offered them space for using resources like water and land to set up industries, these areas have only received degradation in return. Our aim is not to examine the interface of cities and PUAs but to establish that a governance ambiguity widens the gaps between these areas resulting in a highly scattered and unorganised urbanisation. Governance ambiguity also emerges, especially in the case of India, as there is still ambiguity over how urban is defined. Here, we have more or less tend to depend on our legislation related to grassroot governance. State-by-state variations in the demographic and other factors determining the type of municipality founded are significant. For instance, according to the 74th Amendment Act (1992), there are three different types of municipalities: Nagar Panchayats for rural to urban transitional areas, Municipal Councils for smaller urban areas, and Municipal Corporations for larger metropolitan areas. With the constitution of Nagar Panchayats, the PUAs received recognition. However, these continue to grapple with issues of inefficiency, poor funding and general aloofness from the idea of welfare governance.

Urbanisation globally has been a lateral spread rather than a uniform expansion making it difficult to leverage this for growth and shared prosperity. When we come to India, we see that the pace at which cities are expanding has been a result of the overflowing population, coupled with a scarcity of land in metro cities – leaving immense pressure on the PUAs to absorb the population as well as meet their expectations of providing access to resources, jobs and general ease of living. In the background of relatively weaker governance systems in these areas, the need is to reformulate urban policies that are centred on PUAs in order to facilitate a sustainable expansion of cities and the development of these areas. This will only be driven if we acknowledge that governance approaches need to be embedded in the urbanisation discourse to ascertain the pace of urbanisation and how we urbanise.

The article was published with Business Standard on October 20, 2022.