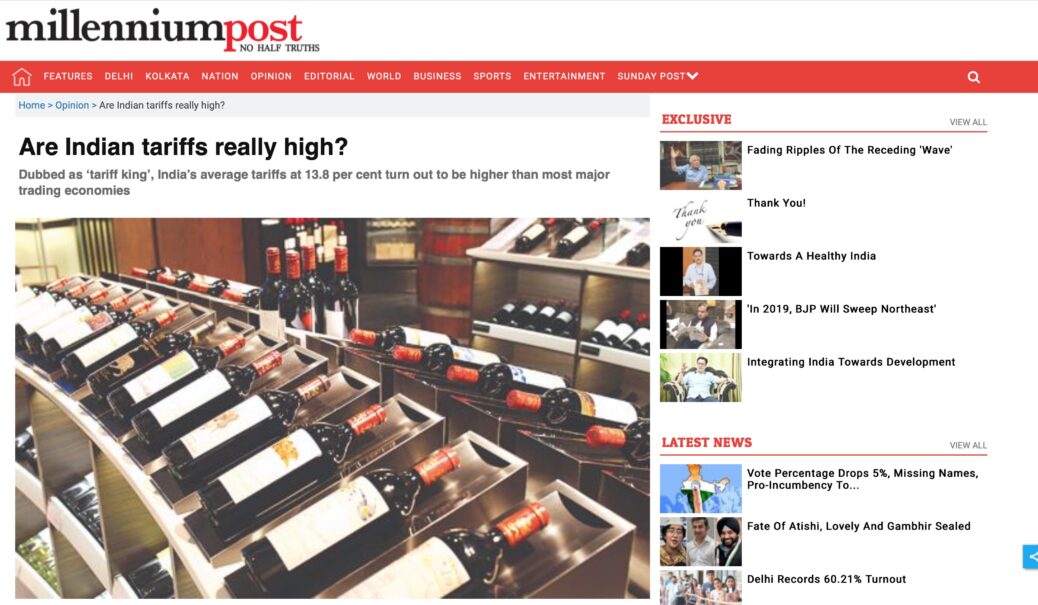 The Trump-driven trade war does not seem to relent. In the latest development, US has raised tariffs on $200 billion worth of Chinese imports to 25 percent; up from 10 percent imposed last year. China, on its part, has threatened to retaliate. India has never been far from the skirmish.

In fact, just a few days ago the US Commerce Secretary Wilbur Ross accused India of following restrictive trade policies that create significant market access barriers for foreign companies. The evidence of this claim, according to him, lay in the fact that the US was India’s biggest export market, accounting for a fifth of its total exports, while India was only the 13th largest market for American exports.

India has been called out numerous times by the Trump administration before for its tariffs and duties on imports. In October last year, Trump himself dubbed India the ‘tariff king’. In March, he even expressed his intent of ending the favourable treatment that India enjoyed under the Generalized System of Preferences (GSP), which allows many products from developing countries like India to enter the US duty-free.

Although the decision to revoke the GSP has been postponed until after the new government comes into power in India, the trade war is beginning to impact the country more directly. The fact that has particularly irked Trump is the substantial trade deficit that the US has with India to the tune of $24.2 billion in 2018. The question, thus, remains whether there is any truth to the claims of Trump and Ross with respect to India’s tariff structure.

Merely looking at the highest tariff rate provides only a limited view to the country’s tariff structure. A better representation that takes into account all imported goods can be obtained by assessing the average tariff and trade-weighted tariff of the country. India’s average tariffs at 13.8 percent turn out to be higher than most major trading economies like China (9.8 percent) and US (3.4 percent). South Korea (13.7 percent) is one of the few major economies that come close to India’s average tariffs. However, when the tariff rates are weighted by the volume of traded goods for a more accurate representation of imposed tariffs, the trade-weighted average tariffs for India fall to 7.6 percent. This is much below Brazil’s 10.3 percent and South Korea’s 9 percent. Moreover, the trade-weighted average tariffs for industrial goods, which account for over 90 percent of Indian imports, is merely 5.5 percent.

Finally, the Trump administration also needs to understand that trade imbalances are rarely a result of policy rather than competitive and comparative advantage. The bulk of Indian exports to the US comprise of goods like gems and jewellery, textiles and apparel, IT services, generic drugs and refined petroleum products, where India possesses a comparative advantage of labour cost. The US, on the other hand, finds similar advantage in export of high-end manufactured goods like aircraft, medical devices, patented drugs and so on as it has a comparative advantage in their production. Tariffs have evidently played a little role in defining such a trade portfolio.

The US is also an exported of capital to India in the form of foreign direct and portfolio investment. These provide huge returns to investors back in the US. Thus, running deficits in merchandise trade with the developing world is not a harmful outcome for US but a reflection of where its competencies lie. Consumers are the only ones who gain with higher and freer trade.

That being said, India must also make sure it reduces import duties and tariffs wherever it possible. In the automobile sector, for instance, Indian auto makers needs not be protected with 60-75 percent import duties. The US is a major trade partner of India and both economies would be better off by adopting an accommodative stance rather than a combative one. The bilateral trade between the two countries has grown over six-fold in the last two decades from $20 billion in 2000 to $126 billion in 2017. A continued growth of this trade relationship will be a big win-win for the largest economy in the world and the fastest-growing one.

The article was published with  Business Standard, Outlook Indiaand Millennium Poston May 11, 2019.