Getting the airline sector out of a tailspin 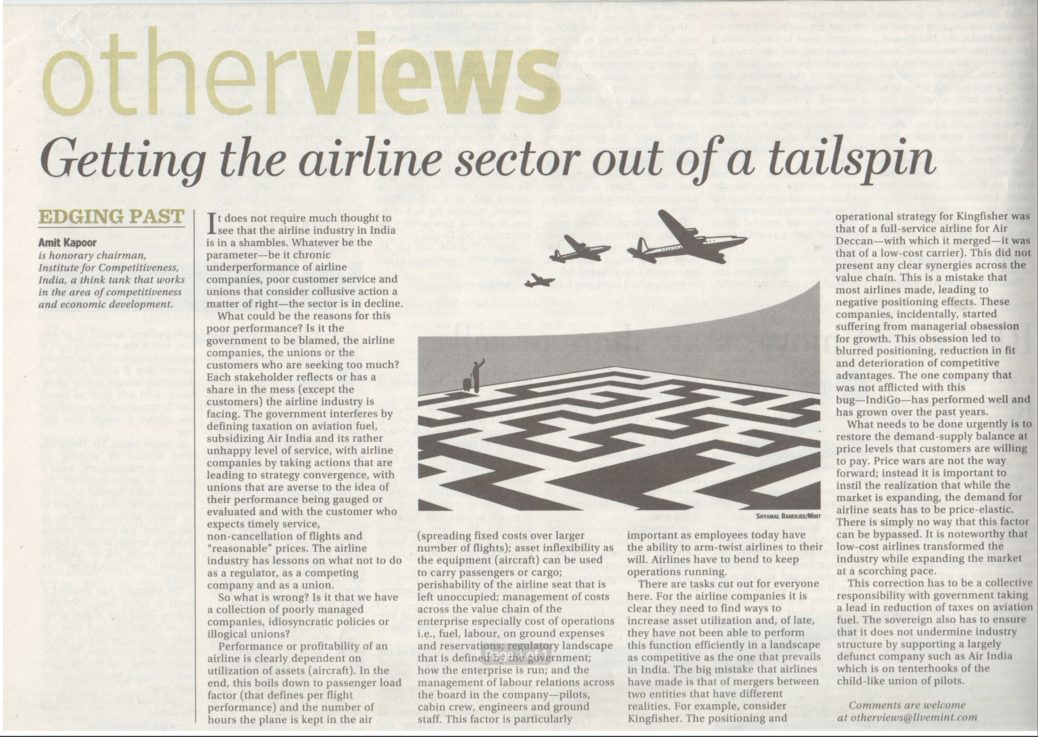 It does not require much thought to see that the airline industry in India is in a shambles. Whatever be the parameter—be it chronic underperformance of airline companies, poor customer service and unions that consider collusive action a matter of right—the sector is in decline.

What could be the reasons for this poor performance? Is it the government to be blamed, the airline companies, the unions or the customers who are seeking too much? Each stakeholder reflects or has a share in the mess (except the customers) the airline industry is facing. The government interferes by defining taxation on aviation fuel, subsidizing Air India and its rather unhappy level of service, with airline companies by taking actions that are leading to strategy convergence, with unions that are averse to the idea of their performance being gauged or evaluated and with the customer who expects timely service, non-cancellation of flights and “reasonable” prices. The airline industry has lessons on what not to do as a regulator, as a competing company and as a union.

So what is wrong? Is it that we have a collection of poorly managed companies, idiosyncratic policies or illogical unions?

Performance or profitability of an airline is clearly dependent on utilization of assets (aircraft). In the end, this boils down to passenger load factor (that defines per flight performance) and the number of hours the plane is kept in the air (spreading fixed costs over larger number of flights); asset inflexibility as the equipment (aircraft) can be used to carry passengers or cargo; perishability of the airline seat that is left unoccupied; management of costs across the value chain of the enterprise especially cost of operations i.e., fuel, labour, on ground expenses and reservations; regulatory landscape that is defined by the government; how the enterprise is run; and the management of labour relations across the board in the company—pilots, cabin crew, engineers and ground staff. This factor is particularly important as employees today have the ability to arm-twist airlines to their will. Airlines have to bend to keep operations running.

There are tasks cut out for everyone here. For the airline companies it is clear they need to find ways to increase asset utilization and, of late, they have not been able to perform this function efficiently in a landscape as competitive as the one that prevails in India. The big mistake that airlines have made is that of mergers between two entities that have different realities. For example, consider Kingfisher. The positioning and operational strategy for Kingfisher was that of a full-service airline for Air Deccan—with which it merged—it was that of a low-cost carrier). This did not present any clear synergies across the value chain. This is a mistake that most airlines made, leading to negative positioning effects. These companies, incidentally, started suffering from managerial obsession for growth. This obsession led to blurred positioning, reduction in fit and deterioration of competitive advantages. The one company that was not afflicted with this bug—IndiGo—has performed well and has grown over the past years.

What needs to be done urgently is to restore the demand-supply balance at price levels that customers are willing to pay. Price wars are not the way forward; instead it is important to instil the realization that while the market is expanding, the demand for airline seats has to be price-elastic. There is simply no way that this factor can be bypassed. It is noteworthy that low-cost airlines transformed the industry while expanding the market at a scorching pace.

This correction has to be a collective responsibility with government taking a lead in reduction of taxes on aviation fuel. The sovereign also has to ensure that it does not undermine industry structure by supporting a largely defunct company such as Air India which is on tenterhooks of the child-like union of pilots.

The article was published with Mint in the issue dated June 1, 2012.