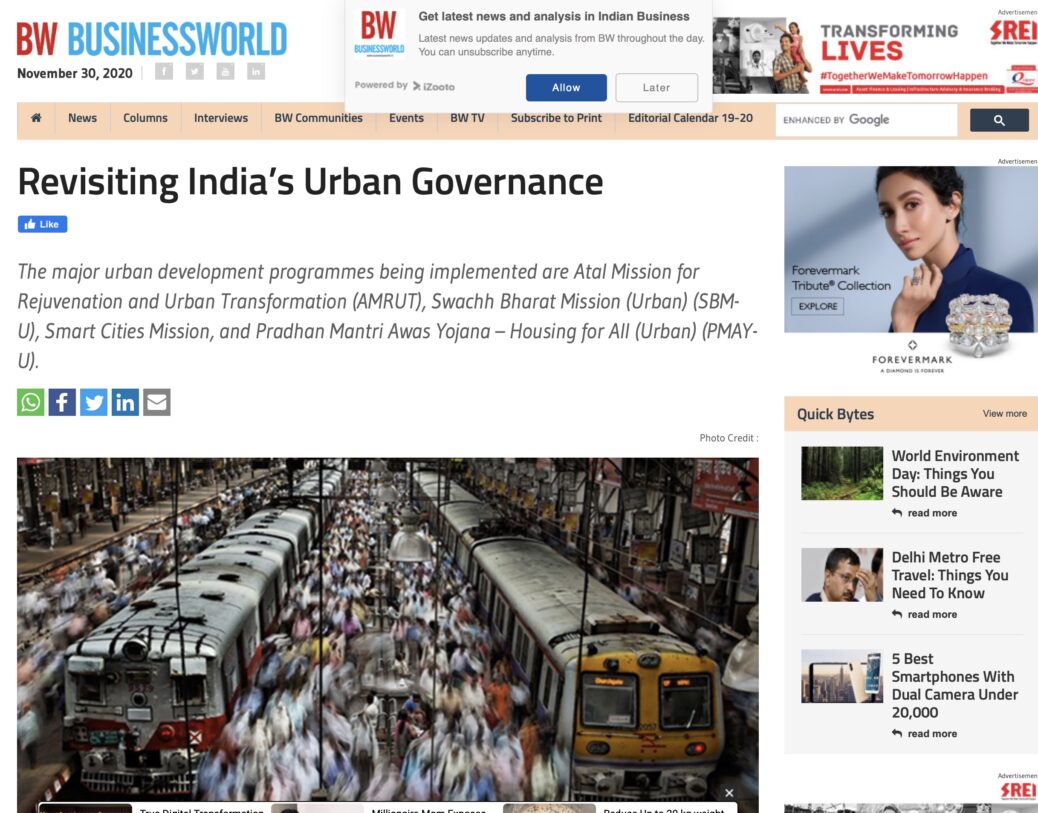 With the current urbanization rate, India is predicted to have the highest urban population by 2050. As per the United Nations’ 2011 Revision of the World Urbanisation Prospects report, 497 million more residents will shift to cities by that time. As proved by the increasing contribution of urban economy to the GDP, the burgeoning cities have been the backbone of our growing economy. So, it is no surprise that trends in urbanization are only rising with time. While this means more growth, it also implies more pressure on the resources in urban areas, and a greater need of planned urbanization to ensure basic amenities to the residents. Hence, there is no better time than now to revisit the urban development policies of India.

In the five to six years of their implementation, the programmes have made progress in the areas of housing, sanitation, mobility, water supply, etc., but some of the intended targets are yet to be achieved. For instance, AMRUT was supposed to meet all its targets by 2020, but having failed to do, its mission period has been extended by two more years. On the other hand, the number of houses sanctioned in the last five years under PMAY-U is nearly eight times more than those sanctioned under other urban housing schemes in the last 10 years. Thus, we have achieved some milestones but also have a long way to go, to keep up with the rapid urbanization trends.

Some of the common issues reported in their implementation are under-utilization of funds, lack of coordination between implementing agencies, and lack of scope for accounting for inequalities. The issues mentioned are mostly rooted in the lack of involvement of local governments in the planning or implementation of the programmes. The 74th Constitutional Amendment Act, 1992 added urban local bodies (ULBs) as the third tier of government, but did not add any substantial provisions to empower them enough to govern cities. The Constitution specifies 18 broad functions that can be performed by the ULBs, but allows the state governments to decide which of those functions should be devolved. State also has power over the devolution of tax revenues and grants-in-aid to the ULBs, so the latter has limited access to financial resources.

The urban development programmes have outlined a larger role for the local governments, to ensure decentralization. However, programme components like the creation of Special Purpose Vehicle (SPV), a limited company, to manage the implementation of the projects under the Smart Cities Mission works to further take away powers from the local government. The Mission also allows for local governments to raise a proportion of the funds for projects, but it does not make provisions to either accord greater financial autonomy to ULBs or augment their capacity to resources, thus resulting in public funds being the main source of funding. States also enjoy the discretion to define the criteria for assigning the types of governing bodies to urban settlements. They can even exclude particular areas from the municipalities’ purview by categorising them as ‘industrial township’ under an appropriate state law.

The unregulated power of state governments over the ULBs’ scope of governance and finances has prevented the enforcement of decentralization. It manifests in multiple operational issues that ultimately result in suboptimal outcomes. In order to improve the quality of life in cities, there is a need to revisit the 74th Amendment Act, but in the meanwhile, programmes need to delineate more power to ULBs, to give them a larger role in urban development.

The article was published with Business World on November 30, 2020.